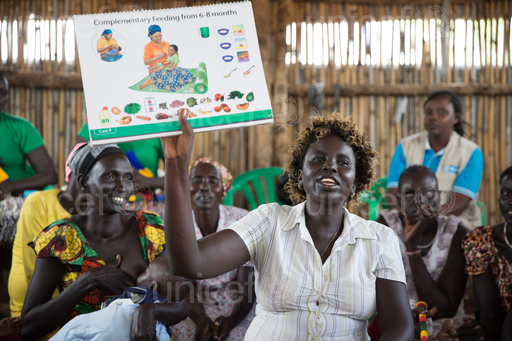 May 18, 2017. A combined group of South Sudanese refugees and Ugandans take part in a class about breast feeding. Nyumanzi Refugee Settlement, Adjumani District. Conflict and famine in South Sudan have led to an exodus of refugees into Uganda. Credit: JAMES OATWAY/UNICEF

Hailing the practice as an investment that ought to be supported by governments, the UN estimates that 4.70 dollars can push up rates of breastfeeding to 50 percent by 2025. Currently, only 23 countries can claim a rate above 60 percent. Overall, only 40 percent of children less than six months old are exclusively breastfed today.

In the world’s largest emerging economies—China, India, Indonesia, Mexico and Nigeria—236,000 children die each year from a lack of investment in breastfeeding. Together, the countries lose more than 119 billion dollars annually.

A healthier workforce, nurtured from the very beginning of childhood, can add to a prosperous economy. Breastfeeding ensures ammunition against deadly diseases like diarrhoea and pneumonia, which are two major causes of death among infants. Similarly, it reduces the risk of ovarian and breast cancer among mothers.

“We need to bring more understanding to raise awareness about the importance of breastfeeding—the baby should be fed with mother’s milk within the first hour of being born. Unfortunately, for many social and cultural reasons, this is not put to diligent practice. This is a sheer missed opportunity,” France Begin, a Senior Nutrition Adviser for Infant & Young Child Nutrition at UNICEF, told IPS.

The obvious benefits of breastfeeding, such as providing nutrition and bolstering development of the brain, are well known. Still, it is commonly mistaken as a woman’s job alone.

“Countries like Nepal and Kenya have done a wonderful job with policies to protect lactating mothers. In Kenya for example, all workplaces in the private sector have a room dedicated to mothers who have to breastfeed their children. In a way, this is our message too—you have to support women, and can’t simple leave it up to them,” said Begin. Indeed, providing lactation education classes and better paid maternity leave can go a long way.

Across all income levels, breastfeeding adds to an increase in intelligence, measured by a 3-point Intelligence Quotient (IQ) increase on average. Better academic performances, ensured by strong educational opportunities and programs, can lead to a better life for all members of the family.

“If you don’t make a strong commitment, it is a sheer drain to the child’s life, the families, and in the end, the economy,” resounded Begin.

This is why the report has deemed the practice as a “smart investment.” As the rate of breastfeeding remains stagnant in over two decades, it has become imperative to rally support and raise awareness. The UN has stepped up to do so by observing World Breastfeeding Week from August 1 until August 7.