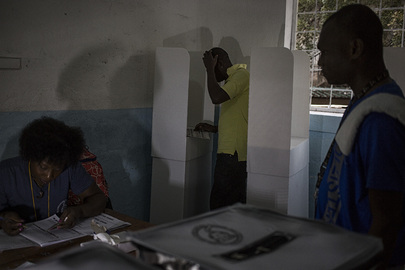 UNITED NATIONS, Oct 16 2017 (IPS) - The UN peacekeeping mission ended its operations in the Caribbean nation of Haiti after 13 years on October 15.

The UN Stabilization Mission in Haiti (MINUSTAH), which aimed to bring stability to a politically chaotic Haiti of 2004, will transfer power to the UN Mission for Justice Support in Haiti (MINUJUSTH), a much smaller successor mission that is going to assist the government on security issues.

“Haiti is now in a position to move forward and consolidate the stability that has been obtained, as a framework for continued social and economic development,” Sandra Honoré, the head of MINUSTAH, said in a recent interview with UN News.

In spite of the mission’s successful efforts at democratization and professionalization of the National Police, it was not without troubles and controversy.

Most prominently, the peacekeeping mission admitted to introducing a strain of cholera to the country. The cholera epidemic, which occurred immediately after the devastating earthquake in 2010, killed nearly 10,000 people and affected 800,000, or roughly one in every twelve Haitians. Although the UN has pledged a two-year project to improve water and sanitation services, the total costs of the project remain severely underfunded.

And in November 2007, just three years into the mission, 108 military personnel from an Asian country were sent home after being accused of sexual exploitation of minors. Although the UN expressed “outrage” at the charges, the world body has no political or legal authority to penalise military personnel. Most of them have escaped punishment because national governments have refused to prosecute.

Meanwhile, Haiti has continued to suffer the devastating impacts of natural disasters that require international funding and relief efforts.

The April 13 resolution that was adopted by the the UN Security Council (UNSC) this year ordered the gradual removal of the mission from the nation. Nikki Haley, the US representative to the UN, told the UNSC that the political context and Haiti’s “peaceful transition of power” in the November 2016 presidential election had finally cemented the decision.