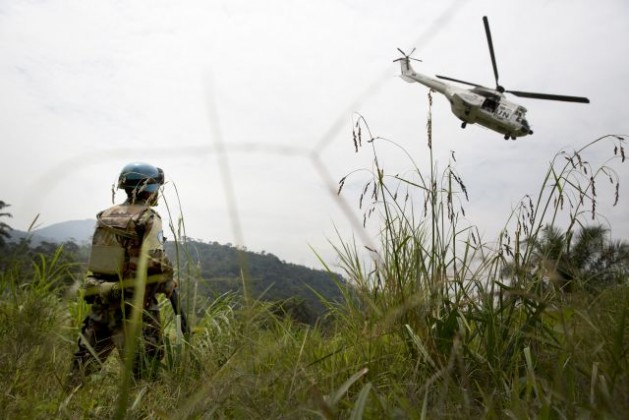 A Uruguayan peacekeeper with UN Organization Stabilization Mission in the Democratic Republic of the Congo (MONUSCO) watches as the helicopter carrying Under-Secretary-General for Peacekeeping Operations, Hervé Ladsous, makes its way back toward Goma after Mrs. Ladsous’ visit in Pinga, North Kivu Province. Credit: UN Photo/Sylvain Liechti

UNITED NATIONS, Jun 17 2015 (IPS) - Back in November 2007, about 108 military personnel from an Asian country, serving with the U.N. peacekeeping mission in Haiti, were deported home after being accused of sexual exploitation and sexual abuse of minors.

After their return, one of the expelled peacekeepers was quoted in a local newspaper as saying, rather defiantly, “What do you expect us to do when the U.N. is providing us with free condoms?”

“I believe that an unstable place with a weak (or no) government may create a sensation of lack of accountability, of power over the local population and a few individuals might feel free to engage in unacceptable behaviour." -- Barbara Tavora-Jainchill

But then all those free condoms were being provided to prevent sexually-transmitted diseases and not to encourage sexual abuse.

As a result of the widespread sexual abuse with peacekeeping missions, the United Nations plans to set up an independent review panel calling for recommendations specifically to prevent these crimes and also to hold those responsible accountable for their deeds and mete out punishments.

But as a preventive measure, would it help if peacekeepers and U.N. staffers are sent on overseas missions along with their wives, partners and families?

Pursuing this line of thinking, Joe Lauria, U.N. correspondent for the Wall Street Journal, told IPS, “Perhaps the U.N. should look into making it possible for U.N. peacekeepers to have their wives and girlfriends and children live with them during their deployment.”

He said he realised it would be an added expense for the U.N. to transport them and perhaps to find suitable housing on U.N. peacekeeping bases.

“But the potential benefits of cutting down on what is an epidemic — of U.N. peacekeepers sexually abusing the people they are sworn to protect — could be immense. It is difficult to understand why the U.N. has never thought of this before.”

Lauria also said there is a longstanding tradition throughout military history of soldiers allowing their wives to accompany them– even to the front.

Two examples are in ancient Rome and in the American Civil War. And U.N. peacekeepers are rarely in combat situations, so the logistics are simpler, he said.

Today U.S. troops stationed at bases abroad, such as in Germany or South Korea, are allowed to live with their families. The wives and girlfriends of U.N. peacekeepers could be expected to live from the salaries of the peacekeepers, perhaps with an additional stipend, he argued.

“It would be troubling for the U.N. not to look into this possibility given all the negative fallout for the organisation, not to mention the serious harm done to the victims of U.N. peacekeeper’s sexual abuse,” said Lauria.

When he raised this issue at a press briefing last week, U.N. spokesperson Stephane Dujarric said that virtually all of the peacekeeping operations, with a couple of exceptions like Cyprus, are “non‑family duty stations for the civilian staff.”

“You raise a point that’s interesting, that I don’t know the answer to. I don’t believe uniformed peacekeepers or police officers are able to bring their spouses along,” he said.

Pressed further by Lauria, Dujarric said: “I think I see where… where you’re going, but I think the issue of abuse of power, of sexual abuse needs to be fought, regardless of what those rules may be.”

Ian Richards, president of the Coordinating Committee of International Staff Unions and Associations (CCISUA), representing 60,000 staff working at the United Nations, told IPS that as far as it concerns U.N. civilian staff, “I’m not sure you can draw a link between the two.”

“We have over 21,000 civilian colleagues in field and peacekeeping operations, doing a great job and almost all in what are called non-family duty stations. Yet reported sexual abuse by staff, while horrific, remains extremely low,” he said.

“So these are very specific cases rather than a generalised trend. All U.N. staff are aware of the organisation’s zero-tolerance approach to sexual abuse and sign a declaration on this when they’re recruited.

“Therefore, I’m not sure that absent spouses is an issue in this sense. In any case, non-family duty stations are declared as such because they are in conflict zones or prone to rebel or terrorist activity. They’re not places to bring spouses or children,” Richards added.

A U.N. staffer, speaking on condition of anonymity, told IPS there were some U.N. civilian staffers, based in a virtual war zone in Iraq, who housed their families in neighbouring Kuwait, but at their own expense.

But staffers serving in these missions are well remunerated with “hazard pay allowances” (HPA) and “mission subsistence allowances” (MSA).

A senior U.N. official told IPS it is very unlikely that wives and families will be permitted in overseas missions, specifically high risk missions, because it would be difficult to ensure their security (and it will double or triple the U.N.’s current burden of protecting staffers).

Barbara Tavora-Jainchill, president of the U.N. Staff Union in New York, told IPS even though being away from the family brings stress, “I believe that an unstable place with a weak (or no) government may create a sensation of lack of accountability, of power over the local population and a few individuals might feel free to engage in unacceptable behaviour.

Meanwhile a High-Level Independent Panel on Peace Operations, chaired by former President of Timor-Leste Ramos-Horta, has released a report with a comprehensive assessment of the state of U.N. peace operations and the emerging needs of the future.

At a press conference Tuesday, Ramos-Horta emphasised the United Nations had “zero tolerance for sexual exploitation and abuse.”

He said sexual abuse by peacekeepers “rocks and undermines the most important power the United Nations possesses: its integrity.”