UNITED NATIONS, Aug 7 2017 (IPS) - While voters in Venezuela overwhelmingly rejected President Nicolás Maduro’s plan to amend the constitution recently, similar tensions and a clash between protesters and state authorities appears to be brewing across the Atlantic in the West African nation of Mauritania. 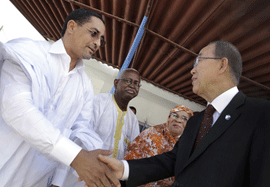 The United Nations Human Rights Office (OHCHR) has sounded alarm about the apparent suppression of dissent, and the excessive use of force by authorities to quash protests ahead of the controversial vote.

“We have witnessed protest leaders with broken arms and bruised faces after they were beaten up by police during demonstrations. We are concerned that as tensions and protests escalate, the authorities may resort to further use of such excessive force. We call on all sides to refrain from the use of violence and to take measures to de-escalate the situation,” Ravina Shamdasani, a human rights officer at OHCHR, told IPS.

Mohamed Ould Abdel Aziz, the president of Mauritania, responded to a failed proposal to amend the constitution by raising the stakes to a referendum vote, scheduled for August 5th.

The proposal, which seeks to abolish Majilis al-Shuyukh, or the upper house of the parliament, was approved by the Jamiya Al Wataniya, the lower house. The bill collapsed in the upper house earlier in March this year as 33 senators out of a total of 56 rejected it.

The bill, now up for a referendum vote, also proposes changes to the country’s flag by adding a red stripe to the top and bottom to pay homage to the martyrs who fought for the country’s successful independence from France in 1960.

Since July 21, as protests escalated, the government has refused air time on TV to dissenters, and has made arrests.

The UN urged the government to conduct elections peacefully, and in compliance with an international order to hold transparent elections.