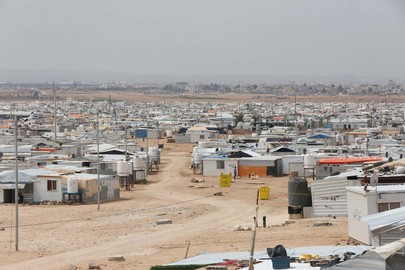 A view of the Zaatari Refugee Camp in Jordan, where nearly 80,000 Syrian refugees are living. Credit: UN Photo/Sahem Rababah

The camp was opened by the Norwegian Refugee Council (NRC) and the United Nations (UN) to cope with the humanitarian crisis in Syria—which has recorded the world’s largest refugee movement since WWII—with a clear goal to house refugees temporarily.

Between then and today, more than 80,000 Syrian refugees have settled in the camp, making it the world’s largest Syrian refugee camp.

Far from being a makeshift settlement today, the camp has a bustling economy, with many teaching young children—who make up more than half of all refugees—to read and write. The NRC has set up educational centers and centers for vocational activities.

“Now the camp is completely different. There are many more facilities and services. There are no more tents, everyone is living in prefabs. We feel more at home now,” Anwar, one of the first refugees to enter the camp from Daraa, says in a report by the NRC.

“We struggled at the beginning. We used to have shared washrooms. Water lacked sometimes. We had no electricity. The shops weren’t there,” he continued.

All that, of course, has changed. Today, Anwar teaches carpentry and painting to others. Similarly, because many haven’t been able to leave the camp, new businesses have thronged the area.

Still, the very permanence of the camp illustrates the protracted nature of the Syrian conflict, now in its seventh year. Many children have been born in the camp, and the UN has urged other governments to share in this humanitarian responsibility to ensure a better life for all.