Independent media is being closed down. Last weekend a leading opposition politician was arrested. Cambodia's commitment to defend human rights and participate in the Global Deal is coming under question. 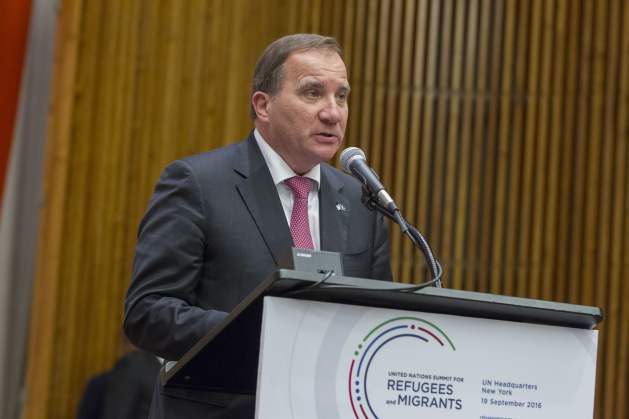 PHNOM PENH, Sep 5 2017 (IPS) - Swedish Prime Minister Stefan Löfven made a special effort to reach this global agreement between countries, unions and businesses. The bearing idea is that by initiating dialogue in society, salaries can be raised, business profits improved and political stability strengthened.

Cambodia is one of sixteen countries that has signed the agreement. At this moment though, Cambodia is in reverse mode. Several experts have warned that Cambodia is turning into a dictatorship.

”You can not be part of the Global Deal if you violate all basic labour rights”, says Oscar Ernerot of the Swedish Trade Union Confederation LO, who still does not want Cambodia excluded from this international initiative.

Over the weekend, over one hundred policemen were involved in arresting the prominent member of the opposition Kem Sokha. He is being accused of treason and the authorities claim that he has planned to overthrow the government of Hun Sen, which has been in power for over 30 years.

There is a real risk for the entire Global Deal initiative to fall apart if the participating countries are in violation of the most basic labor rights. Oscar Ernerot - Swedish Trade Union Confederation LO
These charges of treason are refuted by the opposition, who claim that the government is setting the scene to stage a victory in the coming elections in July 2018.  The latest arrest seems to be part of a conscious drive to strike at the growing voices of discontent.

Over a period of a few weeks, about 30 radio stations considered to favour the opposition have been closed. Arbetet Global recently wrote about the outspoken newspaper The Cambodia Daily that all of sudden was ordered to pay a hefty tax.

Developments have caused much worry and the European Union warns of the waning democratic process in the country. Human rights defenders like Amnesty claim that the authorities are utilizing the judicial system to punish and silence political critics.

This curtailing of freedoms of independent unions and human rights organisations is having effect.

Oscar Ernerot at Swedish LO iterates that those who join the Global Deal, do so with the stated intention of protecting human rights and defending labor rights as well as promoting a societal dialogue.

Despite the change for the worse, he doesn’t feel Cambodia should be disqualified from participation.

”No, I don’t think so. We need to have a long term perspective. If they were thrown out of the Global Deal, the possibility to influence their development would be even less. Our position is that the Swedish government has to put more pressure on the Cambodian government and pose tough questions on why they are breaking their own promises.

According to Oscar Ernerot, there is though a real risk for the entire Global Deal initiative to fall apart if the participating countries are in violation of the most basic labor rights.