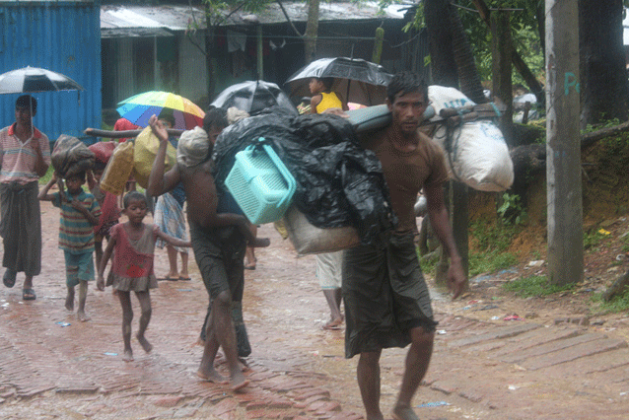 Rohingya refugees trudge through the rain and mud as they arrive at Kutupalong camp in Bangladesh after days on foot. Credit: UNHCR/Vivian Tan

We learned today that you will address the Rohingya issue via television in Myanmar on 19 September – over 144 hours from now.

We also learned that you will not attend the upcoming UN General Assembly (UNGA) in New York, a world body that listened to you in rapt attention only a year ago, marvelling at your words when you spoke of peace and “our planet as a place to be shared by all.”

While your presence in Myanmar is critically important at such tragic times when the UN estimates over 1000 killed and over 400,000 dispossessed and homeless people have fled across the border in Bangladesh, the General Assembly will have the same powerful people who worked not only for your freedom but also applauded when you were honoured with the Nobel Peace Prize.

Those very people are now calling for you to join in the effort to stop what the UN has described as a text book example of ethnic cleansing. Fellow Nobel laureates have done the same, including Archbishop Desmond Tutu, who despite his advanced age and withdrawal from public life felt he had to speak to you as a sister, solely for humanitarian reasons, and the young Malala Yusufzai, who has repeatedly called for you to step in and protect the persecuted. Ramos Horta joined Mohammed Yunus urging you to start a peace process in Rakhine State or for the UN Security Council to take action.

Jody Williams, Shirin Ebadi, Mairead Maguire, Leymah Gbowee and Tawakkol Karman signed a letter asking “How many Rohingya have to die; how many Rohingya women will be raped; how many communities will be razed before you raise your voice in defence of those who have no voice?”

Perhaps some personal encounters with the many who believed in you – and who will be at the UNGA – might help you to comprehend their disbelief and deep concern of what is happening to the Rohingya. Recent images from the Rakhine region are heart breaking. Amongst the innumerable horrific images of violence against the Rohingya, one shows how one-day old twins are being transported to safety in a coir basket while in another image a rickety son carries in baskets hanging at two ends of a bamboo pole his too-frail-to-walk parents. He had fear in his eyes but he did not abandon his parents to protect only himself; he is a hero.

Call to stop the killings now, not 144 hours later; speak for humanity, even if this means standing at the gate of your house in Yangon, an image that became a symbol of freedom when you were not free. If this leads you to being relegated again to confinement in your compound, remember the same people attending the UNGA will speak and work for your freedom.

The UNGA could be the best opportunity for you to hear all those like the Indonesians, Malaysians, Maldivians, Turks and so many others from distant parts of the world on why they are distraught and disturbed about the violence against the Rohingya in Myanmar, and in turn for them to hear from you how you are working to end the violence against innocent men, women and children and what you are doing to help them live with dignity.