Good Men Should Not be Quiet Spectators in Sexual Assaults

UNITED NATIONS, Oct 20 2017 (IPS) - The pain and anger of more than a million people who tweeted #MeToo in the last week have crowded social media with personal stories of sexual harassment or assault.

This virtual march of solidarity marks both the urgency of finding a shared voice and the hidden scale of assault that did not previously have a register. When women are almost invisible, when they are not really seen, it seems that people do not have to care what happens to them. 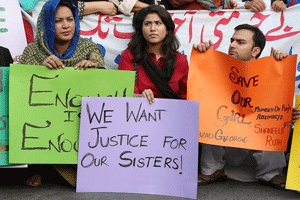 Protesters gather outside the Lahore Press Club in the capital of Pakistan’s Punjab province on July 12, 2016 to demand justice for victims of sexual violence. Credit: IPS

This online outcry is important because it is giving voice to acts that are public, but that are silenced and neutralized by convention. It is a cruel privilege to be able to harass a girl or a woman with impunity, but in so many cases this is the norm.

What we are seeing currently, as women build and reinforce each other’s accounts, and as men join in to acknowledge their role, is a validation of the rightness of speaking out. We are seeing also the strength in numbers that comes from accumulated individual experiences that are characteristically undeclared.

As the crowd builds of those telling their story, we see a picture of real life begin to emerge. A critical mass is growing that proves how much goes wrong when people can act with impunity in a culture of silence.

The online wave joins the other mass movements collectively expressing women’s activism: the Latin American ‘ni una menos’ marches to protest violence against women and particularly against the least privileged; the women’s marches that took place across the world earlier this year in support of women’s rights and other freedoms; and the marches in Poland and Ireland against abortion bans.

The blanket of silence has also shielded perpetrators of assaults on LGBTI communities and others who are more vulnerable for reasons of ethnicity, poverty, or age. These women are the ones most affected, least visible and have the most to gain from the collective strength of voices building peer pressure and culture change.

After all, it was Tarana Burke, a New York community organizer serving young women of colour who originated ‘me too’, and her friend Alyssa Milano who picked it up and became the catalyst for the billions who have now been reached by its message.

The full and free participation of women in society, in politics, and in the workplace is essential for women’s voices to be heard and for their rights to be respected. The more women there are who take on senior representation roles across public and private sectors, the more opportunities there are for change in the culture of invisibility and impunity, where more powerful men are able to prey on women. Sexual and all other forms of harassment at work, home and outside the home are not acceptable and must not be ignored.

Casual indifference, and people saying “it’s nothing” have to stop. The number of men who have joined this campaign is promising but far from being enough (30 per cent in one report). It has already been too long that permissive blindness is the norm.

This is about both women and men changing their response to acts of sexual aggression and acting in solidarity to make it visible and unacceptable. Good men should not be quiet spectators.

We need to have all women empowered to speak, their rights and bodies respected, and behaviours established and entrenched as normal that let no one off the hook. No more impunity.

We salute the thousands of women who have been fighting against all violations of women’s and girls’ rights and call for renewed investment in the fight to end all violence against women.