The UN’s 16 Days of Activism against Gender-Based Violence Campaign, under the overarching theme “Leave No One Behind: End Violence against Women and Girls,” concludes December 10. 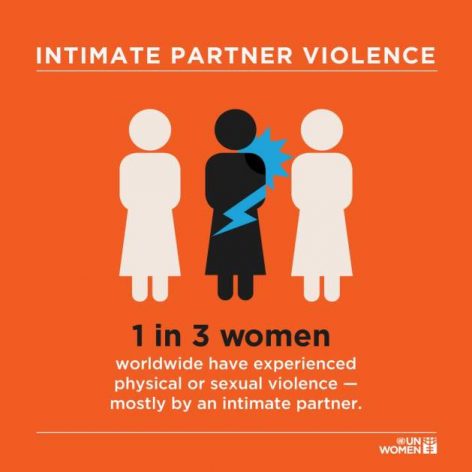 NEW YORK, Nov 29 2017 (IPS) - It’s the fifth day of the 16 days campaign on violence against women but I feel like the campaign started months ago because of the powerful #MeToo campaign. While I applaud this campaign, I have some thoughts that I believe could make this a truly global watershed moment in the fight against sexual and gender-based violence.

Expand the “clicktivism”– the use of social media and the Internet to advance social causes— to real life activism. The issue of sexual and gender-based violence (SGBV) needs to be addressed in multiple ways beyond hashtags. Women must be able to tell their stories beyond a few clicks on a computer or a smart phone.

There is nothing more cathartic for victims/survivors than to be able to share their stories in a safe environment with caring people who are ready to support them. This can help in breaking their feelings of isolation, guilt and shame and convey the message that they are not being judged and that help is available.

Creative approaches to story telling by victims of SGBV including through writing, use of theater techniques, poetry, dance and music must be supported and enhanced. This is where the convergence of real life activism and online activism would again prove helpful.

Online platforms allow for sharing of these creative approaches in working with victims/survivors of SGBV. They can inspire support groups to explore, replicate and modify such approaches that in turn can result into more diverse and more effective interventions.

The issue of sexual and gender-based violence (SGBV) needs to be addressed in multiple ways beyond hashtags. Women must be able to tell their stories beyond a few clicks on a computer or a smart phone.

Expanding and strengthening networks of SGBV support groups is another area where online activism can augment real life activism. Social media are an effective platform to reach out to the “unusual suspects” –i.e., those who describe themselves as not the “activist type.” This can result into very concrete actions including technical support as well as funding for SGBV prevention programs.

Protection of victims/survivors is paramount. Silence protects the perpetrator and imprisons the victim. As a feminist activist, I strongly believe this. However, I’m also aware that it is easy to utter these words especially when you are not the victim. Whether one is working online or in person or both, the protection of victims/survivors is critical.

Thus, all institutions and individuals in the intervention chain: the doctor who examines the victim and issues the medical certificate, the police officer who conducts the investigation, the journalist who reports about the crime, the judge who prosecutes the case, the psychologist who provides counseling services, the social worker who lends overall support to the victim/survivor must be highly qualified professionals. They all must play as part of a team whose singular mission is to establish the truth and seek justice for the victim.

Accountability in all places. There are numerous international instruments that have been adopted by the United Nations to combat SGBV. They include General Recommendation 12 adopted in 1989 by the Committee on the Elimination of Discrimination against Women (CEDAW). In 1990, General Recommendation 14 addressed female circumcision and other traditional practices harmful to the health of women.

In 1992, the Committee adopted General Recommendation 19, which defines gender-based violence to be violence that is directed against a woman because she is a woman or that affects women disproportionately. The 1993 UN General Assembly Declaration on the Elimination of Violence against Women outlines steps that governments and the UN, should take to address gender-based violence, and makes clear that governments should not invoke any custom, tradition, or religious consideration to avoid their obligations with respect to its elimination, and should exercise due diligence to prevent, investigate and, in accordance with national legislation, punish acts of violence against women, whether those acts are perpetrated by the State or by private persons.

There is also the groundbreaking UN Security Council Resolution 1325 and the supporting resolutions on Women and Peace and Security that aim to prevent the use of rape and other forms of sexual violence as a weapon of war. These international laws and policies are reinforced by regional and national legal mechanisms in various countries.

It is clear is that there is no shortage of laws and policies to combat sexual and gender-based violence. What is lacking is implementation. A strong civil society is crucial in holding the UN and governments accountable and call for effective implementation at all times.

However, I would like to emphasize that accountability should be demanded from everyone, from all places. While we hold public authorities accountable, we also need to hold families and communities accountable. Many SGBV crimes are committed in the private sphere.

Furthermore, it is also families and communities that demand victims/survivors to suffer in silence as they will bring dishonor if they speak out. When news about the crime goes out—particularly in cases of rape, the women are married off to their rapists or driven away if they refuse.

A lot more needs to be done in order to have a world free from violence for all women and girls. I have no doubt that linking clicktivism with real life activism; and broadening the outreach of real life activism by complementing it with digital activism could help create that world.