Keeping the Spotlight on Violence against Women and Girls

16 Days of Activism begins on 25 November, the International Day for the Elimination of Violence against Women, to 10 December, Human Rights Day. 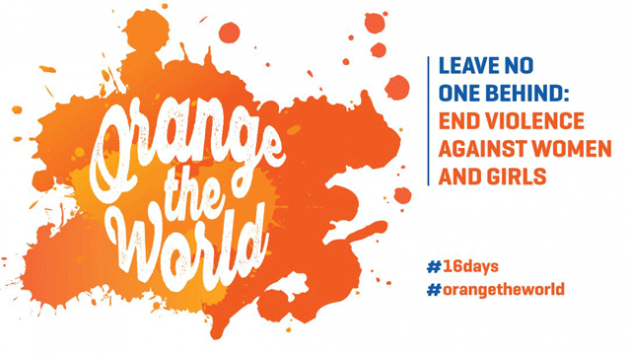 UNITED NATIONS, Nov 21 2017 (IPS) - As cases of sexual harassment and assault continue to come to light every day, a different campaign to end such violence wants to keep the spotlight shining.

The 16 Days of Activism against Gender-Based Violence, an annual campaign by UN Women, aims not only to end violence against women and girls, but also to leave no one behind.

More than one in three women have experienced violence in some form in their lifetime—that is equivalent to 700 million women, or close to the total population of sub-Saharan Africa. Cases of sexual violence have increasingly come to light among marginalized communities in conflict and humanitarian crises, from Mexico to Myanmar.

The campaign is beginning this year against the backdrop of a global outcry against the “global pandemic”.

Millions have rallied behind the #MeToo campaign, which aims to reveal the magnitude of sexual harassment and other forms of violence that women all over the world experience every day.

Though the original #MeToo movement was launched ten years ago by activist Tarana Burke, the more recent viral campaign has inspired many to come forward with their stories, including those who have exposed celebrities and public officials. IPS spoke with the Deputy Executive Director of UN Women and Assistant Secretary-General of the UN Lakshmi Puri about global gender-based violence and how to end it.

Q: Why did 16 Days of Activism begin? What is its significance and what does it entail this year?

The most important promise of Agenda 2030 and something that is so essential for sustainable development is leaving no one behind.

So this year’s theme of ending violence against women in the context of empowering and protecting women and girls that tend to be left most behind in terms of being most excluded or marginalized.

That means women who are migrants, refugees, or internally displaced and who, because of displacement, are more exposed to violence including sexual violence, exploitation, and trafficking.

Also, women living with disabilities—those women living, for example, in rural areas where they face communication barriers or various force of discrimination when accessing health or social services.

Q: What needs to be done to end such violence?

In the context of leaving no one behind and violence against women, data, statistics, and evidence of what is actually happening to them. Identifying the most marginalized girls is fundamental so that we are able to plan and implement policies and programs that reach them.

We need to understand the special vulnerabilities and how to empower them to resist violence, respond to violence, escape violence and be empowered in every way.

The second aspect is that we need to also address is prevention which means changing the whole culture and context of sexism and male patriarchy.

That is why men have to take responsibility, especially men with public influence taking a very strong stand. That is why we have the HeForShe movement and one of the major commitments for those that join is how they will model positive masculinity and principles of equality, rights, and respect in themselves and in others including their sons and those men and boys they come into contact with as well as holding peers accountable to non-discrimination.

So changing mindsets, changing gender stereotypes, and zero tolerance for violence against women is essential.

The issue is also identifying the different types of violence is very important because sometimes
we find that women and girls live with violence without actually recognizing it, whether it is sexual harassment at the workplace or psychological violence or economic violence.

We should recognize that no violence is acceptable, and all harmful practices need to be recognized.

Q: Is gender-based violence perpetrated by individuals or is it a larger institutional failure? Is everyone complicit in this culture?

Education is a very important aspect—education of both women, girls, men and boys and of institutions.

Institutions need to have their employees, clients, managers fully educated on this issue and aware about principles of equality, rights, and respect and zero tolerance for violence.

Then there is an issue of protection—in the context of what type of policing do you have, particularly when violence takes place in public spaces, and how do you respond as law enforcement when there is a domestic violence case. And in terms of the judiciary and legislature, what kind of laws are there to enforce protection.

Protection is an important part of how the state exercises its duty.

If you have the conviction of perpetrators, then people will know that these are the consequences. But otherwise the culture of impunity that we see then defeats the purpose of prevention and all the actions that we take.

All of this is even more needed in the context of the most marginalized and most lacking in these kinds of situations.

Q: In many conflicts around the world, sexual violence is often used as a weapon of war. What needs to be done to prevent these cases? Will raising the issue of sexual violence to the ICC help in the context of prevention?

Sexual violence in conflicts has now been recognized by the international community and by the Security Council as a war crime. ICC [International Criminal Court] also now recognizes this as one of the elements of a war crime.

What is needed is a policy of acting strongly against [sexual violence] as the UN but also holding perpetrators accountable and supporting victims and survivors.

Advocating with member states and governments and parties to the conflict because this violence is committed sometimes by state agents or sometimes non-state parties including in the context of violent extremism and terrorism.

We also recognize that sexual violence is a predictor of larger conflicts. It is one of those human rights violations that we insist must be seen as a warning of an impending major outbreak of conflict, and it has been proven that this is so.

Q: Sexual violence and harassment is in the spotlight now. How does 16 Days of Activism work alongside or even reinforces other ongoing campaigns right now like #MeToo?

It is really important that we keep the spotlight. And 16 Days of Activism is the high point of spotlighting.

But throughout the year, from the ground to up or top to down, the focus and awareness about this issue of violence against women is really important to highlight in everything that we do.

The revelations that are coming out, the #MeToo movement—all of this is part of what we call movement building.

There is a tendency to say “this happens, stuff happens”—but no, it cannot be seen as inevitable. It can be prevented. Women and girls can be protected. We can punish perpetrators.

It is something that needs to be supported as a society, community, private sector, governments—everyone must act.

It is important that movements are built up. Unless we have a people mobilization around the issue ending violence against women, we are not going to really achieve our objective.

We are very heartened by this reawakening.

Q: What is your message to the girls and women who have experienced some form of violence, whether or not they have spoken out? And to the people who may not have experienced such violence but don’t know how to act/go about addressing the issue?

To women and girls, know that it is wrong that anybody should violate your human rights in the way that violence seeks to do. Understanding that inherent right to be free from violence is the first point that all women and girls must understand. It is not inevitable or something to be accepted as part of the circumstances that they find themselves.

That’s one of the things we have been doing in refugee camps and in humanitarian situations, bringing this message that women are entitled to zero tolerance and freedom of violence in every circumstance.

Secondly, it is important to recognize when violence happens. Inform yourself as to what the forms of violence are whether it is sexual or otherwise.

Third, stand up to it. I know there may be situations where women and girls feel helpless and feel that they can’t stand up, but there are ways to circumvent that and really have the courage to stand up to it and take action.

For people who haven’t experienced violence, one of the things that is important to remember is you can never say that it doesn’t affect me—everything affects you.

Violence against women and girls is such a widespread and ever-present phenomenon that there is hardly a family that has not been affected by it.

And it is incumbent on women and men both, boys and girls, to call out when violence happens against women and girls in your neighborhood, in the street, park, schoolyard, college campuses.

Empathy and action, not apathy and inaction.

All those who have the duty to care must make special efforts to support women and girls in particularly vulnerable situations and circumstances.

Violence against women has no boundaries, and this must be recognized by all.