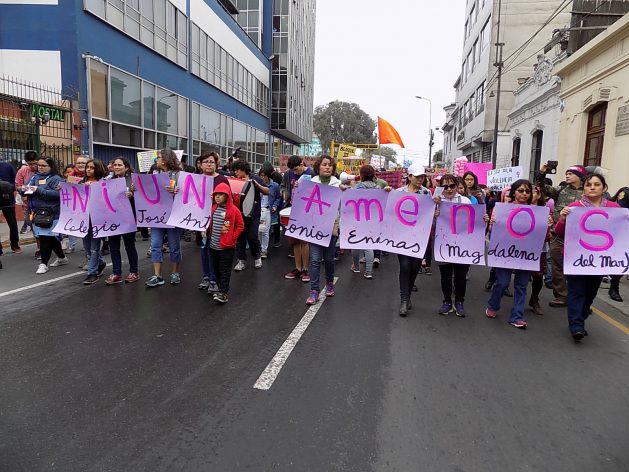 Peru ended 2017 with 116 victims of femicide and 223 women who survived this gender-based crime. Credit: Courtesy of Julia Vicuña

LIMA, Jan 15 2018 (IPS) - The political crisis triggered in Peru by the presidential pardon of former president Alberto Fujimori granted on Christmas Eve casts a shadow of doubt over what actions will be taken to curb violence against women in this country, where 116 femicides were registered in 2017, and which ranks eighth with respect to gender-related murders in Latin America and the Caribbean.

“The pardon devalues the actions that the government may undertake to achieve a life without violence, because it has released one of the worst violators of the human rights of women,” said Liz Meléndez, director of the non-governmental Flora Tristán Women’s Centre.

Meléndez pointed out that in the 1990s, Fujimori was responsible for a public policy that forcibly sterilised more than 200,000 Andean indigenous peasant women, a crime for which he will not be investigated or penalised since he was granted a presidential pardon.

“This impunity is outrageous,” she said, since due to problems of access to justice, poverty and discrimination, it was only possible to put together a file of 2,074 cases.

The distrust towards the government’s actions was accentuated by the official designation of 2018 as the year of Dialogue and Reconciliation, a phrase coined by current President Pedro Pablo Kuczynski to justify the pardon granted to the ex-convict, sentenced for corruption and human rights violations.

It rankled even more given that Decade of Equal Opportunities for Women and Men is beginning.

“The declaration of the Decade warns us that the gender focus will continue to be undermined, as happened throughout 2017, by the pressure of conservative groups, whose representatives are likely to be part of the next new cabinet; and we are worried that there may be setbacks in the fight against violence against women, despite the advances in legislation and regulations,” said Meléndez.

Peru is in fact, according to the United Nations Development Programme (UNDP) and UN Women, one of the countries in the region with laws, plans and public policies against gender violence, specific legislation against femicide (gender-related murders), and new laws such as the elimination of prison benefits for those sentenced for rape, passed in 2017. 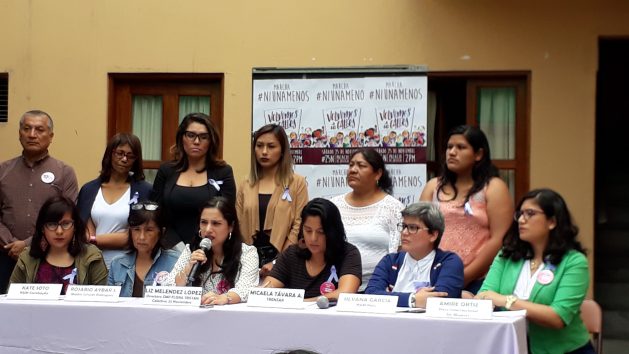 Conference given by women’s collectives in Peru on Nov. 25, 2017 in the Flora Tristán Centre to announce the march for the International Day for the Elimination of Violence against Women. The centre’s director Liz Meléndez is holding the microphone. Credit: Mariela Jara / IPS

According to statistics from the Ministry of Women and Vulnerable Populations (MIMP), between 2009 and 2017, there were 2,275 cases of gender-based violence: 991 femicides and 1,275 attempts. In this country there is an average of 10 murders of women for gender reasons per month.

The MIMP reported that last year ended with 116 victims of femicide and 223 women survivors of this kind of crime. The majority of cases, 79 percent, occurred in urban areas.

In almost 80 percent of the cases, the aggressors were men with an intimate relationship with the victims, 90.4 percent of whom were adult women.

This places Peru in eighth place in terms of femicide in the region, according to the Economic Commission for Latin America and the Caribbean (ECLAC), and in fourth place compared to the countries in the Southern Cone of South America.

In Peru, seven out of 10 women suffer physical, psychological or sexual abuse on a routine basis by their partners, according to the Demographic and Family Health Survey (ENDES 2016), despite the current legal and regulatory framework.

Precisely to call attention to the need to act more effectively in the face of this scourge, the Ombudsman’s Office, an autonomous government body, carried out a campaign in November and December to declare 2018 as the “Year of equality and non-violence against women.”

The proposal received broad support, the commissioner at the Office of the Deputy Ombudsman for Women’s Rights of that public body, Patricia Sarmiento, had told IPS before the government declared the Decade of Equal Opportunities for Women and Men. 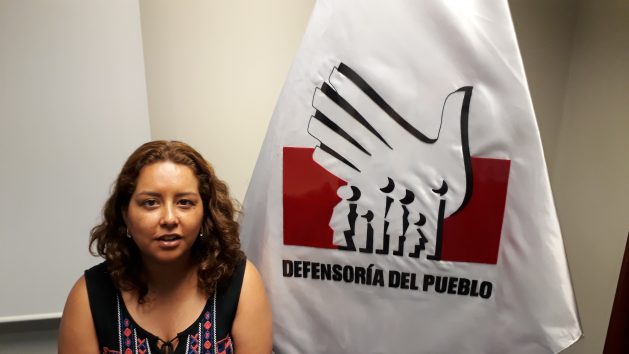 Commissioner at the Office of the Deputy Ombudsman for Women’s Rights of the Peruvian Ombudsman’s Office, Patricia Sarmiento. Credit: Mariela Jara / IPS

Sarmiento said her institution has contributed to preventing, punishing and eradicating violence against women and other members of the family carried out in the public or private sphere, under Law 30,364.

She was referring to the training of judges and police to eradicate the mistaken belief that they can apply a reconciliation mechanism in cases of violence against women committed by an intimate partner. “That is unacceptable,” she said.

“Unfortunately, this idea reaches the victims, so some believe that when they are insulted or pushed it is not an act of violence and can be subject to reconciliation, and that is what leads us to continue perpetuating this situation in the country,” Sarmiento added.

Another recommendation is to grant a budget allocation to the police for it to provide adequate protection measures for the victims. “The institution lacks sufficient logistics, staff and equipment, such as for example a georeferenced map to monitor the cases,” she said.

A 2015 report by the ombudsman’s office, based on the analysis of court records of cases of gender-based violence, reveals that in 30 percent of femicides, the victims had brought complaints against their aggressors for domestic violence.

“One of the cases was of a woman who had filed complaints four times and did not receive protection. That cannot keep happening,” said Sarmiento.

In February 2017, a similar case occurred in the central highlands region of Ayacucho, where lawyer Evelyn Corahua was murdered after reporting an attempted femicide, and requested protection measures.

“A sufficient budget is needed for proper enforcement of the law and for the implementation of policies to eradicate gender violence. Otherwise the law will only be dead letter,” Sarmiento warned.

Civil society organisations such as the Flora Tristán Centre are worried about the degree of political will that the new cabinet, named after Fujimori was granted his pardon, will have.

Melendez, the director of the organisation, said that in the face of the cruelty shown in cases of gender violence in 2017, the main challenge for this year must be to strengthen prevention.

“That would entail ensuring comprehensive sex education with a gender focus in the classroom, something that unfortunately with this government remains in question,” she said. “It is clear that the current crisis will impact the management of public policies and will affect the fight against violence against women.”

This view is shared by human rights activists and feminists through the social networks, as is the case of lawyer Patricia Carrillo, who participated in the marches against Fujimori’s pardon and in those promoted by women’s organisations for the right to live without violence. “They want to silence us but they will not succeed,” Carrillo said, in dialogue with IPS.

“Declaring the decade in this way, without taking into consideration what was proposed by the ombudsman’s office, undermines our demand for equality and non-discrimination based on gender,” she lamented. “We do not want equal opportunities in the same conditions of oppression as men, our space of struggle will continue on the streets,” she said.