African Migration to Europe, Not a Crisis but an Opportunity 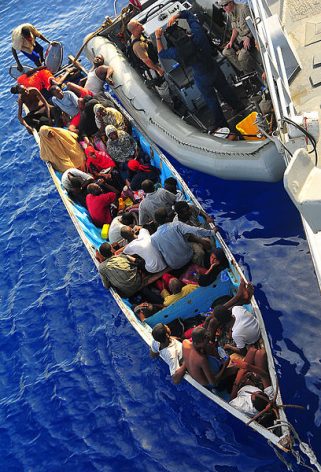 Somali migrants receiving assistance from US sailors. Credit: US navy

WASHINGTON DC, Feb 14 2018 (IPS) - An increasingly common justification for European development assistance to Africa is the notion that it will reduce migration from the South. While this sounds intuitive and makes for an appealing argument, the research shows that it is highly unlikely.

The combination of demographic and economic imbalances means that migration flows between Africa and Europe will almost certainly increase in the coming decades. By 2050, sub-Saharan Africa will have 800 million new work force participants.

This population boom will be full of young, energetic job seekers, and local markets will not be able to absorb and provide meaningful livelihood opportunities for all of them.

At the same time, Europe will continue aging, with labor demand exceeding supply in critical sectors such as nursing and healthcare. By 2050, more than 34 percent of Europe’s population is expected to be age 60 or older.

Alongside these demographic realities is the continuing imbalance in living standards. Even if African average per capita incomes were to double in each of the next three decades, by 2050 the income gap with Europe will still be large enough to make migration a promising alternative for many.

In addition to economics, many migrants will be driven by conflict or by the already-evident impact of climate change on their home countries. The bottom line is that over the next three decades, it is highly likely that tens of millions of new workers will come to Europe to run factories, provide healthcare and education, and deliver the services that make modern economies functional and comfortable for their residents.

The policy choice for Europe is not whether there will be large scale migration, but how to manage it in a way that is economically beneficial and socially sustainable. Three policy imperatives flow from these realities.

Migration can have immense mutual benefits if it is well-governed. Host country policies governing migrants’ access to labor markets and their ease of integration into local communities will determine how quickly these positive migration impacts can be realized. There are many good ideas—and examples—that can be scaled up.

Australia and Germany have successfully tested programs to train migrants in needed skills before they arrive, part of a model that CGD has proposed called Global Skill Partnerships. Engaging the private sector from the start is critical to ensuring that such models are sustainable, meet local needs, and maximize migrant contributions to economies.

Germany and Canada can provide valuable lessons on supporting the integration of migrants into host communities. Making migration work also requires explicitly and proactively addressing the needs of host communities.

When governments fail to step up help for schools and health facilities strained by additional demands, it only aggravates tensions and resentment that can spill over in ugly ways. Migrants almost always generate net positive economic benefits to the host country at large, but these benefits need to flow quickly and visibly to the local communities most directly impacted by migration.

Ultimately, the effect of migration is a policy decision, and policymakers need to implement legislation that allows robust migrant contributions to be realized, at the community level and beyond.

A vibrant, safe, and prosperous Africa is not just important to Europe but also to the world. And many countries in Africa are making admirable progress on economic and social development.

At the same time, the continent poses the central development challenge for the next generation—eradicating remaining extreme poverty; improving health and education outcomes; providing economic opportunities for the burgeoning young population; and dealing with conflicts, extremism, and failing states. Tackling these challenges will require leadership from the continent and sustained support from its partners.

For Europe, increasing support to economic and other development in Africa is imperative, not only as a neighbor, but also to equip Africa’s future workforce with the skills and education that will maximize their contributions at home and in Europe, should they choose to move.

That is why development engagement with Africa—through aid but equally through trade, investment, and other channels—remains an essential priority for European policymakers. But for this development assistance to be effective, it needs to focus on supporting broad-based development and not be distorted by ultimately futile programs linked to deterring migration.

There is some evidence that funding projects targeted to the supposed root causes of migration and tailoring development interventions too closely to those migration drivers may instead undermine development (and migration deterrence) “by neglecting the development needs of communities.”

Given demographic realities, large-scale migration will not significantly let up in the coming decades. In some circumstances, humanitarian or development assistance can relieve immediate pressures to leave a distressed environment, but deterrence efforts alone will not counter the multitude of factors driving these migrant flows.

Too narrow a focus on deterrence mechanisms also stacks the test of success for development assistance in a way that will come back to haunt us when we inevitably fail to meet it. Instead, states and international organizations must focus on partnerships and cooperation to shape how migrants will move and contribute.

Address the political discourse head-on and change the rhetoric around migration and development.

The politics around migration are as hard in Europe as they are everywhere. Dealing with the recent and rapid flows of refugees and migrants has brought out underlying tensions within societies and divisions among European states.

In this climate, it is expedient to focus on short-term goals rather than provoke a contentious debate about longer-term strategic choices. Expediency, however, can also become an excuse to postpone the necessary dialogue to prepare European societies for the choices they face and how best to manage them.

The future migration challenge Europe faces is an example of a so-called Gray Rhino—a highly probable, high-impact, yet neglected policy challenge. To neglect it may likely mean welcoming a cycle of migration “crises” reaching Europe’s borders for decades to come.

The responsibility for changing the discourse falls on more than political or public figures. In the development community, we also sometimes fall into the trap of referring to migration as a “problem” rather than acknowledging it as a potential opportunity.

With the right policies, migration offers huge improvements in human welfare, with significant contributions to host communities, migrants’ home communities, and migrants and their families. Let’s work together to put those policies in place so Europe and Africa will both be better for our children.