SEOUL, Feb 20 2018 - Ban Ki-moon, former Secretary General (SG) of the United Nations (UN) has been elected as President of the Assembly and Chair of the Council of the Global Green Growth Institute (GGGI) for a two-year term. He takes over from Gemedo Dalle, of the Federal Democratic Republic of Ethiopia. 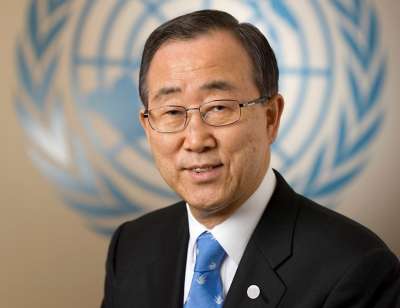 The appointment of Ban Ki-moon became effective on 20 February 2018 following the unanimous agreement by Members of the GGGI Assembly, the Institute’s supreme governing body.

Frank Rijsberman, Director-General of GGGI, praising Ban Ki-moon for his achievements during his tenure as UN SG stated “Under Mr. Ban’s leadership, governments of the world agreed on concrete goals and targets necessary for achieving a more sustainable and inclusive future. The Climate Change targets agreed under the Paris Agreement and the 17 Sustainable Development Goals are rightly recognized among the world’s greatest diplomatic successes. His vision and leadership will help GGGI deliver even greater impact in our mission supporting Member governments to achieve the ambitions set out under the SDGs and the Paris Agreement.”

As UN SG for two consecutive terms between 2007 and 2016, Ban Ki-moon worked relentlessly as a bridge builder, giving voice to the world’s poorest and most vulnerable, and moving the organization to be more transparent and effective. He worked closely with member states of the UN to shape the 2030 Agenda for Sustainable Development and also to establish UN Women, thereby advancing the UN’s work for gender equality and women’s empowerment. Ban Ki-moon also undertook major steps to strengthen UN peace operations, to protect human rights, improve humanitarian response, prevent violent extremism and revitalize the disarmament agenda.

“I’m delighted to have been elected as the new President of the Assembly and Chair of the Council of GGGI and am willing to contribute to promoting green growth and sustainable development around the world. I will also try my best to fulfil the expectations of the international community in this regard,” said Ban Ki-moon after his election.

Prior to the time as UN SG, Ban Ki-moon was Minister of Foreign Affairs and Trade of the Republic of Korea. His 37 years with the Ministry included postings in New Delhi, Washington D.C., and Vienna. He was responsible for varied portfolios, including Foreign Policy Adviser to the President, Chief National Security Adviser to the President, Vice Minister, Deputy Minister for Policy Planning and Director-General for American Affairs.

As part of the role as President of the Assembly and Chair of the Council, Ban Ki-moon will chair the 11th Council and Assembly meeting of GGGI during the fourth quarter of 2018.