A Crisis Deepens in Libya but Where Are the Cameras? 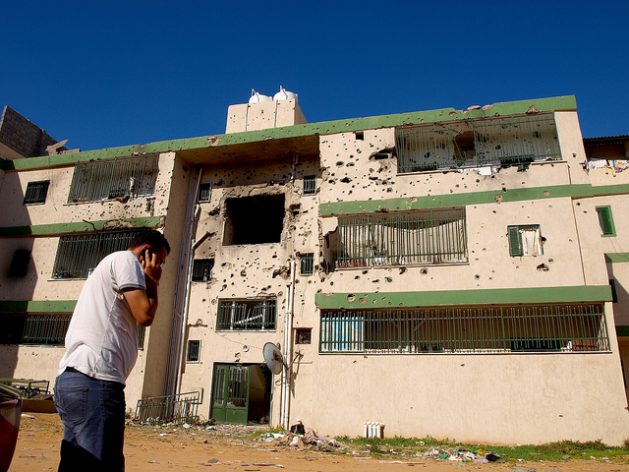 UNITED NATIONS, Feb 16 2018 (IPS) - Perhaps no major political or humanitarian disaster is as overlooked as the ongoing crisis in Libya. For example, although the New York Times in September 2017 published a total of seven articles mentioning Libya, only one of them touched on the violence ripping it apart. Even the Times’ gesture merely highlighted the latest permutation of the US government’s foreign military decisions.

The article, by Eric Schmitt, cited the Pentagon’s Africa Command and stated that the United States military had carried out a half-dozen “precision strikes” on an Islamic State training camp in Libya, killing 17 militants in the first American air strike in “the strife-torn North African nation” since Donald Trump was inaugurated as president.

Two of the Times’s September 2017 articles on Libya are about the Trump administration’s travel ban, which affects Libyans, among others. One is about Libyans seeking asylum in Germany only to find “hatred,” and the other is about the threats, including racism and violence, that sub-Saharan African migrants using Libya as a route to Europe face in that country.

Contrast the current media coverage of Libya with that of the period just before the NATO military action that led to the squalid death of Libyan president Muammar Gaddafi. In February 2011 alone—a month before the US, Britain and France began bombing that country to oust Gaddafi—the New York Times carried well over a hundred articles on Libya. One editorial, on 24 February 2011, confidently asserted that “unless some way is found to stop him, Gaddafi will slaughter hundreds or even thousands of his own people in his desperation to hang on to power.”

However, months after the dictator’s enemies, aided by Western powers, had overrun the country, the same paper ran a telling story by veteran correspondent Rod Nordland entitled “Libya Counts More Martyrs than Bodies.” “Where are the dead?” he asked, referring to the mass killings that Gaddafi had been accused of planning. No evidence of such killings was to be found anywhere in the country.

The “impression of a now well-rooted political economy of predation is palpable, as if the country were fueling its own crisis with its own resources to the benefit of the few and the frustration of the many.”

Ghassan Salamé, special representative of the secretary-general and head of the United Nations Support Mission in Libya
Here’s what is currently happening in Libya, which is unlikely to be covered in corporate media.

On 28 August 2017, Ghassan Salamé, the special representative of the secretary-general and head of the United Nations Support Mission in Libya, told the Security Council that on his first night in the capital, Tripoli, after taking the job, “I fell asleep to the protracted staccato of gunfire.” Civilians, he said, “are killed or injured across Libya as a result of sporadic armed clashes… Thousands are also detained for prolonged periods of time, many with no prospects of a fair trial.”

Libya’s current state is one of near anarchy. A UN-led initiative resulted in a Libyan Political Agreement in December 2015 and a so-called Government of National Accord (GNA), bringing together two warring “governments,” the Council of Deputies (elected in 2014) and the Islamist General National Congress (GNC).

The GNA is backed by the UN and is internationally recognised. Its authority, however, is both unclear and limited; the country’s capital, Tripoli, the haven of the GNC, is still contested and riven by violence.

The components of the GNA still compete for authority, legitimacy and control over state resources and infrastructure. In effect, there are still two competing, even warring, governments in the country, and there is no leader commanding anything approaching national clout, let alone support or legitimacy.

Oil production in Libya reached 1 million barrels a day in early October 2017, far below the 1.6 million it produced before the crisis. Salamé said that the “impression of a now well-rooted political economy of predation is palpable, as if the country were fueling its own crisis with its own resources to the benefit of the few and the frustration of the many.”

When a convoy of UN personnel was attacked with gunfire and rocket-propelled grenades on 28 June 2017 by militant groups in the country, Salamé reported that the active “presence of ISIS, Al Qaida–affiliated terrorist groups, foreign fighters and mercenaries, the trafficking of arms and the cross-border black market economy are challenges which extend across Libya’s borders and impact its neighbours and the wider international community.” Yet this was not a major news item in mainstream US media.

In June, UN investigators reported that terrorists, militants, mercenaries, and partisans have been targeting the two “governments” in the country, as well as residential areas, with improvised explosive devices, causing the death and injury of many civilians. The investigators reported summary executions of civilians, mass killings and bodies found with “bullet wounds and signs of torture.”

Kidnappings are routine, and so is the “arbitrary detention and torture of journalists and activists involving Haytham al-Tajuri, the commander of the Tripoli Revolutionaries Brigade. Armed groups affiliated with the National Salvation Government were involved in several cases of kidnapping and torture,” the investigators stated in their report.

Thousands have perished in the near-anarchic violence that these multiple groups and their foreign backers perpetuate, and an estimated 435,000 of Libya’s population of just over six million are internally displaced.

September ended with the report of the killing of 26 people and the wounding of 170 by rival armed groups in the city of Sabratha after two weeks of fighting.

In October, CNN reported slave trading in Libya, with a footage of black Africans being auctioned for around $400 each. The footage caused the African Union (AU) chairman, president Alpha Conde of Guinea, to demand prosecutions for crimes against humanity. He condemned the resurgence of a “despicable” trade “from another era.”

So why isn’t the world focused on Libya following the humanitarian catastrophe it has become since Gaddafi’s death? Last year the United Nations high commissioner for human rights estimated that more than 9,000 people were detained without trial in the country.

Sectarian killings are now commonplace, black migrants are brutalised and in some cases summarily executed by militia groups, and last year a report by the United Nations high commissioner for human rights estimated that more than nine thousand people were being detained without trial in facilities operated by the Ministry of Justice and the Department for Combating Illegal Migration of the Ministry of the Interior. It is now clear that those who ousted Mr. Gaddafi wanted a regime change but were unprepared for its consequences.

The latest Security Council resolution on Libya, adopted on 14 September, made a point of reiterating support for the GNA “as the sole legitimate government of Libya, with Prime Minister Fayez al-Sarraj as the leader of the Presidency Council.”

The resolution also expressed the Security Council’s “strong commitment to the sovereignty, independence, territorial integrity and national unity of Libya,” a country that, before its so-called revolution in 2011, was one of Africa’s most influential states, a prime actor in the transformation of the Organisation of African Unity into the AU.

Writing in the March/April issue of the journal Foreign Affairs, Ivo Daalder, then the US’s permanent representative to NATO, and James Stavridis, then supreme allied commander Europe, described NATO’s operation in Libya as “a model intervention” that “succeeded in protecting…civilians” from an impending genocide. In fact, it provides a cautionary tale for trigger-happy humanitarians and those the British journalist Simon Jenkins once called “sofa strategists and beltway bombardiers.”

Libya’s ongoing problems raise questions about the role of the AU, of which Libya was once a prominent member. At the height of NATO’s bombing of Libya, in July 2011, Mauritania’s foreign minister Hamady Ould Hamady briefed the UN Security Council on the AU’s position.

Hamady spoke about the “indescribable suffering of the Libyan population” and then described the AU’s road map to peace: “the immediate cessation of all hostilities; the cooperation of the relevant Libyan authorities in facilitating the effective delivery of humanitarian aid to populations in need; the protection of foreigners, including African migrant workers living in Libya; and the adoption and implementation of the political reforms necessary to eliminate the causes of the current conflict.” The AU road map was routinely shelved as a Security Council document.

The AU could make greater efforts to resolve Libya’s crises. Its Peace and Security Department, which spearheads its efforts to promote peace, security and stability in Africa, is headed by Commissioner Smaïl Chergui from Algeria, a country that in the past played a prominent role in regional mediation efforts.

The current regimes in Libya may not have the same sentimental or rhetorical attachment to the AU that Gaddafi had, but experts believe that the regional body is still uniquely placed, despite the minimal interest displayed in Libya by major powers, to be more actively involved in containing the crises, whose impact has been seen in many of the neighbouring countries of the Sahel and even West Africa.