Guest Workers Prop Up the Economy of Home Country

Guest workers across the world send home money worth three times as much as global aid. For the Tamang family living in a shack in a Nepalese village, a job abroad can fund a new home and education for their son. 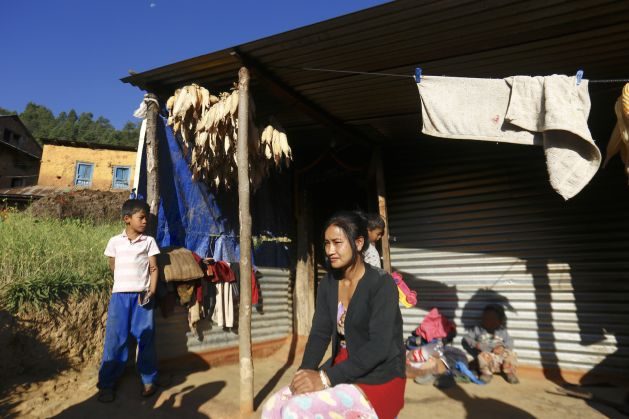 RAYALA, Nepal, Mar 12 2018 (IPS) - NEPAL. A few chickens are running around the courtyard in front of the corrugated iron shack. The village has just awoken. A bus passes by below on the road that snakes around the mountain; it will be hours before another one passes.

The small village of Rayala is three hours south-west of Nepal’s capital Kathmandu by car.

Close to three years have passed since the earth shook and buildings collapsed.

A day in Priya Tamang’s life

”I get up between 4 and 5 every morning. When I wake up, I first take care of my animals, a cow and a buffalo. I muck out their ´pen´ and feed them grass.

Just after 8am, I go home to make breakfast and eat with my son before he goes to school. Then I go out into the forest to collect wood and food for the animals. About 3-4pm I go home and start cooking for my son.

In the evening, I usually watch TV. I love Indian soap operas. I go to bed about 9pm.”
Seismologists described the event as a collision between the Indian and Asian continental slabs. The result of the series of earthquakes that hit Nepal during the spring of 2015 was devastating. Almost 3 000 people were killed, tens of thousands injured.

Priya Tamang is seated on a small stool (muda) in the sun outside the corrugated iron shack that has been the family’s home since the earthquake. A bit further up the hill, she has a cow and a buffalo, the milk from which she sells.

– I also make liquor. I sell it at the market, she says.

The family is still fighting to rebuild their home after it was destroyed in the earthquake. Priya Tamang manages to earn the equivalent of $110 a month, half of which goes to food and other expenses. She puts away the remaining $50.

But it wouldn’t have been possible to save enough money if her husband Gagan Tamang had not left to work in Saudi Arabia.

Inside the shack, their 9-year-old son Prajwal plays with the neighbour children. They are popping balloons and walking in and out of the shack.

Many villagers are in the same situation. And not just in this village. Working abroad to send money home is a global phenomenon called remittance that accounts for enormous sums.

COUNTRIES MOST DEPENDENT ON REMITTANCE: % of GDP

One billion people – or one in seven people across the globe – are dependent on the money being sent home by 200 million guest workers. Remittance allows people to rebuild their homes, give their children an education and pay for healthcare. At the same time, families are broken up when workers leave for international jobs and the economies of entire countries can become dependent on its foreign workers. The countries most dependent on the incomes of guest workers are:

* percentage of GDP for countries with more than one million citizens. In absolute terms, the largest amounts of money go to India, China, The Philippines, Mexico and Pakistan.
Worldwide, remittance projected to reach $596 billion in 2017. More than $450 billion dollars are sent by guest workers to middle- and low-income countries throughout the world.

That’s close to three times as much as the world’s entire aid budget, and just under Sweden’s entire GDP.

– The money sent home by guest workers has a significant impact on the economies of many countries, says Lisa Åkesson at the School of Global Studies at Gothenburg University, Sweden.

She has researched remittance and says money sent home by guest workers abroad can be especially important in regions of conflict. Organising aid can take a long time and in some areas, such as in Syria, the conflicts can be so serious that inhabitants can only be reached by limited efforts.

Money from workers abroad can arrive more quickly but only reaches individual families, as opposed to targeted aid efforts to relieve hardship or build democratic institutions.

The trend is that the amount of money sent home by guest workers is increasing. That is mainly due to the increase in global migration.

Today, there are 250 million migrants across the world. Most have moved countries to pursue a better job and income.

As such, the amount of money being sent home by workers grows in line with migration.

That also means many others have been able to make money off the guest workers.

The World Bank states that the average fee for transferring money internationally is 7.2 per cent, well above the global target of a 3 per cent transfer fee.