SYDNEY & KUALA LUMPUR, Apr 30 2018 (IPS) - After largely failing to provide 0.7 per cent of their Gross National Income (GNI) in aid to developing countries for almost half a century since making the commitment, donor countries have recently promoted blended finance (BF) as a solution to the financing for development challenge. Blending refers to combining public development funds (in the form of grants, technical assistance or interest indemnification) with loans from private lenders. 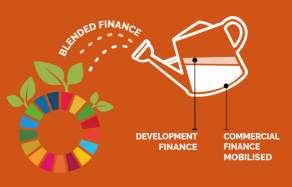 Potential and progress
The OECD and WEF launched the multi-year ReDesigning Development Finance Initiative (RDFI) in 2013 to promote public-private cooperation for sustainable development. The RDFI defines BF as “the strategic use of development finance and philanthropic funds to mobilize private capital flows to emerging and frontier markets”.

The RDFI promoted BF at the Third International Conference on Financing for Development (FfD3) in Addis Ababa in July 2015. A BF pioneer claimed BF had been effective in targeted development interventions and would complement traditional overseas development aid (ODA) such as grants.

The European Council endorsed BF as a tool of development cooperation in 2014, with other donors following suit. Multilateral development banks (MDBs) have enthusiastically embraced BF, issuing From Billions to Trillions: Transforming Development Finance, which claimed that it ensures “the best possible use of each grant dollar”. The Canadian minister of international development echoed this in Turning billions into trillions: The power of blended finance.

In a 2017 report, the OECD argued that BF can help bridge the US$2.5 trillion annual investment gap for SDGs in developing countries. The European Union (EU), the single largest promoter of BF, has made the European Fund for Sustainable Development key to its External Investment Plan (EIP) to address investment gaps in 18 countries of Southeastern Europe, Central and West Asia, and Africa, with a budget of €2.6 billion and guarantees of €1.5 billion.

According to the 2018 Inter-Agency Task Force (IATF) report on Financing for Development, 17 of 23 DAC members are engaged in BF, often through intermediaries such as development banks and finance institutions. It also noted that 167 new blended finance facilities, with approximately US$31 billion in commitments, and 189 blended finance funds were launched during 2000-2016.

A 2016 OECD survey found US$81.1 billion from the private sector mobilized through five instruments (guarantees, syndicated loans, credit lines, direct investments in companies, and shares in collective investment vehicles) during 2012-2015.

What’s the catch?
The IATF Report noted the lack of a universally agreed definition of BF, while a 2017 OXFAM-EURODAD report listed six different definitions. All accept ODA (e.g., grants), but other non-ODA official finance (e.g., export credit) are also included. Confusingly, terms such as ‘leveraging’, ‘mobilizing’ and ‘catalyzing’ are used interchangeably.

Thus, monitoring BF’s actual magnitude and development impact is difficult. BF often lacks transparency and accountability, with insufficient information made public. Noting the confusion, OXFAM-EURODAD argued that BF can be problematic: it is not necessarily pro-poor and mainly serves middle-income countries.

Like others, they also found donor country private corporations favoured, as with tied aid. When relying on external private finance, BF often crowded out host country financial sectors. Furthermore, BF projects may not be aligned with national plans, and usually do not involve stakeholder participation, undermining country ownership. An evaluation of the EU’s EIP found no reliable evidence of BF mechanisms actually aligned with and contributing to development objectives.

Worsening inequality
The IATF found BF has largely bypassed LDCs so far. ¬In 2016, the MDBs mobilized US$49.9 billion in private co-financing, with only US$1 billion going to LDCs, where infrastructure gaps are greatest. An OECD survey found that only 7 per cent of private finance was for projects in LDCs. According to the 2017 OECD report, between 2012 and 2015, most private financing mobilized by ODA was for middle income countries, with little trickling to LDCs. It also noted that private capital was greatest for finance and energy.

The IATF also observed that BF tends to target investment areas where the business case is clearer—such as energy, growth, infrastructure, climate action and, to a lesser extent, water and sanitation. BF is much smaller for areas such as ecosystems, reflecting such investments’ strong ‘public good’ character, with public finance generally more effective.

OXFAM-EURODAD noted that by pooling public resources and using ODA to subsidize private companies usually owned and domiciled in OECD countries, BF diverts aid from social programmes and essential services. Clearly, private finance is not guided by the same interests and principles as public finance, and cannot be presumed to serve the public interest.

Labelling BF a ‘honey trap’, The Economist noted, “Private investors do not typically fund the construction of rural roads in Africa, say, or vaccination drives in villages, even though the returns on such investments are often enormous. That is because the returns are either hard to monetize, or the risks are too great for the private sector to tolerate.”

It is unclear how public development funds, channelled through risky commercial financial services, will effectively mobilize private resources for sustainable development. There is no evidence that current BF practices are achieving development outcomes that would not have happened otherwise. After all, existing BF mechanisms do not safeguard the public interest and achieve development objectives.

Caution is needed as the development community ascertains the pros and cons of using public money to ‘leverage’ private finance. First steps would include a universally acceptable BF definition and a monitoring framework to ascertain the additionality of alternative BF mechanisms for both finance and development impacts.

Additionally, BF should respond to recipient country’s development strategies in the spirit of the 2015 Addis Ababa FfD Action Agenda which recognizes its potential while urging caution.