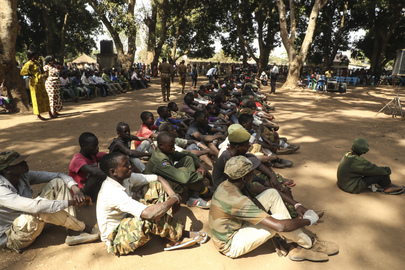 UNITED NATIONS, Apr 20 2018 (IPS) - More than 200 child soldiers were released by armed groups in war-torn South Sudan, and help will be needed to ensure their safe and bright future, according to a UN agency.

Both releases are part of a series, supported by the UN’s children’s agency (UNICEF), that will see 1,000 children freed from armed groups.

“No child should ever have to pick up a weapon and fight” said Mahimbo Mdoe, UNICEF’s Representative in South Sudan.

“For every child released, today marks the start of a new life. UNICEF is proud to support these children as they return to their families and start to build a brighter future,” he said.

Laying Down of the Guns

During a ceremony, known as the ‘laying down of the guns,’ the released children were formally disarmed and given civilian clothes.

The 112 boys and 95 girls that were disarmed were from the South Sudan National Liberation Movement and the Sudan People’s Liberation Army.

“UNICEF, UNMISS and government partners have negotiated tirelessly with parties to the conflict so as to enable this release of children. But the work does not stop here.” Mdoe said.

“The reintegration process is a delicate one and we must now ensure the children have all the support they need to make a success of their lives.”

UNCIEF says that the priority will now be medical screenings, counseling and psychosocial services.

Recent research from Child Soldiers International, a rights group that aims to stop and end all child recruitment, illuminated some of the horrific realities that children face when they fall in with armed groups.

The report, based on interviews with ex-child soldiers, detailed everything form forced murders, spying on neighbors and family members, denial of education and healthcare to forced cannibalism.

For girls, the trauma can be even deeper. It was found that a majority suffered sexual abuse and violence. Rapes, forced marriages and pregnancy are all common for girls caught in armed groups.

Such experiences for girls, CSI reported, are compounded when they return home, as many are ostracized by their families and labelled ‘prostitutes’ by their communities.

“Every effort will be made to ensure the correct psychological services. There will be immense trauma to overcome.” Mdoe said.

Families will also need support in order to facilitate reintegration.

The children involved in this release will also have access to vocational training as well as age-specific education services in schools and accelerated learning centers.

Their families will also be provided with three months’ worth of food assistance to support reintegration.

The South Sudanese Government has committed to halt child recruitment by armed groups in the country.

Child recruitment ‘far from over’ in South Sudan

Yet despite their commitment and the U.N’s tally of releasing 2,000 children in the country, advocacy groups say that some 19,000 children remain caught in South Sudan’s armed forces and groups.

As peace talks resume, the UNICEF has called on all parties to the conflict to end the use of children and to release all children in their ranks.

But with conflict lingering into its sixth year in the world’s youngest nation, the risk that children will be used in fighting remains.