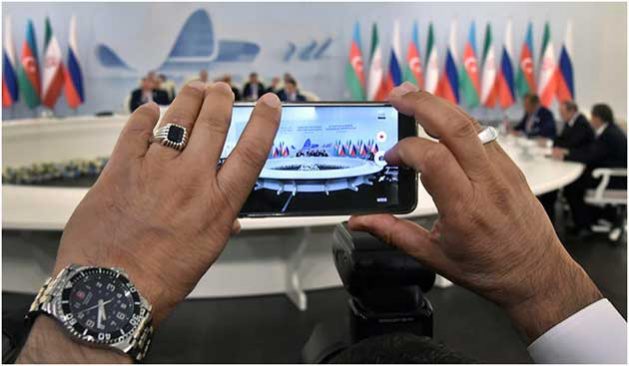 A cell phone takes photos of an August 2016 meeting in Baku between the presidents of Russia, Iran, and Azerbaijan. President Ilham Aliyev claims internet is 'free of censorship' in Azerbaijan, but authorities have blocked access to critical news websites. (Alexander Nemenov/Pool/AP)

NEW YORK, Apr 10 2018 (IPS) - President Ilham Aliyev claims that in Azerbaijan the internet is free and press freedom is guaranteed. But ahead of the April 11 snap elections, authorities have systematically silenced critical voices online through amending laws and blocking news websites, and hackers have attacked independent news outlets.

In a speech at the World Economic Forum in Davos this year, Aliyev said that about 80 percent of the country’s population were online, adding, “When internet is free, without any censorship and absolute majority of population are using internet, it is difficult to talk about restriction of press.”

However, Azerbaijanis waiting to learn the election results–hopefully after they cast ballots, not before, as happened in 2013 –have been cut off from independent or critical coverage of Aliyev and his family.

In March last year, Azerbaijan’s parliament passed amendments to the law on Information, Informatisation, and Protection of Information to allow authorities to shutdown websites without a court ruling, according to reports.

And in May the Ministry of Transport, Communications and High Technology blocked access to the websites of the RFE/RL Azeri-language service locally known as Azadliq, Berlin-based independent online news agency Meydan TV, independent daily newspaper Azadliq, and the online broadcasters Turan TV and Azerbaycan Saati (Azerbaijan Hour), CPJ reported at the time.

In a statement, RFE/RL said that the move to block its Azeri website came after it published investigative reports about financial activities allegedly linked to members of President Aliyev’s family and inner circle. The outlet tried to fight the ban, but in December a Baku court of appeals upheld the decision and all the websites remain blocked, according to reports.

Authorities also ordered access to the website of the Organized Crime and Corruption Reporting Project (OCCRP) to be blocked in September after the Sarajevo-based organization published “The Azerbaijan Laundromat,” which implicated the government in various money laundering and lobbying schemes, according to a Freedom House report.

When contacted by CPJ for comment about conditions for the press, Mushfig Aleskerli, deputy chairman of Azerbaijan’s Press Council, asked for questions to be sent via email, but as of April 9 the media authority has not responded to the emailed questions.

Social media accounts of critics have also been targeted by hackers and legal complaints, which many Azeri journalists say they believe are part of a government effort to silence them.

When the Facebook account of the award-winning outlet Meydan TV was hacked on January 29, it lost 100,000–nearly one-fifth–of the subscribers to its Azeri, English and Russian-language pages, and all content posted since 2012 was deleted.

Staff at Meydan TV told CPJ at the time that it was devastating to lose the followers that they worked so hard for. According to the outlet’s 2017 annual report, every third Facebook user from Azerbaijan was a Meydan TV follower. Facebook was finally able to restore Meydan’s 100,000 followers in late March, but the deleted content has not been restored.

In late December, YouTube removed four Meydan TV videos that allegedly infringed YouTube’s copyright rules, after Muse Networks, a company based in Turkey and with an office in Baku, filed a complaint, according to Meydan TV director Emin Milli.

Milli told CPJ at the time that the videos contained video and audio clips either produced or owned by Meydan. The videos included allegations of official corruption, police brutality, and reports on the financial dealing of President Aliyev and his family, and the state oil company.

Muse Network blamed a technical error for copyright strikes, apologized, and the videos were restored, Milli said, adding, “I have no doubts the Azerbaijani government is behind this.”

Azadliq, RFE/RL’s Azeri-language service, had six videos removed from YouTube in early January, also after Muse Networks flagged alleged copyright violations. Azadliq is a leading news channel in Azerbaijan with over 100,000 subscribers and more than 40 million annual views, according to RFE/RL. Azadliq’s director Ilkin Mammadov told the independent site Coda Story the videos were restored after Azadliq complained to YouTube.

Azerbaijani journalists have also reported an increase in trolling and digital denial of service (DDoS) attacks.

“Not only has there been more trolling recently, but the comments the trolls leave [on social media accounts] repeat and duplicate each other. That means they are centralized and managed by the government,” Raufoglu said.

Investigative reporter Khadija Ismayilova told regional news website Kavkazsky Uzel she believed bots as well as “employees of state institutions or journalists of pro-government media,” are behind the trolling, adding, “[they] are obliged to write comments under the posts of critics of power.”

In the same article, Ogtay Gulaliyev, head of the advocacy group Azerbaijan without Political Prisoners, said attacks from trolls increase when he posts something critical about the president’s assistant for public and political affairs, Ali Hasanov.

Sevinc Osmanqizi, who contributes to Meydan TV, has also alleged that Hasanov is linked to internet trolls. She circulated a letter that she wrote to Hasanov on April 8, in which she called on the presidential assistant to order “his trolls” to cease attacking her Facebook and YouTube pages.

Hasanov denied being connected to any online attacks. “I unequivocally declare that the accusations and the slander that I instructed troll or some fictional groups to insult certain individuals are clearly defamatory and target the government of Azerbaijan and me personally,” Hasanov said in a statement distributed through pro-government media.

In response to Hasanov’s statement, Richard Kauzlarich, a former U.S. Ambassador to Azerbaijan who has been labeled a spy and a “staff critic” after raising the country’s poor press freedom record, tweeted, “Oh but you did organize slander against me personally five years ago–using false news in government-controlled media.”

Turan contributor Raufoglu told CPJ that the attacks by trolls and bots are “just one, albeit conspicuous, element of the Azerbaijani regime’s ‘arsenal’ to fight freedom of speech.”

*Gulnoza Said is a journalist and communications professional with over 15 years of experience in New York, Prague, Bratislava, and Tashkent. She has covered issues including politics, media, religion, and human rights with a focus on Central Asia, Russia, and Turkey.