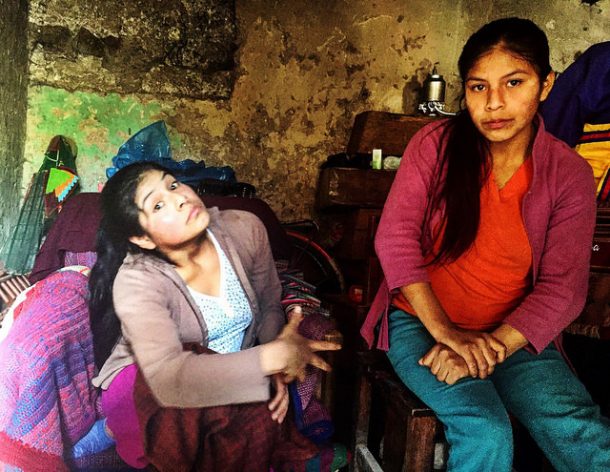 LIMA, May 30 2018 (IPS) - Eighty percent of the world’s disabled live in developing nations, according to a report by the United Nations. Their identities, lives and stories are of course varied – but what isn’t is the stigma and lack of resources they face.

If one were to take a ride up a dirt road high in the Andes Mountains, one would find Roberto sitting propped up against the wall of a barn on the side of that road, watching the occasional truck whizz by. Roberto, who is in his mid-twenties, spends his mornings and afternoons sitting.

Roberto is disabled with cerebral palsy, and as for many people in the Cajamarca region of Peru, no one can exactly say with what else. He is lucky that his mother has sought care for his motor, verbal and mental skills, in hopes that one day Roberto will be able to sit up, walk and talk on his own. But for most in Cajamarca who are born with physical and mental disabilities, they are either left to wither untreated or to seek help only to find that none exists.

Gladis was one of the lucky ones. The ninth of eleven children, she was born and set to grow up in Cajamarca, until a shot received at three months old hit a crucial nerve and rendered her legs paralyzed. Her family was able to send her to San Juan de Dios Hospital in Lima, sixteen hours away by bus, where she lived until she was eleven. During that time, Gladis received multiple operations, rehabilitative treatment, and education. With the help of a metal support, she took her first steps at eleven years old.

“I was able to feel like I was a person,” Gladis said in Spanish, “that I was of value, because I could walk.”

Once she returned to Cajamarca, Gladis completed her secondary studies and went on to get a degree in accounting. But once she attempted to enter the workforce, she found that even though she had recovered from her childhood paralysis and was able to walk, there was no place for her there. Once she did find a job, she was never paid.

For others who don’t have access to the resources she did, life is, as Gladis understated it, “Very sad.”

“Very sad. Very sad, because often the parents don’t support the children. They put them in a corner and tell them, ‘You don’t do anything, you don’t serve us, you don’t work – you are nothing.’ They don’t receive education or jobs.”

“I’ve arrived at some places where the child is thrown to the side and all he has is a bowl of oatmeal next to him. One child could not move his arms or his legs, and when I visited him I found him thrown on the ground with his head in the bowl like an animal … His parents said that this child was a punishment from God. They abandoned him, and didn’t give him food, and the boy died.”

Stigma is one obstacle in overcoming disability. But even in instances when parents do try to support their children, “the question is where? How can I do this?”

“Last week, I went to visit two girls. Their mother left their land to find attention and treatment for her daughters when they got sick, but economically she is not doing well. She’s out of a job, and rehabilitation costs money.”

The two girls Gladis described live in a house in the city Cajamarca, below the mountain Roberto resides on.

Entering into their house, it takes a minute to adjust one’s eyes to the dark. Once one does, made visible is a tiny, cramped space with only the dirt ground as a floor, one of two rooms that comprise the girls’ home.

It is in the second, in the very back corner, surrounded by chickens, hay and clutter, that Carmen Rosa sits. Covered by shadows, she is slumped in the chair that is her vantage point of life, jerking her torso and arms ceaselessly and uncontrollably. She lives, quite literally, shrouded in darkness.

Hers was an alarming image, as her eyes followed her visitors with a stillness that contradicted her physicality. Her gaze didn’t once stray as her arms swung out and struck the walls with a large bough she clutched in one hand, while her torso twisted to the right as her legs wrenched to the left and her entire being formed a sort of contorted, ever-moving Z. But beneath Carmen Rosa’s loss of control over her muscles, her mind remains as sharp as ever.

While she speaks, struggling to maintain her jerking body, Carmen Rosa breathes heavily from exertion. Her younger sister, Maria Elena, sways slightly as she watches from her spot standing in a separate corner of the room.

Carmen Rosa is 23 years old. She was born with a body that functioned completely normally, but once she turned nine she began to lose control of her muscles, one by one, until she came to her current state. Her mother left the land that their family had always lived on to take the family to Cajamarca.

Maria Elena is 15 years old. She watches her older sister jerk and flail, no longer with fear, but with a stoic resignation. After spending the years leading up to her ninth birthday in fear of discovering that she would begin to lose control of her muscles like her sister, Maria Elena turned nine, and her hands began to shake. She now rocks back and forth in a subtle precursor to her sister’s violent jerking.

According to the Peruvian National Confederation of People with Disabilities, special education for those with milder disabilities isn’t truly inclusive, and completely nonexistent for those with severe disabilities. Besides those few in special schools, 87.1% of school-aged children and teenagers with disabilities in Peru aren’t receiving any sort of education at all.

At one of the only special needs schools in the Cajamarca region, children are contained in classrooms while they scream, shout and run rampant around the room. Despite there being classrooms, and plenty of posters with learning mantras on them, it was always lunchtime, then recess, then snack time, then an hour-long fieldtrip.

In one first-grade classroom, the teachers simply watched the children play with toys for hours, only speaking to reprimand when some of the rowdier ones would hit others with blocks and trains. Children in wheelchairs were pushed into corners and left there to idle and talk to themselves, alone.

Despite this grim outlook, however, Carmen Rosa remains optimistic.

“I think that one day I’ll be better,” she says. “I think that one day they’ll heal me and I’ll be able to do everything and feel better. More than anything, I would like to help people just like me, who have disabilities and don’t have friends and are sad. I’m sad. So I want to help them.”