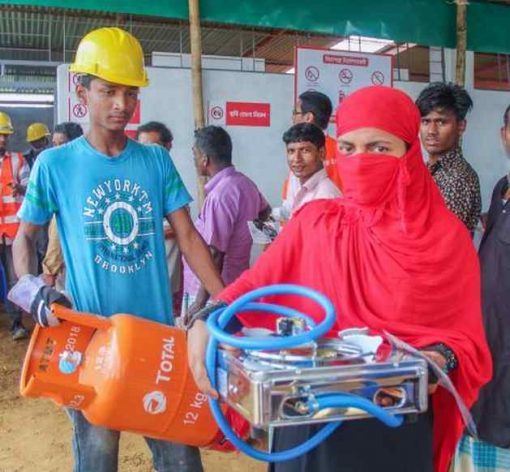 Cox’s Bazar, Aug 17 2018 - A major environmental project to provide around 250,000 families with liquid petroleum gas (LPG) stoves and gas cylinders has been launched by UN agencies and the government in Cox’s Bazar, Bangladesh, to help prevent further deforestation linked to the Rohingya refugee crisis.

At the official launch of phase one of the project yesterday (16/08), over 300 local villagers identified by local officials as extremely vulnerable and in need of support were the first to receive stove and gas sets. Thousands more will be distributed to Rohingya refugees and other host community families over the coming months.

Cox’s Bazar was home to significant areas of protected forest and an important wildlife habitat. But the arrival of over 700,000 Rohingya refugees fleeing violence in Myanmar over the past year led to massive deforestation as desperate families cut down trees and cleared land to make space for makeshift shelters.

With refugees and many local villagers almost entirely reliant on firewood for cooking, that damage has continued, and forest is being cleared at a rate of 700 metric tonnes – the equivalent of around four football fields of trees – each day. If cutting continues at the current rate, the area’s forest will be completely destroyed by the end of 2019, according to UN estimates.

“This is a vitally important project which will not only help mitigate and redress deforestation and environmental damage but will also play an important role in improving health and safety in the local and refugee communities,” said Sanjukta Sahany, head of IOM’s transition and recovery team in Cox’s Bazar.

Smoke from firewood being burned in homes and shelters without proper ventilation is a significant cause of health problems, particularly among women and young children, who spend much of their time indoors.

The reliance on firewood has also raised protection concerns, with most wood collection being carried out by children, who have had to venture further from homes to find wood, as the forest has been cut back. Competition for this increasingly rare resource is also a growing source of conflict between the refugees and local communities.

“By curbing the extraction of firewood from the remaining forests, it allows us to protect, re-enter and replant,” explained Peter Agnew, FAO’s emergency response coordinator in Cox’s Bazar. He noted that the alternative fuel project is part of the wider SAFE Plus project, which is designed to improve economic livelihoods for host communities, and in turn overall food security, as well as the resilience of the refugees, by empowering them through skills development.

“Over the next three years, several thousand people from the local and refugee communities will have livelihood opportunities working on forest rehabilitation with the SAFE Plus project, in coordination with the forestry department,” he said.