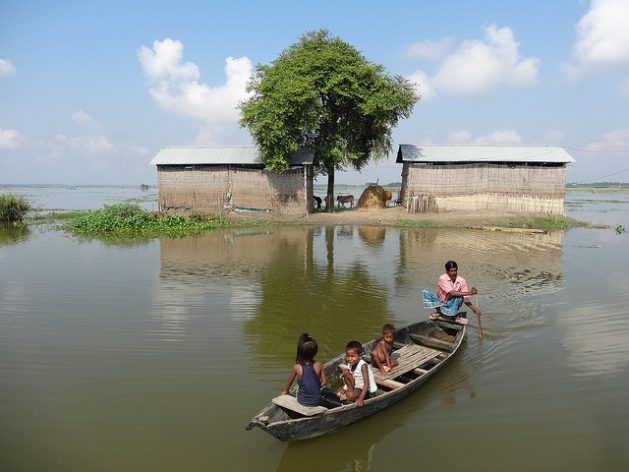 When isolated by floodwaters, families, like this one in Morigaon, India, have no choice but to use boats for transportation; even children must learn the survival tool of rowing. Credit: Priyanka Borpujari/IPS

UNITED NATIONS, Oct 16 2018 (IPS) - This year the Internal Displacement Monitoring Centre (IDMC) noted that 2017 saw the highest number of displacements associated with conflict in a decade-11.8 million people. But this is not a situation that is going to be resolved any time soon, says the organisation which has been reporting on displacements since 1998.

These numbers were published in the World Migration Report 2018, which was released by the International Organization for Migration (IOM) last month. The report also stated that an average of 25.3 million people are displaced each year because of natural disasters. “This will only get worse with climate change,” said IDMC’s director Alexandra Bilak in an interview with IPS.

Bilak has over 15 years of experience with NGOs and research institutes working on African conflicts. She lived in the Democratic Republic of Congo from 2004 to 2008 and in Kenya for the next five years. In 2014, she joined IDMC. The biggest change for her, claimed Bilak, was “disconnecting from the field and connecting to high political levels of decision making.”

The IDMC, part of the Norwegian Refugee Council, is the leading international institution of data analysis on internal displacement. Based in Geneva, Switzerland, the centre works towards creating dialogues on displacement and providing accurate metrics. IDMC, according to Bilak, takes data analysis to the next level: “We combine many methodological approaches to provide a databased to build research agendas. It is a very interest combination of quantitative and qualitative research, but not from an academic perspective.” She added: “The analysis wants to be practical and policy-relevant.”

Under Bilak, the institute has changed its focus. While three years ago the IDMC understood displacement as a human rights issue, now it treats it with a more comprehensive approach. “By doing that, it wasn’t having the right kinds of conversations,” claimed Bilak. Now, their employees are not only lawyers and political scientists, they are also anthropologists, geographers, and data analysts.

With a calmed voice, Bilak tells IPS that this shift was a team effort, and that she is very happy with the results. Excerpts of the interview below.

Inter Press Service (IPS): How did your interest on displacement start?

AB: I started my work in the Great Lakes region in Rwanda, but when I moved over to Eastern Congo I was exposed to the full scope of conflict impact. Displacement was a major issue. I was really struck with the capacity of communities to cope with the problem. That’s where my interest started.

Then I moved from one job to another and narrowed down on the issue of displacement. Now, at IDMC we are very interested in understanding the connections between internal displacement and wider migratory flows, cross border movements, and broader development challenges. At Geneva, you can bring the experience from the field to the higher level and see where it all ties in together.

IPS: What are your goals for the future of IDMC?

AB: I think we want to maintain this position as global authority and consolidate our expertise on data. We cannot rest on our laurels. We have to keep up our efforts. We need to continue building trust-based relationships with national governments. They are the change agents when it comes to finding solutions for internal displacement. You can’t achieve anything if you avoid them.

IPS: If national governments are the change agents, what’s the role of international organisations in displacement?

AB: Although it is a development issue for the national governments, there are many humanitarian implications that need to be addressed. International organisations provide that immediate protection and assistance that international displaced people need. This is the role they must continue playing, despite their reduced budgets. Also let’s keep in mind that there are many diplomatic efforts to prevent these conflicts.

This is the development, humanitarian and peace building nexus. They need to go hand in hand for a comprehensive approach. But yes, ultimately, it still boils down to political will.

IPS: What about natural disasters? How can we predict them to avoid their consequences?

AB: There are already models that project into the future and give a good sense of the intensity of natural hazards in the future. IDMC has actually developed a global disaster displacement risk model. There’s a way of having a sense of the scale and scope of what to expect in the future.

But our message has always been the same. This is only going to get worse with climate change, unless there is a significant investment in preventative measures like disaster-risk reduction and climate change adaptation.

We know which are the countries that are going to be most affected. The latest report from the IPCC (Intergovernmental Panel on Climate Change) on climate clearly pointed out what communities are going to be more affected in the future. This will impact internal displacement.

IPS: So, what would be your recommendation to a national government to manage this situation?

AB: There are many recommendations for those countries that suffer from the impacts. They need better early warning systems and preparedness measures, so people can be quickly evacuated in the right way.

Our recommendation is also to build on the good practices governments that have already been implemented. For example, in the Philippines displacement figures are part of their disaster loss database. It would be great if every country could have the same kind of national data system in place.

Other recommendations come from processes of relocation. In the Pacific, entire communities that are at risk of climate change impact have to be relocated. How are these communities going to be moved in a dignified way respecting their cultural heritage?

Finally, there also needs to be a gender perspective to make sure that women and children can be consulted in the process.

IPS: What do you predict for the next 12 months in terms of displacement?

AB: Based on what we are monitoring, Sub-Saharan Africa and the Middle East will continue to be areas of concern for us due to conflict. We are looking at a recent peak in displacement in Ethiopia. This is not a situation that is going to be resolved any time soon, so we will see a displacement crisis in the Democratic Republic of Congo, Somalia, South Sudan, Nigeria… also in Syria. We will look at high displacement figures next year.

In terms of disaster displacement, we will see massive hurricanes in Asia, which will have long-term consequences. There are pockets of displaced people that remain so for large periods of time, also in high-income countries like Japan.