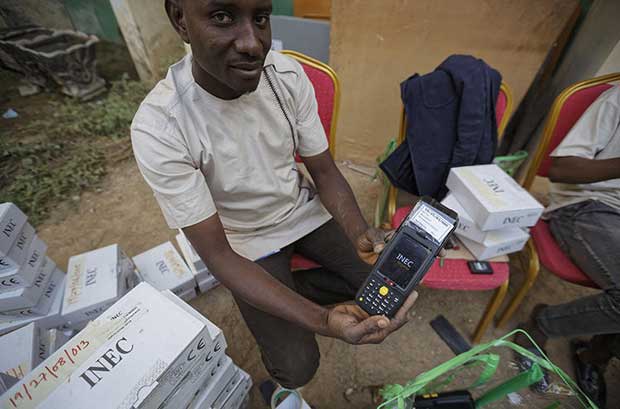 An electoral worker prepares identity card and biometric verification readers, at the offices of the Independent National Electoral Commission in Kano, northern Nigeria, on February 14, 2019. CPJ joined a call for Nigeria to ensure that internet and social media services remain connected during the upcoming elections. (AP Photo/Ben Curtis)

Feb 14 2019 - (CPJ) – The Committee to Protect Journalists joined more than 15 rights organizations and the #KeepItOn Coalition to call for Nigerian authorities to ensure that internet and social media services remain connected during upcoming elections, and safeguard internet speeds of websites and messaging applications. In early February, Nigeria’s federal government denied rumors of plans to shut down the internet during upcoming elections, according to the privately owned Guardian Nigeria and Quartz news outlets. Nigeria has two sets of elections scheduled in the coming weeks: federal elections on February 16 and state elections on March 2.

“The media is critical to this particular election and critical to people understanding both the [election’s] processes and procedures,” Festus Okoye, national commissioner of Nigeria’s Independent National Electoral Commission, told CPJ on February 13. Okoye also emphasized the importance of internet connectivity because the smart card readers used for voter identification are based on the internet. “Three networks–Glo, MTN, and Airtel–are powering them [the smart card readers], so if you jam the network there won’t be any election…that’s just the bottom line.” he said.