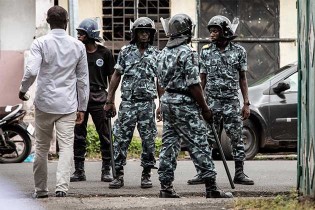 Two journalists held in pretrial detention since February in Comoros

By Editor, CPJ
(CPJ) – Authorities in the Comoros should immediately release journalists Abdallah Abdou Hassane and Oubeidillah Mchangama, who have been held in pretrial detention on an array of charges for over a month, the Committee to Protect Journalists said today.

By Editor, CPJ
(CPJ) – Zambia's minister of information and broadcasting should grant an appeal requested by the privately owned Prime TV broadcaster and allow the station back on air after the country's media regulator suspended its license for 30 days for alleged unprofessionalism, the Committee to Protect Journalists said today.

By Editor, CPJ
South Africa, one of the media freedom beacons in sub-Saharan Africa, will hold national and provincial elections on May 8. As the country celebrates 25 years of democracy, the press in South Africa faces old and new challenges, including physical harassment and cyber bullying. The press freedom environment, including the safety of journalists, will be one of the key indicators for the health of the country's democracy and the freeness and fairness of its polls.

By Editor, CPJ
(CPJ) – The Committee to Protect Journalists joined more than 15 rights organizations and the #KeepItOn Coalition to call for Nigerian authorities to ensure that internet and social media services remain connected during upcoming elections, and safeguard internet speeds of websites and messaging applications. In early February, Nigeria's federal government denied rumors of plans to shut down the internet during upcoming elections, according to the privately owned Guardian Nigeria and Quartz news outlets. Nigeria has two sets of elections scheduled in the coming weeks: federal elections on February 16 and state elections on March 2.

By Editor, CPJ
(CPJ) – The Philippine government's legal harassment of the news website Rappler and Maria Ressa, its founder and executive editor, took an alarming turn Wednesday when officers from the National Bureau of Investigation arrested Ressa at Rappler's bureau in Manila and held her overnight over a cyber libel case filed against her by the Justice Department. Ressa's arrest was in connection to a story published by Rappler in 2012, before the law was enacted. Ressa told CPJ before her arrest that the charge was "political" and that the Philippines has "weaponized" its cybercrime law. Ressa was released on bail on Thursday morning. CPJ's Asia Program Coordinator Steven Butler explored the implications of Ressa's arrest for press freedom in an op-ed for CNN.

By Editor, CPJ
The Committee to Protect Journalists today welcomed yesterday's ruling by Lesotho's Constitutional Court that criminal defamation is unconstitutional, calling it a significant step toward safeguarding press freedom in the country.
ADVERTISEMENT ADVERTISEMENT