Two journalists held in pretrial detention since February in Comoros 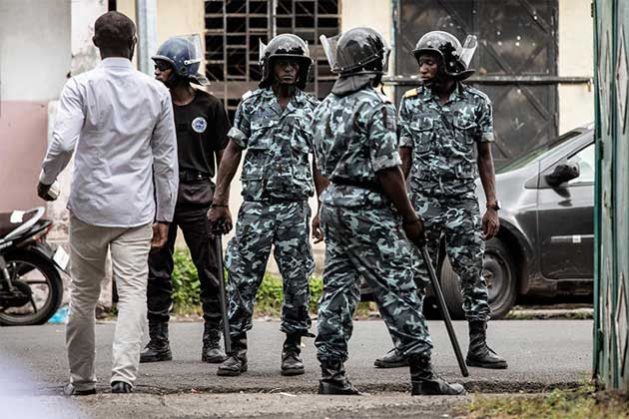 Gendarmerie officers stand guard on March 24, 2019, in Moroni, Comoros. Two journalists have been detained without trial in the country since February. (Gianluigi Guercia/AFP)

NAIROBI, Kenya, Mar 26 2019 - (CPJ) – Authorities in the Comoros should immediately release journalists Abdallah Abdou Hassane and Oubeidillah Mchangama, who have been held in pretrial detention on an array of charges for over a month, the Committee to Protect Journalists said today.

The journalists, who report for the Facebook news page FCBK FM, were arrested in mid-February and are detained in a prison in the Comoros capital, Moroni, while awaiting trial, according to their lawyer, Abdoulbastoi Moudjahid, who spoke with CPJ.

On February 12, the journalists were charged with defamation, disturbing public order, incitement to violence, offence against the head of state, insulting the magistrate, forgery, and use of false materials, according to their lawyer and FCBK FM; they have both pled not guilty.

According to FCBK FM and Abdoulbastoi, the journalists frequently criticized the government in their posts and Facebook Live broadcasts, including making at least one call for President Azali Assoumani to resign.

The country held its presidential election on March 24 and has not yet released the results, according to media reports; the opposition alleges that the polls were rigged to secure Azali’s reelection.

“That these two journalists have been held in pre-trial detention so long suggests that this case is little more than a pretext to silence critical voices during an election period,” said CPJ’s Sub-Saharan Africa representative, Muthoki Mumo. “Authorities should free Abdallah Abdou Hassane and Oubeidillah Mchangama and drop the charges against them.”

Abdallah was arrested on February 9 at the supreme court in Moroni, where he had gone to report on a court decision that barred several opposition politicians from running in the presidential elections, according to Abdoulbastoi and FCBK FM.

Oubeidillah was arrested on the morning of February 11 at the entrance of the Moroni court where he was investigating Abdallah’s arrest, according to Abdoulbastoi.

CPJ reached out to FCBK FM via its Facebook page and did not receive a response.

Abdoulbastoi appealed the charges against the journalists on February 25 on the grounds that the original order for their detention was unlawful, but the presiding judge dismissed his case as “unfounded,” the lawyer told CPJ.

Protests have been staged in Moroni calling for the journalists’ release, according to news reports by French news agency RFI. The agency reported that the organizers of the protests feared that the journalists might be detained until after the presidential inauguration in May.

CPJ tried to reach Comorian Interior Minister Mohamed Daoudou via multiple calls and text messages but did not receive a response. Emails from CPJ to the ministry of foreign affairs and to the Comorian mission at the United Nations went unanswered.