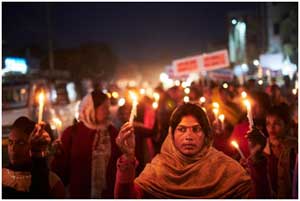 NEW DELHI, Feb 26 2019 (IPS) - In an historic first, thousands of people participated in a 10,000-kilometre long Dignity March across India to raise awareness about sexual violence, bring an end to stigma faced by survivors, and highlight the barriers women and children face in accessing justice.

Covering 200 districts in 24 states, the March began in Mumbai on December 20 and ended on Feb 22, with around 5000 gathering at the Ramlila Maidan in New Delhi, a ground famous for hosting protests and political rallies. On this warm February afternoon, they were present for a momentous gathering of sexual assault survivors, many of whom had travelled across India to attend. The ambitious idea was originated and organized by Rashtriya Garima Abhiyan (National Campaign for Dignity), an Indian human rights group which explained, “The Dignity March is a call for women and children to speak out their experiences of sexual abuse without shame. It is also an appeal for the stakeholders and the larger community to create a healthy, non-judgmental and a safe environment to support the voices of the survivors and to take the fight for justice forward.”

“It is time to speak up, condemn the act of sexual violence and to end the culture of victim shaming/blaming and shift the blame. Collectively, we must hold the state actors accountable to ensure justice to survivors.”

Numerous community events were held along the route, with survivors of sexual violence joined by family members, activists, lawyers, police, actors and politicians, who have come forward in support.

Rashtriya Garima Abhiyan estimates that during the Dignity March – also called the ‘Garima Yatra’ or ‘journey’ – they interacted with 25,000 survivors of sexual violence, 2000 lawyers, 3000 journalists and 200 policy makers and government officials.

It has attracted widespread media coverage, with sexual assault survivors welcoming the opportunity to come together and share their stories. Many are from communities that are marginalized because of caste, class and religion, and their experiences have previously been largely ignored by mainstream women’s movements. One of the numerous survivors who participated in the March is Bhanwari Devi, a social worker who was gang raped in 1992 by “upper” caste men for attempting to stop a child marriage.

Her fight for justice was a pivotal moment in India’s women’s rights movement as her case prompted the Supreme Court to issue the Vishakha Guidelines for combating sexual harassment at the workplace, and it eventually led to the introduction of a national law in 2013 prohibiting it.

Despite this, in her own gang rape case, Bhanwari Devi is still fighting for justice 26 years later, as her appeal languishes in the Rajasthan High Court.

Bhanwari Devi’s case is representative of the problems survivors of sexual violence in India face in accessing justice. The first-hand accounts shared by women participating in the March demonstrate that every day, survivors are silenced, threatened and intimidated.

They face discrimination and inaction from the police and other legal authorities, and are often coerced into settling or compromising their cases even though this is not permitted under Indian law.

Survivors are even being harmed instead of helped by doctors. The two-finger test continues to be widely practiced today despite being unscientific, traumatizing, illegal, and a violation of human rights. It involves a medical practitioner inserting two fingers into the vagina in an attempt to determine if the hymen is broken and to test laxity.

As the WHO states, the two-finger test has no scientific or clinical basis, and there is no examination that can prove a girl or woman has had sex or is sexually active.

The procedure was banned by India’s Supreme Court and guidelines were released by the Government clarifying that it has no bearing on cases of sexual violence.

Despite this, it is still being performed to assert whether sexual assault survivors are “habituated to sex”, although sexual history is irrelevant in a rape trial.

These are just some of the many reasons why rape is one of the most under-reported crimes in India, which has a population of over 1.33 billion. Some estimates indicating that over 90% of rape cases in the country remain unreported.

To make matters worse, the conviction rate for crimes against women in India remain abysmally low – only 18.9% according to statistics by the National Crime Records Bureau from 2016 (the lowest percentage in a decade). Comparatively, the average conviction rate for all crimes is around 47%.

The result is that perpetrators of sexual assault are in the main able to act with impunity as they are not held to account for their actions, and are therefore able to reoffend without fear of consequence.

In contrast, the women and children being harmed are denied the justice they deserve and remain at risk. This is totally unacceptable and change is urgently needed. The Dignity March has attempted to address some of these issues by calling upon stakeholders and the community in general to provide a healthy and supportive environment for survivors of sexual violence.

Rashtriya Garima Abhiyan and activists working alongside are aiming to create a national network of survivors in order to ensure their voices are heard in policymaking.

They have also interacted with the police and other officials to advocate for better implementation of laws, and allocation of more financial resources towards supporting survivors, included equipping One Stop Crisis Centers. Their efforts are already bearing fruit. Ashif Shaikh, founder of the Rashtriya Garima Abhiyan, told the crowd at Ramlila Maidan: “The Chief Minister of Madhya Pradesh, after hearing the survivors and our demands, has committed to taking steps to set up a special police force to investigate crimes against women, as well as fast-track courts to try such crimes.”

Another key aim of the Dignity March has been to end the culture of victim shaming and blaming, which has enabled perpetrators to go unpunished.

As a survivor from Raipur noted, “When we are in our villages, and something happens, we feel alone. Who is going to listen to our experiences, who will consider it important? But in this yatra, we have met others who have gone through the same experience. We understand each other’s pain and sorrow. I am leaving this yatra feeling less alone.” The thousands of people who came out to support survivors during the March have only taken the first, important step. There is a lot more work to be done to change societal and national attitudes, and to ensure that survivors receive support instead of shame and blame when they break the silence and speak out. It is now time for others to listen and take positive action.

*Divya Srinivasan is a qualified attorney with a background in women’s rights, including work on sexual harassment in the workplace and sexual violence against women. You can follow her on Twitter @sdivya91. **Equality Now is an international human rights organization that works to protect and promote the rights of women and girls around the world by combining grassroots activism with international, regional and national legal advocacy. It’s international network of lawyers, activists, and supporters achieve legal and systemic change by holding governments responsible for enacting and enforcing laws and policies that end legal inequality, sexual trafficking, sexual violence, and harmful practices such as female genital mutilation and “child” marriage. For details of current campaigns, go to www.equalitynow.org, Facebook @equalitynoworg, and Twitter @equalitynow.