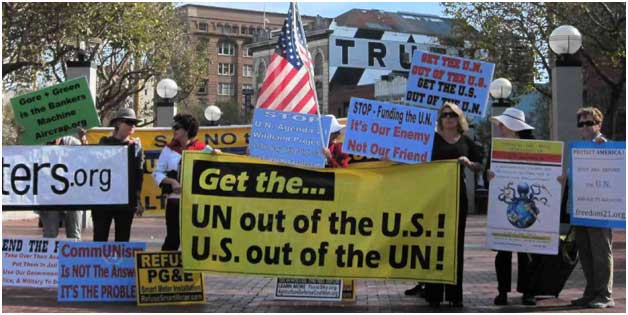 UNITED NATIONS, Mar 28 2019 (IPS) - The widespread political repression in countries such as the Philippines, Egypt and Saudi Arabia– and rising right-wing nationalism in the US, Brazil, Italy, India, Poland and Hungary– have increasingly triggered attacks on human rights and civil society organisations (CSOs).

The annual 2019 “State of Civil Society” report released March 27 details a “terrifying picture of fundamental freedoms under serious threat in 111 of the world’s countries”– well over half of all the countries globally.”

Only four per cent of the world’s population live in countries where fundamental freedoms of association, peaceful assembly and expression are respected and enabled.

Authored by the Johannesburg-based CIVICUS, a global alliance of CSOs and activists dedicated to strengthening citizen action and civil society worldwide, the study warns that the rise of right-wing populism and the influence of anti-rights extremist groups are helping to fuel these threats to democracy in so many nations.

But the report also outlines the various ways, in various countries, that civil society and citizens are fighting back, and claiming victories in defence of their rights.

As one of the “alarming examples,” it singles out the Italian government’s decision to impose a hefty fine on one of the world’s best known humanitarian organisations, Médecins Sans Frontières (MSF), while simultaneously freezing their assets, impounding their rescue vessel and investigating their staff for human trafficking…in retaliation for their efforts to save refugees from drowning in the Mediterranean Sea.

And there were also instances of activists being charged, tried and convicted in the United States for providing water supplies for migrants crossing the deadly Sonoran desert on the US/Mexico border.

“We need a new campaign, at both global and domestic levels, to reinforce humanitarian values and the rights of progressive civil society groups to act,” added John.

The theme of this year’s ICSW, which takes place in Belgrade April 8-12, is “The Power of Togetherness” focusing on harnessing the power of collective action to respond to rights restrictions and rightwing globalism.

According to the CIVICUS report, in Europe, the US and beyond – from Brazil to India – right wing populists, nationalists and extremist groups are mobilising dominant populations to attack the most vulnerable.

This has led to an attack on the values behind humanitarian response as people are being encouraged to blame minorities and vulnerable groups for their concerns about insecurity, inequality, economic hardship and isolation from power.

This means that civil society organisations that support the rights of excluded populations such as women and LGBTQI people and stand up for labour rights are being attacked.

As narrow notions of national sovereignty are being asserted, the report points out, the international system is being rewritten by powerful states, such as China, Russia and the USA, that refuse to play by the rules.

“Borders and walls are being reinforced by rogue leaders who are bringing their styles of personal rule into international affairs by ignoring existing institutions, agreements and norms”.

The report also points to a startling spike in protests relating to economic exclusion, inequality and poverty, which are often met with violent repression, and highlights a series of flawed and fake elections held in countries around the world in the last year.

“Democratic values are under strain around the globe from unaccountable strong men attacking civil society and the media in unprecedented – and often brutal – ways,” said Andrew Firmin, CIVICUS’ Editor-in-Chief and the report’s lead author.

And 2018 is being billed as a year in which regressive forces appeared to gain ground.

But the past year was also one in which committed civil society activists fought back against the rising repression of rights.

The report points out to the successes of the global #MeToo women’s rights movement to the March for Our Lives gun reform movement led by high school students in the US– to the growing school strike climate change movement, collective action gained ground to claim breakthroughs.

“Despite the negative trends, active citizens and civil society organisations have been able to achieve change in Armenia, where a new political dispensation is in place, and in Ethiopia, where scores of prisoners of conscience have been released,” said John.

These include developing and promoting new ideas on economic democracy for fairer economies that put people and rights at their centre. Notably, the report calls for reinforcing the spirit of internationalism, shared humanity and the central importance of compassion in everything we say and do.

Meanwhile, says the report, international institutions mostly struggled, hamstrung by the interests and alliances of powerful states, doing little to respond to the great challenges of the day, failing to fight overwhelming inequality, silent on the human rights abuses of states such as Saudi Arabia and Sudan, letting down the people of Syria and the Rohingya people of Myanmar, among many others.

Asked if the United Nations shouldn’t name and shame these countries where right wing extremism is on the rise, Mandeep Tiwana, Chief Programmes Officer at CIVICUS, told IPS the UN is facing serious funding challenges which make it dependent on the contributions of big countries for its operating budget.

“This might be leading to situations where ultra-nationalist leaders or those who subscribe to authoritarian precepts are getting a free pass for their actions that flagrantly violate the spirit of the UN Charter and also international law”.

He also pointed out that the funding situation is so dire that a number of UN bodies are courting private corporations to shore up their funding including with regards to achieving the Sustainable Development Goals (SDGs) which could lead to undesirable policy influence in the fight against inequality, on labour rights and on efforts to reduce high level corruption.

Often restrictions on civil society are worsened when the increasingly close partnerships between governments and the private sector go unscrutinised.

It’s also important to remember, said Tiwana, that while the UN is increasingly turning to the private sector for assistance in achieving sustainable development, it is often civil society organisations that are working hand in hand with the UN in delivering humanitarian services on the frontlines, and risking their lives doing so.

“The divisive and selfish actions of nationalist leaders indicate that we might be heading towards a full-blown crisis of the multilateral system”.

“In the present situation where we are facing a crisis of compassion from the actions of meanspirited right wing populists, it’s important that the UN stands with civil society organisations and activists working towards just, equal and sustainable societies”.

He argued that public statements from senior UN officials across the institutions’ various pillars, followed by actions and willingness by UN officials on the ground to engage governments that attack human rights and civil society, are urgently needed in the present scenario.

The UN needs to make common cause with political leaders and governments committed to strengthening multilateralism and the international human rights framework in these testing times, he declared.