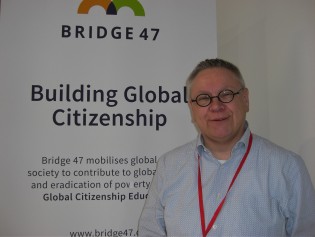 By Sivananthi Thanenthiran
Over a week ago – on April 3 – Brunei, the tiny South East Asian kingdom on the island of Borneo, announced its citizens would face the full force of the Shariah law.

By Helen Kidan
As the first anniversary of the swearing on Ethiopia’s Prime Minster Abiy Ahmed rolled around last week, Ethiopians – and observers worldwide – marvelled at the pace and scale of radical reform he has brought to the formerly repressed country in the past year.

By Tharanga Yakupitiyage
Counterterrorism measures are not only affecting extremist groups, but are also impacting a crucial sector for peace and security in the world: civil society.

By Mouna Ben Garga
Sometimes a peak into the future reminds us just how stuck we are in the past and present. It was the talk of the Middle East’s largest annual media industry gathering: a robot journalist – the region’s first – that wowed some 3,000 industry leaders and practitioners at the Arab Media Forum (AMF) in Dubai recently.

By Thalif Deen
The civic space in several African countries, including Tanzania, Burundi, Zambia, Sudan, Mozambique, Somalia and Eritrea, is gradually shrinking – and mostly under authoritarian leaders and repressive regimes.

By Lysa John
It is an incredible privilege to welcome you all to the ‘International Civil Society Week’. I am going to remind us of the reasons that make it so important for us to be here in Belgrade this week.

By Thalif Deen
A former UN Secretary-General, the late Kofi Annan, once described civil society organizations (CSOs), as “the world’s new superpower” – perhaps ranking behind the US and the former Soviet Union.

By Josef Benedict
When the one-year anniversary of Malaysia’s historic presidential election outcome rolls around in early May, the wave of euphoria that followed it will be all but a wistful memory.

By Thalif Deen
Faced with an uneven battle against right wing nationalist governments, repressive regimes and extremist groups, scores of civil society organizations (CSOs) are gearing themselves to fight back.

By Lysa John
“I never thought it would get so big and I think it is amazing.” The words of a 16-year-old Swedish teenager who skipped school to protest outside her government’s inaction on climate change. Greta Thunberg is marvelling at how, in just a few short months, her solitary protests outside Sweden’s parliament, have inspired and united hundreds of thousands of young people and others across the globe into a powerful, growing grassroots movement for climate change action.

By Michel Forst
They are ordinary people – mothers, fathers, sisters, sons, daughters, brothers, friends. But for me they are extraordinary people – the ones who have the courage to stand up for everyone else’s rights. They are the human rights defenders.

By Thalif Deen
The widespread political repression in countries such as the Philippines, Egypt and Saudi Arabia-- and rising right-wing nationalism in the US, Brazil, Italy, India, Poland and Hungary-- have increasingly triggered attacks on human rights and civil society organisations (CSOs).

International Civil Society Week (ICSW) is a global gathering for civil society to connect, debate and create shared solutions. Hosted by CIVICUS, a global alliance of civil society organisations in partnership with Civic Initiatives, a Serbian association of NGOs, the conference’s theme, “The Power of Togetherness”, explores how people and organisations around the world can, and are, working together to enable and defend spaces for civic action in a world where global transformations are reshaping how civil society functions.