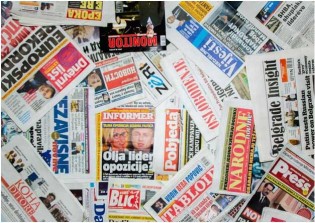 By Susan Wilding
Anti-government protesters invading Serbia’s state-owned television station, demanding that their voices be heard. Journalism bodies writing to the Albanian prime minister over plans to censor online media outlets. A Belgrade corruption-busting reporter forced to flee his house that had been torched; a Montenegrin investigative journalist shot in the leg outside her home.
ADVERTISEMENT ADVERTISEMENT