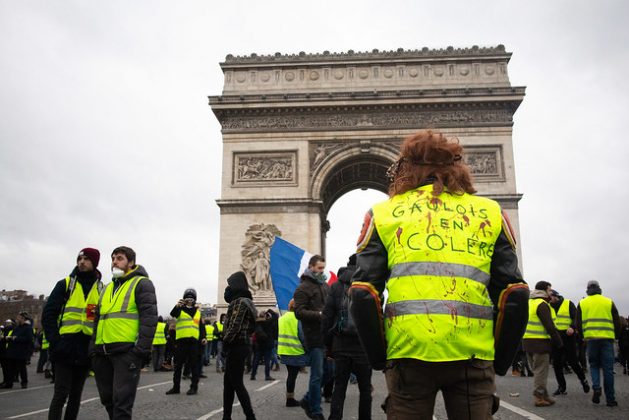 Representatives said that civil society and concerned citizens worldwide have started to respond with “renewed determination” to the unprecedented challenges facing the world, and that this resolve will be in the spotlight during International Civil Society Week (ICSW). Pictured here is a protest by France’s Gilets Jaunes (or Yellow Vests) from earlier this year. Credit: Olivier Ortelpa/CC By 2.0

PARIS, Apr 7 2019 (IPS) - Amid rising attacks on rights campaigners, and mass protests in countries such as France and Serbia, civil society groups are urging governments to ensure the protection of “democratic values” and freedom of expression.

In Belgrade, some 850 human rights campaigners, civil society leaders and engaged citizens will meet Apr. 8 to 12 for the annual International Civil Society Week (ICSW) – a gathering co-hosted by the Johannesburg-based global civil society alliance CIVICUS and Serbian association Civic Initiatives, with the support of the Balkans Civil Society Development Network.

Under the theme, “The Power of Togetherness”, ICSW 2019 “seeks to generate deep conversations among civil society leaders, social justice advocates, development practitioners, members of the philanthropic community, diplomats and others on emerging global challenges and how civil society should be responding to these,” said Mandeep Tiwana, CIVICUS’ chief programmes officer.

“Defence of democratic values, civic space and participation, along with citizen action, will be among the topics of discussion,” he told IPS in an email interview while en route to Belgrade.

The ICSW meeting comes at a time when human-rights organisations, campaigners and media workers in many regions have experienced growing repression, including arrests, beatings and killings that have shocked and outraged international observers.

“In country after country, democracy is under attack, with populist and right-wing movements gaining ground and democratic regression being witnessed even in countries historically considered bastions of democracy,” CIVICUS says.

“Activists, journalists and people who speak out against growing restrictions are persecuted. A historic rise of populist leaders continues to erode fundamental freedoms, heightening political polarisation and sowing division,” the group adds.

Representatives said that civil society and concerned citizens worldwide have started to respond with “renewed determination” to the unprecedented challenges facing the world, and that this resolve will be in the spotlight during ICSW, which includes a large youth participation.

“This year’s event in Serbia comes at a critical and opportune time for civil society and the world’s citizens to realise the power of unified, collective action to challenge a global trend that threatens our fundamental freedoms,” said Lysa John, CIVICUS’ Secretary General.

The discussions will take place against a backdrop of unrest in various countries: massive public demonstrations have been continuing in Serbia, for instance, while France’s Gilets Jaunes (or Yellow Vests) marched again on Apr. 6 in Paris and other cities for the 21st weekend in a row.

This latest French strife began last November in response to fuel price increases, and the demonstrators say they won’t give up until their demands are met for a restructuring of French society so that the “elite” aren’t always in charge.

But some protestors have also participated in violence, looting and the targeting of media professionals, as reporters covering the marches have come under attack.

Media workers, in fact, often find themselves between a rock and a hard place, caught amongst the security forces and protestors as they try to report on turbulent events. CIVICUS said that the role of the media and their relationship with civil society will be a key topic of discussion at ICSW, alongside the focus on protecting rights campaigners.

“CIVICUS is working in several ways to stop attacks on members of the media and civil society activists targeted for exposing rights violations or speaking truth to power,” Tiwana said. “We engage with a broad range of civil society organisations that support press freedom using several approaches ranging from in-depth participatory research and analysis to raising awareness of attacks on the media, strategic coalition building, and directly engaging decision-makers at the national and international levels.”

He told IPS that joint efforts had contributed to the “release of journalists and the scrapping of repressive bills that restrict media freedoms” in some instance, while in others the efforts had “helped put serious  violations of media freedoms on the UN’s radar through its various human rights mechanisms”.

The choice of Serbia’s capital as the 2019 ICSW venue will draw attention to current protests and also recall the bloody recent history of the Balkans, highlighting the need for international vigilance in protecting rights, according to civil society groups.

“This region, and particularly Serbia, demonstrates that changing laws, strategies or governments offers no guarantees – democracy does not exist if it is not built constantly. By hosting this year’s event in Belgrade, we will convene and send messages rooted in local circumstances and, in the same time, fully reflecting global challenges,” she said.

Ahead of the meeting, Serbia and four other countries have been added to a global watchlist of countries that have seen an “escalation in serious threats to fundamental freedoms in recent weeks and months”, according to CIVICUS Monitor, an online platform that tracks threats to civil society across the world.

Citizens of all five countries (Afghanistan, Saudi Arabia, Sudan, and Venezuela are the others) are experiencing increasing rights violations that “include killings, attacks on protesters, media restrictions and arbitrary detentions of human rights defenders”.

“It is critical that these five governments wake up to their failure to respect international law and take swift action to respect their citizens’ most basic freedoms in a democratic society,” Belalba said.

CIVICUS is also calling upon “neighbouring states and international bodies to put pressure on these countries to end the repression”.