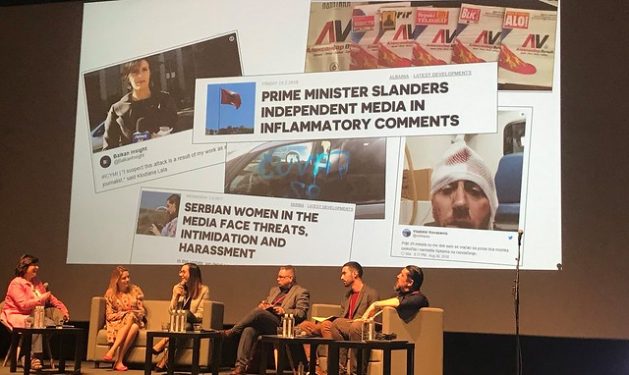 Infringements of press freedom and the targeting of journalists is one of the topics being discussed at the International Civil Society Week (ICSW 2019) - an annual gathering of civil society leaders, activists and engaged citizens taking place in the Serbian capital Apr. 8-12. Courtesy: CIVICUS

Most journalists would agree with her. But beyond the threat of physical harm, women reporters and journalists of colour run another risk: being harassed online, with the spouting of sexist and racist venom.

This, of course, happens to rights defenders as well, all over the world. But in the case of women, the harassment is “sexualised … sometimes with threats of rape,” said Josimovic.

“How does one protect oneself?” she asked, during a panel discussion on press freedom at International Civil Society Week (ICSW 2019) – an annual gathering of civil society leaders, activists and engaged citizens taking place in the Serbian capital Apr. 8-12.

Co-hosted by the Johannesburg-based global civil society alliance CIVICUS, the meeting is focusing on a range of issues that include infringements of press freedom and the targeting of journalists.

As the event took place, news surrounding the deaths of media workers continued. On Apr. 11, the Director-General of the United Nations Educational, Scientific and Cultural Organisation (UNESCO), Audrey Azoulay, issued a statement condemning the killing of a sports reporter in the north-western Mexican town of Salvador Alvarado on Mar. 24.

“I condemn the killing of Omar Iván Camacho Mascareño,” stated Azoulay. “I trust the investigation underway will enable the authorities to bring the perpetrator of this crime to justice.”

Mascareño, of local radio broadcaster Chavez Radiocast, was found dead with signs of severe head trauma and injuries indicating that he had been beaten to death, according to media reports.
UNESCO issues its “condemnations” on a regular basis, given the frequency of attacks.

The UN agency has the mandate to promote the safety of journalists and does so “through global awareness-raising, capacity building and a range of actions, notably the UN Plan of Action on the Safety of Journalists and the Issue of Impunity”, according to the organisation.

This includes a module on Combatting Online Abuse: When Journalists and Their Sources are Targeted, but Josimovic and others stress that enough isn’t being done to end the specific harassment of women journalists.

“I think that media outlets don’t have good support systems for this kind of attacks,” she told IPS. “The legal aspect is also complicated.”

Social media companies, for instance, will not reveal the address of the perpetrators when the targeted individual complains, she said. Additionally, there is sometimes a lack of solidarity from editors and colleagues who have never experienced the harassment.

“Because it’s not happening in the real world, people kind of minimise the effect,” she added. “But women in general face more harassment on-line. In every sector, it’s there.”

Anyone who has doubts about this has only to look at some of the reports via the International Women’s Media Foundation, she said. 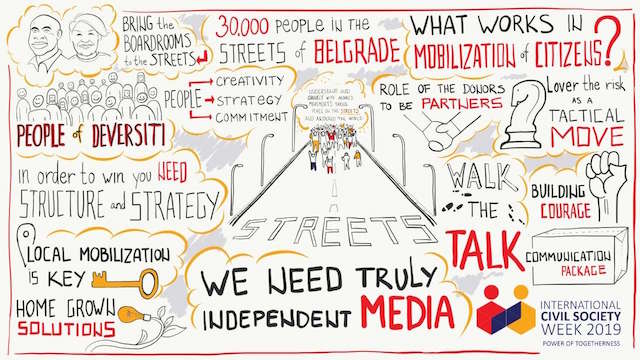 Rights activists say that broad coalitions were needed to promote the protection of rights and that journalists and human rights advocates need to work together. Courtesy: CIVICUS

Because of the similarity in methods used to attack rights defenders globally, press freedom groups and civil society organisations should increase ways of working together, said some delegates at the ICSW meeting.

“Journalists and human rights advocates are the centrepiece of any strategy,” he told IPS. “The protection of freedom of expression and freedom of assembly are in the interests of both.”

Responding to a question about required journalistic “distance” and impartiality, he acknowledged that sometimes the relationship between the media and civil society can become too close.

“We do need transparency and accountability on all sides,” he said. “But building coalitions can make advocacy more powerful.”

For Dragan Sekulovski, executive director of the Association of Journalists of Macedonia – a country that’s “a champion when it comes to wiretapping” – part of the defence of media needs to come from the sector itself.

That includes promoting quality journalism and “leaving this to the audience to judge”, he said. In this way, public opinion may swing in favour of the media, helping to deter attacks and harassment.

“Quality” journalism requires resources, however, and as various media groups point out, the sector has been ravaged over the past years by job losses, low pay, copyright abuses and other ills.

This is compounded by declining public trust – because of a range of factors, including smear campaigns, accusations of purveying “fake news”, journalists’ own behaviour, and, of course, calling media “the enemy of the people” as American President Donald Trump has done.

According to the Committee to Protect Journalists, many of Trump’s tweets so far as president has “insulted or criticised journalists and outlets, or condemned and denigrated the news media as a whole”.

It has thus become an uphill battle to get some sections of the public to see the importance of journalists’ work, and to engage actively in protecting media freedom, said activists at the ICSW meeting.

“Media organisations need to engage with citizens to make them understand why (citizens) need them,” said Josimovic.

Whether this would stop the attacks and harassment, especially of women journalists, is anyone’s guess. The issue will no doubt be raised again during discussions May 1-3, when the “main celebration” of UNESCO’s World Press Freedom Day takes place in Addis Ababa, Ethiopia.