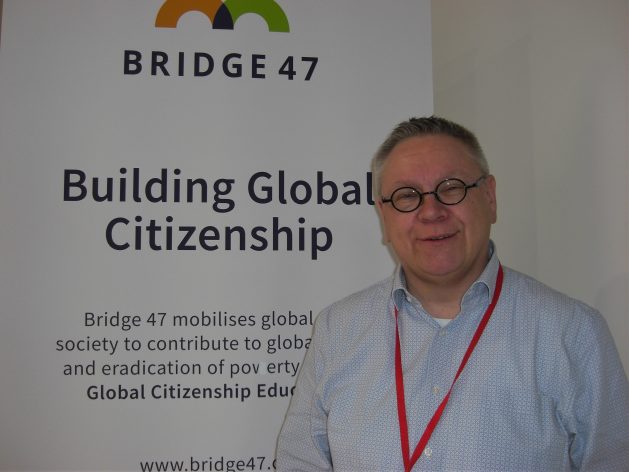 The pairs of strangers or acquaintances who received this instruction gesticulated, smiled, shook their heads, touched their hearts and otherwise tried to transmit a message.

The exercise was meant to help diverse groups bridge communication gaps. It formed part of a series of sessions led by Bridge 47, a Finland-based organisation created “to bring people together to share and learn from each other” with the help of global citizenship education (GCED).

Co-hosted by the Johannesburg-based global civil society alliance CIVICUS and Serbian association Civic Initiatives, the event overall brought together more than 850 delegates from around the world, with Bridge 47 being the “biggest event partner”.

Their sessions on dialogue showed how often people misconstrue what others are trying to say and how that can lead to conflict. In the exercise on silent communication, participants later explained in words what it was they’d been trying to communicate. Many of the “listeners” had got the signals wrong.

“This meeting showed how we need to act together,” said Rilli Lappalainen, Bridge 47’s founder and steering group chairperson. “It showed how we need to allow the space for dialogue, and that dialogue is the essence of peaceful society. If we really want to make a change, we need to cooperate and communicate, rather than everyone sitting in their own box.”

Lappalainen said the name of the organisation comes from Target 4.7 of the United Nations’ Sustainable Development Goals (SDGs), set in 2015 for achievement by 2030.

Goal 4 is to “ensure inclusive and equitable quality education and promote lifelong learning opportunities for all”.

That is a mouthful, and some people may be put off by the usual UN-speak, but Lappalainen told IPS the simple message is that educators, rights defenders and civil society groups need to “join forces” across different sectors and to “build bridges”.

For the UN, an indicator of Target 4.7 is the “extent to which (i) global citizenship education and (ii) education for sustainable development, including gender equality and human rights, are mainstreamed” at all levels.

“This was the first time the UN recognised non-formal and informal education,” said Lappalainen. “Formal education is absolutely needed but it’s not enough, and we need to recognise the importance of learning outside of the school system. Part of our work is that we advocate for governments to give the space and respect for this kind of education.”

Officials say that GCED is an important system to teach mutual respect. According to the United Nations Educational, Scientific and Cultural Organisation (UNESCO), global citizenship education is a response to the continuing challenges of human rights violations, inequality and poverty that “threaten peace and sustainability”.

The agency says that GCED “works by empowering learners of all ages to understand that these are global, not local issues and to become active promoters of more peaceful, tolerant, inclusive, secure and sustainable societies”.

Christopher Castle, chief of UNESCO’s section for Health and Global Citizenship Education, said in an interview that it was important for schoolchildren to be given the opportunity to think about values such as “solidarity and cooperation”.

In addition to children, global citizenship education can benefit youth and adults, says UNESCO. This learning can be provided in various ways, but the main method in most countries will be through the formal education system. As such, governments can integrate the concept either as part of existing programmes or as a separate subject.

The “values” of global citizenship have long been discussed, but the concept gathered momentum with the launch of the UN Secretary-General’s Global Education First Initiative (GEFI) in 2012. This identified “fostering global citizenship” as one of the three priority areas of work, along with access to and quality of education.

During ICSW, participants at the Bridge 47 events included teachers, administrators and various members of civil society groups. Tom Roche, a furniture-maker from Ireland and founder of the NGO Just Forests, said the education sessions were useful in learning to create links and to navigate divides.

“We often have to work with people who have opposing views from us,” he told IPS, “We need skills to be able to understand everyone.”

Roche said that as a carpenter, he began questioning the use of imported wood in furniture-making and became concerned about the destruction of forests. Over the years, he has developed educational resources for schools in Ireland, to inform students about the effects of society’s dependence on wood, he said.

He also gives input to policies for “responsible wood procurement”, despite lack of understanding from some associates. “People used to say: ‘oh, you’re a tree-hugger’, and I would say that ‘no, we need to be responsible about how we cut down trees,’” he told IPS.

Roche added that he was at the Belgrade meeting to show support as well for the “frontline defenders” of the environment and of forests, many of whom have been attacked and even murdered over the past decade.

“The issue is very important at this meeting, and it should be,” he said, pointing out that the GCED events provided “new ways to deliver the same message”.

Along with communication exercises, Bridge 47 said that the use of story-telling, art and satire was important to have an impact on social movement. (Amsterdam-based cartoonist Floris Oudshoorn did live drawings of the group’s ICSW discussions, for instance, covering climate change, rights activism and a range of other issues.)

“We want to encourage active citizenship,” said Nora Forsbacka, Bridge 47’s project manager. “We want citizens to speak out and take action, to reflect on our place in the world and the privileges we carry. All this requires a significant transformation in how we think about things.”

** In this version the lede contains additional information describing a communication exercise.