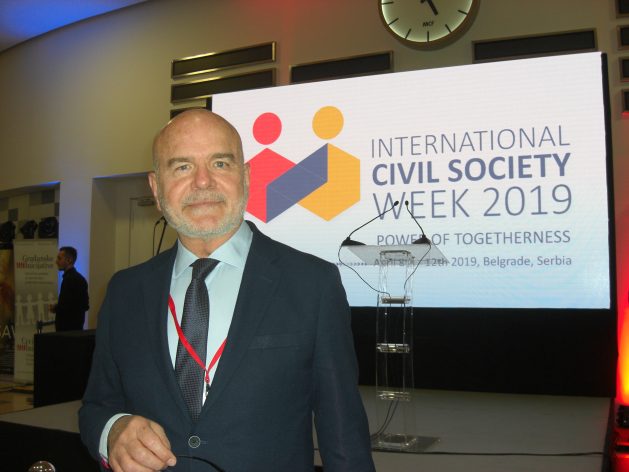 Michel Forst, Special Rapporteur on the situation of human rights defenders next report will focus on impunity, as only about 5 percent of attacks on rights defenders have been investigated and the perpetrators “brought to justice”. Credit: AD McKenzie/IPS

BELGRADE, Apr 10 2019 (IPS) - The murder of Brazilian politician and human rights activist Marielle Franco just over a year ago and attacks on other rights activists around the world have galvanised civil society organisations, with the United Nations heightening its own strategy to protect rights defenders.
However, some countries aren’t interested in cooperating with civil society or international governmental bodies and even actively engage in smear campaigns against rights advocates.

“An increasing number of states have now refused to cooperate with the UN,” said Michel Forst, Special Rapporteur on the situation of human rights defenders, in the Office of the United Nations High Commissioner for Human Rights.

“They don’t want to invite any more special rapporteurs to visit the countries or to produce reports,” he told journalists at a press briefing during International Civil Society Week (ICSW 2019), an annual gathering of civil society leaders, activists and citizens taking place in the Serbian capital this week, Apr. 8-12.

The meeting – co-hosted by the Johannesburg-based global civil society alliance CIVICUS – has brought together more than 850 delegates who are focusing on issues ranging from “the crackdown on media freedom to emergency assistance for NGOs under attack”. It is also addressing the “power” of solidarity alongside greater accountability.

Forst said he was attending the event to learn from the participants. His next report, to be presented during the UN General Assembly in the fall, will focus on impunity, as only about 5 percent of attacks on rights defenders have been investigated and the perpetrators “brought to justice”, he told journalists.

A growing problem in protecting rights defenders is the way in which some states try to defame activists, Forst said. In regions from Europe to Latin America, there are on-going campaigns to discredit rights advocates, and public opinion can be influenced by the derogatory terminology.
“These campaigns are dangerous for defenders,” he said. “They are called ‘enemies of the state’, they are called ‘promoters of western values’, they are (said to be) ‘against development’.”

In some countries, activists are also accused of having links to terrorism and of opposing progress when they try to block projects that are disastrous for the environment or for indigenous peoples.

He said the Belgrade ICSW meeting was important for activists to see that what is happening in their home country or region may also be taking place elsewhere, so that they can try to build bridges and strengthen links.

The meeting has in fact highlighted similarities in methods of repression around the world – methods that include not only physical attacks, but surveillance, travel bans, on-line harassment and the use of government structures and legislation to try to suppress freedoms.

Even as the ICSW meeting takes place, rights organisations elsewhere have been issuing alarms about breaches of civic and media rights. Separately from the event in Belgrade, rights organisation PEN America on Apr. 9 warned that the “Trump administration’s targeting of journalists has reached a new level”.

The group pointed to reports from the U.S.-Mexico border (and leaked documents from a Department of Homeland Security whistle-blower) indicating that “U.S. government agencies have been tracking and monitoring over 50 individuals, mostly journalists and immigration advocates, as they report on the humanitarian situation” at the U.S. southern border.

Government entities have reportedly participated in the “tracking and monitoring of these journalists, including the creation of a U.S. government database containing sensitive personal information”, PEN America said. The group called the database “a shocking and unwarranted violation of journalists’ First Amendment rights” and “an appalling violation of press freedom”.

In France, meanwhile, the national branch of Amnesty International criticised a French “anti-riot” law that could threaten freedom of assembly and expression. The law, adopted by parliament, would allow police to systematically search protestors, and, despite certain assurances, it “remains a serious infringement on public freedom and the balance of power”, Amnesty France stated Apr. 9.

The law comes as France’s Gilets Jaunes (or Yellow Vests) continue their protests, with thousands marching on Apr. 6 in Paris and other cities for the 21st weekend in a row. Certain lawmakers say the legislation is necessary to prevent further destruction of property and life-threatening fires started by protestors during some of the demonstrations.

But France also uses other legislation “to target those defenders who are trying to help and rescue migrants coming to Europe via the Mediterranean sea,” said Forst, who is French.
“We’re seeing more and more the criminalisation of (rights) defenders”, through the use of the law, he said.

In Serbia, anti-government demonstrators are set to intensify their actions Apr. 13 — the day after ICSW 2019 ends — with what promises to be the biggest gathering since protests began last December.

Protestors are calling for free and fair elections and greater media freedom. (Last month some forced their way into the offices of Serbia’s state-run television network, to show dissatisfaction with what they called one-sided reporting.)

At the opening ceremony of ICSW, Serbian activists slammed President Aleksandar Vučić for repressive policies, often without naming him, and some called for protection of the media.

“We will stand up for freedom of journalists… the freedom not to be threatened in any way,” said Maja Stojanovic, of Serbian organisation Civic Initiatives, a co-host of the meeting.

Ahead of ICSW, Serbia was added to a watchlist of “nations where civic freedoms are under serious threat”. The watchlist – released by the CIVICUS Monitor, an online platform that tracks threats to civil society across the globe – said Serbian authorities have “orchestrated a smear campaign against demonstrators, labelling government opponents as ‘paid’ activists working against Serbian interests”.

The confused and disquieting developments in many countries further highlight the need to find cross-border solutions and to create links between rights defenders, Forst said.

The European Union, for instance, has guidelines for embassies of member states abroad on “how to protect rights defenders”, and funding is available for embassies to relocate individuals at risk, Forst told reporters. In addition, a network of shelter cities exists (the number of these is growing with continued attacks).

But it is difficult to relocate at-risk female activists who may have children, and here, too, there is often lack of cooperation or agreement on asylum requests.

While some countries can effectively help rights defenders in far-off regions, they seem powerless when it comes to their own neighbours.

Still, defenders are becoming “more efficient” in forming local, national and international networks, Forst said. “It is a battle … solidarity is important.”

He said the good news is that some countries that were “blocked in the past” are now granting access to international bodies to help protect defenders and to end impunity.

In contrast to states like the Philippines that are dangerous for rights defenders and don’t wish to “do anything to solve the problem”, other countries “like Mexico, Colombia, Honduras, Brazil now – maybe – do recognise, because of the number of killings … that they need to solve the problem,” Forst added.

In Brazil, meanwhile, activists and others are still asking: who killed Marielle Franco?