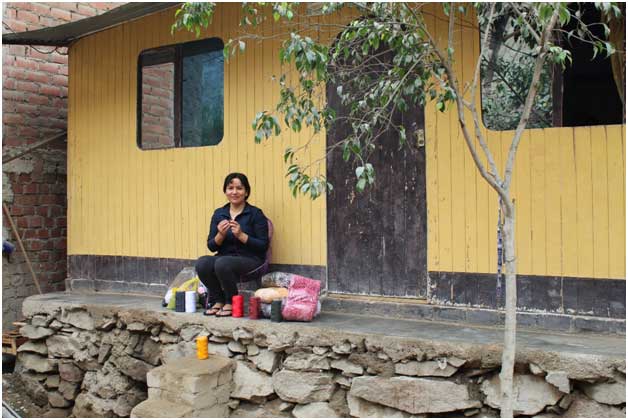 Elisa knitting outside her home.

MADRID, Spain, Jun 11 2019 (IPS) - This is the story of two women who are positively transforming social norms in their respective societies, as part of the global movement towards gender equality.

In Lima, Peru, Elisa Cuchupoma runs two livelihoods: one is selling knitted hair ornaments along with her group lending co-members, and the other is selling cuy (cavia porcellus), a guinea pig native to the Andean regions, raised for its meat.

She is part of the Palabra de Mujer group lending program of BBVA Microfinance Foundation (BBVAMF) in the country, which has reached more than 90,000 vulnerable women.

In La Vega, Dominican Republic, Benita Hernández tends a small-scale farm where she grows coffee, celery and sweet potato among other crops. Recently, she has also added macadamia nuts in her list of produce and has been receiving loans and technical assistance from the Foundation’s local institution.

This may not seem much at first glance, but in a region where women still face significant barriers to own productive properties and to independently access financing, Elisa and Benita join millions of women fighting for this and other rights that they are being denied.

Similarly, over 1.2 million women like them are taking part in this worldwide action, with the support of BBVAMF, through its six microfinance institutions (MFIs) in five countries in Latin America.

It is true that over the past decades in the Americas, the legal framework in politics, economics and in protecting women from gender violence has evolved positively. In fact, it is the second-best performer according to the OECD’s 2019 Social Institutions and Gender Index (SIGI) Report, which reflects women’s situation in 180 countries regarding discrimination in four dimensions: the family, restricted physical integrity, limited access to productive and financial resources, and restrained civil liberties.

None of its countries classify as having high or very high discrimination. Still, the SIGI’s latest edition1 confirms that to reach Sustainable Development Goal 5 (SDG 5): Gender Equality, the region has to address women’s lack of access to productive and financial resources.

This organization, together with the Ibero-American General Secretariat (SEGIB), confirms that adequate legislation is the first step towards gender equality, as it impacts women’s economic independence, without which, their progress and that of the whole region will never be optimized.

For instance, the SIGI shares that “nine countries have not implemented gender-sensitive measures to expand women’s access to formal financial services”. Consequently, their participation in the social and economic spheres is limited and their potential remains untapped. The report has identified that the region’s economic cost of gender inequality is USD 400 bn. Benita in her farm.

Likewise, it reveals that the family is the most difficult area of change, to the extent that Colombia is the only country with a law recognizing that women and men enjoy the same right to be head of household.

This means that as of this day, women’s voice and status within their home are subordinated to those of men. However, legal protection is insufficient when women’s own families continue to express negative attitudes about them or the projects they wish to undertake. Social norms and dynamics, based on practices, would have to undergo major transformations as well.

Accordingly, Elisa and Benita are not settling to be entrepreneurs with stable sources of income. Access to financial resources has enabled them to dream bigger and make their progress extensible to their households and communities.

In fact, BBVAMF’s own social performance assessment reveals that its female clients perform better than males: their earnings grow by 20% annually (versus 12% for businesses managed by male entrepreneurs), 37% of female clients overcome poverty in the second year with the Foundation, and although their exit to poverty is slower than that of their male counterpart, they experience a much lower relapse rate.

This is why it’s no surprise that, in their own way, these two women are also paving the road for change, so other women could enjoy the same rights as they do.

In Elisa’s case, her husband’s apprehension to apply for a loan deterred her from pushing her business plans forward. This went on until she learned about BBVAMF’s Peruvian MFI, where she was given a loan without her husband’s knowledge (since his collateral and signature were not required).

This then, became her gateway to economic independence, because aside from financial resources, her lending group (named “Neighbors united forever”) also receives training in financial and business management, and the members have become her second family who support her and encourage her to follow her ambitions.

In return, she has taught other female lending groups how to knit; expanding their skillset and making other entrepreneurial possibilities open to them. She now offers employment to 12 women of her community.

Benita, for her part, knows how lack of information has caused Dominican women to waive their right to be land proprietors, preventing them to accumulate assets and reduce their vulnerability. Indeed, the SIGI identifies “poor, less educated and rural women to be at higher risk due to intersectional discrimination.”

Without adequate knowledge about the requirements, and sometimes not even possessing the basic document of identification, they don’t stand a chance to be legal land owners. This widespread reality drove her to become part of the “Asociación Humanista de Campesinos” (Humanist Farmers’ Association) to help people fix their documentation requirements and afterwards aid them to obtain their land titles.

As the SIGI 2019 states, “social norms can be double-edged swords for women”: they can either hinder or act as catalysts for their progress. This is why the efforts of these two female entrepreneurs, along with those of other women, governments, the private sector, civil society, and other stakeholders are slowly taking the shape of a tool to eliminate discriminatory laws, social norms and practices.

Yet it must be maintained that transforming this social, cultural and historical machinery is a non-exclusive responsibility for women. The whole society- women and men, girls and boys must be engaged.

In this regard, SEGIB and BBVA Microfinance Foundation will jointly host the presentation of the SIGI 2019 in Madrid, Spain, on June 13th, as part of their commitment to drive changes that bring the world nearer to fulfilling SDG 5 and the 2030 Agenda. The gathering will take a broad look at the main conclusions of the report, after which the Latin American context will then be discussed, where Elisa and Benita will share their tales and make the reality of many others like them visible for the world to see: women who have to overcome social and economic barriers to find their way towards economic independence, and thus, contribute to achieving gender equality.

1 The SIGI looks at the gaps that legislation, social norms and practices create between men and women in terms of rights and opportunities. For more on methodology, refer to: http://bit.ly/2I2YDOw (p. 165)