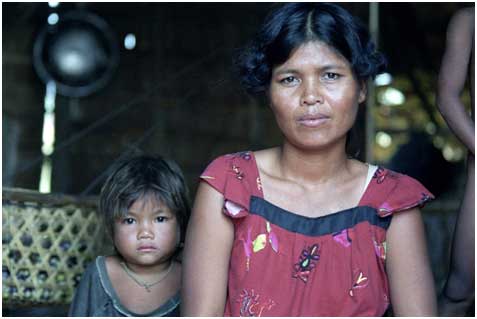 The meeting was organized by the Asian Population and Development Association (APDA) and hosted by the National Assembly of Laos.

It was a chance to push parliamentarians to continue developing programs to protect women. For the Members of Parliament (MPs) who participated, it was an opportunity to demonstrate how they are already increasing protections for women and girls who face physical and sexual violence, and to commit to doing even more for their security.

The discussions held by the APDA and participating organizations, (International Planned Parenthood Federation (IPPF), Plan International, and UN Women) focused on the specific challenges and progress made within the region.

“A majority of the countries in the region have laws in place criminalizing violence against women, including sexual violence,” Sujata Tuladhar, the Asia-Pacific Regional Gender-Based Violence Programme Specialist at the United Nations Population Fund, formally the United Nations Fund for Population Activities (UNFPA), told IPS.

The meeting covered topics such as ‘Where Are We Now? The Current Situation surrounding Women and Girls: Progress and Challenges in the Region,’ and ‘Gender and ICPD PoA: Empowering Women and Achieving Universal Access to Reproductive Health.’

The subjects under discussion also included the prevalence of violence and progress made in limiting that prevalence within the region.

The National Assembly hoped the meeting would give knowledge and voice to violence against women and girls. They note that “Parliamentarians play a lead role in advocacy, policy making, and monitoring in relation to the prevention of violence against women and girls and other women-related laws and policies in their countries. They can hold governments accountable for the implementation of laws and policies.”

A Cambodian Member of Parliament, Damry Ouk, told IPS the meeting was a place where Cambodia could “share with other countries about the empowerment of women [both in and outside of Cambodia].”

Ouk articulated that the particular focus for Cambodia was on “labor, education, the decision-making process (public service and political participation) and the rights-based approach that promotes choice and access to social services including institutional health deliveries.”

In Cambodia, the Law on the Prevention of Domestic Violence and the Protection of Victims (September 16, 2005), is meant to aid women who are victims of domestic violence.

It states that “Domestic violence is required to be prevented in time effectively and efficiently and that it is required to take the most appropriate measures in order to protect the victims or the persons who could be vulnerable.”

This includes sexual aggression, which involves: “Violent sex, Sexual harassment, and Indecent exposures.” A further explanation of sexual harassment or violent sex is not offered. Marital rape is not specifically referred to, though it may be included in violent sex.

According a report out of UNFPA in 2017, 33% of women in the region have experienced violence in the region of Kampong Cham, Cambodia.

The UNFPA and Cambodia have been working to combat this through the Partners for Prevention Regional Joint Programme that trains participants to share knowledge to caregivers and community members to prevent violence against women and girls.

But still, according to Tuladhar, not enough progress has been made in the Asia-Pacific region to combat violence against women and children.

“While most countries in the region prohibit domestic violence, many still do not include marital rape or violence by an unmarried intimate partner,” Tuladhar said.

She says that legislation in place to protect women in countries like Cambodia can be undermined by several factors including “limited awareness and knowledge of existing laws, barriers to reporting violence, bias, unresponsive or weak capacity among service providers (health, police, judiciary, shelter, psychosocial support providers), and legal systems and courts that are insensitive to the needs of survivors of violence.”

The UNFPA and participating countries are still working on the best way to prevent violence against women, and the meeting was only a continuation of efforts.

“The evidence base on what works to prevent different forms of violence against women is still evolving,” says Tuladhar, “UNFPA has initiated several programmes in the region to change these harmful social norms and promote healthier, happier and more equal and respectful relationships between men and women.”

She said UNFPA’s project Generation Breakthrough works with children aged 10-19 to promote healthy relationships and give children the tools to be knowledgeable about and have access to their reproductive health.

Drivers of violence against women (VAW) internationally are largely similar to those in the Asia-Pacific region.

Tuladhar sees the three main drivers as harmful social norms, toxic masculinity, and patriarchal societies, factors that most regions are not immune to.

Social norms in the Asia-Pacific region play a key role for the prevalence of violence against women in the region, and this role is changing.

The percentage of women who report experiencing physical/sexual violence from a partner varies widely across the region, being anywhere from 15% to 68%.

Tuladhar explains that “social norms that under pin and perpetuate this violence are embedded very early in life.”

She reports that the Partners for Prevention, a United Nations joint program on the prevention of violence against women, showed that “experiencing or witness violence in childhood and growing with and adopting inequitable gender norms, are among the key risk factors for men’s use of violence in adulthood.”

But Tuladhar says that the Asia-Pacific region faces even more trouble because it is so disaster prone.

“During emergencies, national systems and community and social networks weaken, increasing the risk of violence, exploitation and abuse – particularly for women and girls,” she said.

45% of the world’s natural hazards occur in the Asia-Pacific region. On top of this, the region is fraught with long-term conflicts that result in high levels of refugees.

Tuladhar says that for the Asia-Pacific region in particular, “all investments in addressing violence against women and girls need to ensure a resilience framework that makes the policies, provisions, systems and services adaptable to both humanitarian and non-humanitarian settings.”

For Cambodia, Ouk sees trafficking as a big problem still in need of being eliminated.

Ouk looks to the National Committee for Counter Trafficking in Person under the Ministry on Interior for prevention.

The goal there is “to collaborate together [with national and international non-governmental organizations] for combatting human trafficking in transparent, accountable and highly effective manner responding to the commitment of the Government to suppress trafficking in persons UNFPA remains focused on prevention and increased awareness,” she said.

The meeting in Laos was a reminder to parliamentarians across the Asia-Pacific region that despite progress, there is still a need to increase protections.

Moving forward, Tuladhar believes that action must take the form of “strengthen [ing] protection mechanisms for women and girls through improving quality and accessibility of services for violence against women survivors, while ensuring the survivor’s interest and wishes are the focus.”