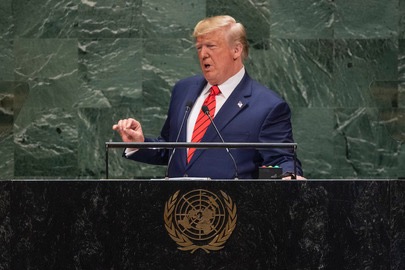 UNITED NATIONS, Sep 25 2019 (IPS) - The United Nations is an institution which promotes multilateralism and preaches some of the basic tenets of multiparty democracy and liberalism, including the rule of law, universal human rights, free speech, civil liberties, the rights of refugees and freedom of the press.

They have been best described either as rightwing nationalists, populist strongmen or authoritarian leaders—who, like Al-Sisi, presides over a repressive regime.

Martin S. Edwards, Associate Professor and Chair, School of Diplomacy and International Relations at Seton Hall University, told IPS, “I watched these speeches with students from several of these countries.  To be sure, the rhetoric can scare you.”

But these students were not scared, because of two things, he pointed out.

First, they know history. Just as President Trump spoke of national renewal, there is also a reformist tradition in the US as in other countries that practices a politics based on inclusion and not fear. These traditions haven’t gone away, and they will return, he said.

“The U.N. is tremendously popular across the globe, and they know that we can no more deny the necessity for international cooperation than we can deny the existence of gravity,” said Edwards, who is also director of the Center for U.N. and Global Governance Studies.

So, many called today—the opening day of the General Assembly sessions–“the day of populist strong men”. But their time won’t last, he predicted.

And it’s interesting to juxtapose their speeches with student activist Greta Thurnberg’s on the climate change crisis on Monday.

Secretary-General Antonio Guterres is banking on the optimists, and the rest of the week will be about their loud reply to today’s early speeches, Edwards said. 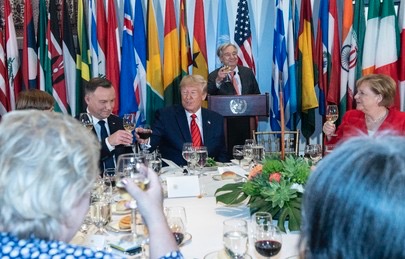 Abby Maxman, President of Oxfam America, was quick to point out that President Trump, once again, led with a tired, nationalistic foreign policy of fear and blame, “seeking to discredit and undermine the multilateral institutions and the international cooperation that is so critical to promoting our shared prosperity and security”.

She said that Trump restated his foreign policy’s central false premise: that necessary efforts to build a better, safer world are somehow a threat to Americans.

He pointed fingers at others for some of the biggest challenges, like the crises in Yemen and Syria, but took no responsibility for his administration’s role in fuelling them, and failed to commit to do his part to stop the violence and save lives.

“The challenges we are all facing – growing inequality, influx of forced migration, the climate crisis — are the same for families and countries around the world. At a time when all of us are worried about the future, we must work together to build and renew international cooperation – not tear it down.

“But as usual, President Trump’s rhetoric falsely pits Americans’ love of country and passion for our planet and all its people against our interests. It’s not a choice we have to make. We can, and must, choose both.”

Amnesty International came down heavily both on Bolsonaro and Al-Sisi, singling out Bolsonaro’s dangerous rhetoric at the General Assembly as a “blow to human rights”.

Jurema Werneck, executive director of Amnesty International Brazil, expressed concern over Bolsonaro’s statement about confronting the media and the work of the national and international press.

She said these are fundamental to the right to freedom of expression, due to their role in denouncing human rights violations and addressing other political, environmental, social and economic problems.

“Without freedom of expression, the promotion and protection of human rights would be in grave danger. The government must also respect the right of civil society to monitor, demand accountability and take action to promote and protect the rights of all people,” Werneck added.

Meanwhile, Amnesty International also called on world leaders to confront Egypt’s Al- Sisi and “utterly condemn the crackdown he has waged to counter the outbreak of protests in recent days”.

Amnesty said it has documented how the Egyptian security forces have carried out sweeping arrests of protesters, rounded up journalists, human rights lawyers, activists, protesters and political figures in a bid to silence critics and deter further protests from taking place.

The government has also added the BBC and Alhurra news to the list of 513 other websites already blocked in Egypt and disrupted online messaging applications to thwart further protests.

“The government of President Abdel Fattah al-Sisi is clearly shaken to its core by the outbreak of protests and has launched a full-throttle clampdown to crush demonstrations and intimidate activists, journalists and others into silence,” said Najia Bounaim, North Africa Campaigns Director at Amnesty International.

“The world must not stand silently by as President al-Sisi tramples all over Egyptians’ rights to peaceful protest and freedom of expression. Instead of escalating this repressive backlash, the Egyptian authorities must immediately release all those detained for peacefully exercising their rights to freedom of expression and assembly and allow further protests on Friday to go ahead.”

Amnesty International said it has documented the arrests of at least 59 people from five cities across Egypt during protests that took place on the nights of Sept. 20 and 21.

Local human rights organisations have reported hundreds of arrests all over Egypt. The Egyptian Center for Economic and Social Rights reported that 964 individuals have been arrested in relation to the protests between September 19 and 24.

In New York, President Al-Sisi responded to questions from the media claiming that the protests were instigated by “political Islam.”

However, Amnesty International said it found that, in fact, the protesters came from an extremely diverse range of age, socioeconomic, gender and religious backgrounds, including non-political backgrounds. All those detained faced the same “terrorism”- related charges.

In its 2018 World Report, Human Rights watch was strongly critical of the authoritarian tendencies of the Turkish government.

An April 2017 referendum, which voters approved by a slim margin, introduced constitutional amendments switching Turkey to a presidential system of governance, the most significant change to its political institutions in decades, said HRW.

The referendum took place under a state of emergency imposed after the July 15, 2016 attempted military coup, and in an environment of heavy media censorship, with many journalists and parliamentarians from the pro-Kurdish opposition in jail.

The new presidential system, which consolidates the incumbent’s hold on power, is a setback for human rights and the rule of law. It lacks sufficient checks and balances against abuse of executive power, greatly diminishing the powers of parliament, and consolidating presidential control over most judicial appointments. The presidential system will come fully into force following elections in 2019, according to the report.