DHAKA, Bangladesh, Dec 12 2019 (IPS) - When Feroza Begum was first diagnosed with leprosy in 2006, it felt as though she had been struck by a thunderbolt due to the deep-seated prejudice in her society that the disease is a curse from Allah (God).

“ I was affected with leprosy disease, nobody accepted me (in the past). They had made me isolated. I cannot forget the plight I suffered at that time. Even my family was broken as I was left by my husband,” she told IPS. The 35-year old says she was ostracized and made to feel like a lesser person.

Feroza travelled about 200 kilometres from Bogura district to Dhaka, the capital city to attend the first-ever Conference of organizations of persons affected by leprosy. Feroza came to listen and talk to other people who had similar stories and also to engage with organizations that are fighting for an end to discrimination of people with leprosy.

“I got married in 2006 and a few days later, I was diagnosed as a leprosy patient’. She says after the diagnosis, members of her husband’s family started ignoring her. ‘They ignored me and did not talk to me and one day sometime in 2007 my husband divorced me and sent me back to my father’s home.”

After returning home, she started treatment with support from a local NGO and she eventually recovered from the Hansen disease. But as a result of the disease, she could not avoid disability.

“Now my mother and I prepare mats and sell them in a local market. This is our only livelihood option but I never bow down to the stigma,” Feroza said.

Dr David Pahan, Country Director of Lepra Bangladesh, said Prime Minister Sheikh Hasina’s announcement of the ‘Zero Leprosy Initiative’ to eliminate the Hansen disease from the country by 2030 is commendable.

“Bringing leprosy patients into the mainstream of society is big for us as there is a negative perception about leprosy in our society,” he told IPS on the sidelines of the conference.

Now it is time for an Action Plan

Although the Zero Leprosy Initiative was announced, formulation of policies and action plans to eliminate leprosy is also a challenging task which lies ahead, he added.

Dr Pahan, who has been working on leprosy elimination since 1996, said leprosy patients must raise their voice together so that the authorities concerned take proper steps to bring them into the mainstream of society. 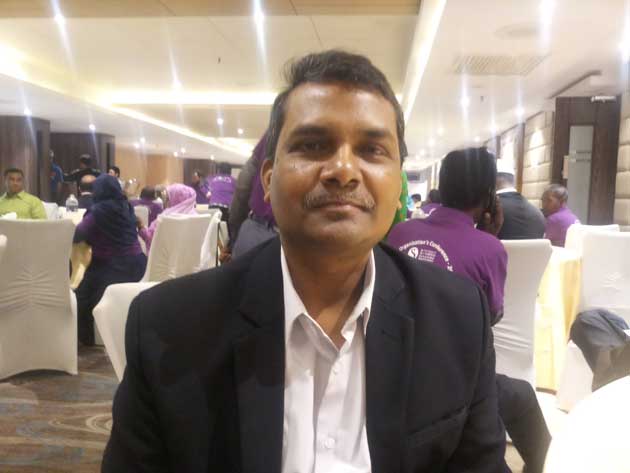 Close to 100 leprosy patients and representatives from several organizations working in the field of leprosy attended the landmark leprosy conference in Dhaka which was organized by members of the Lepra Bangladesh and TLM Bangladesh, with support from The Nippon Foundation and Sasakawa Health Foundation.

The conference allowed people from across the country to share their experiences about the long plight in the recovering period of the disease.

Sonia Prajapoti of HEED Bangladesh, a local NGO working on leprosy control, said the case of leprosy is highly prevalent among tea workers in Sylhet, Habiganj and Moulvibazar districts as they are not aware of the leprosy disease and have limited access to civic amenities.

She said a social awareness must be created among the tea workers to keep them free from leprosy, while the leprosy patients could be brought into the mainstream of society by increasing their social status, providing proper healthcare and creating working opportunities for them.

“Prime Minister Sheikh Hasina’s announcement of the ‘Zero Leprosy Initiative, will increase the voice of the people who have been working on leprosy elimination, and this will help them fight leprosy together,” said participant Shandha Mondal, district coordinator of local NGO Shalom (leprosy) in Meherpur.

Speaking as the chief guest at the conference, Chairman of The Nippon Foundation and WHO Goodwill Ambassador for Leprosy Elimination, Yohei Sasakawa, assured Bangladesh of continuing support of the implementation of ‘the Zero Leprosy Initiative’ which was announced by Prime Minister Sheikh Hasina and which aims to eliminate leprosy by 2030.

“The government has already announced the Zero Leprosy Initiative that will help eliminate the discrimination the leprosy patients have been facing,” he said.

“You, the leprosy patients, know better about the disease than doctors…your government is working to eliminate leprosy by 2030. And we are here to know how we can help your government fight leprosy,” Sasakawa said.