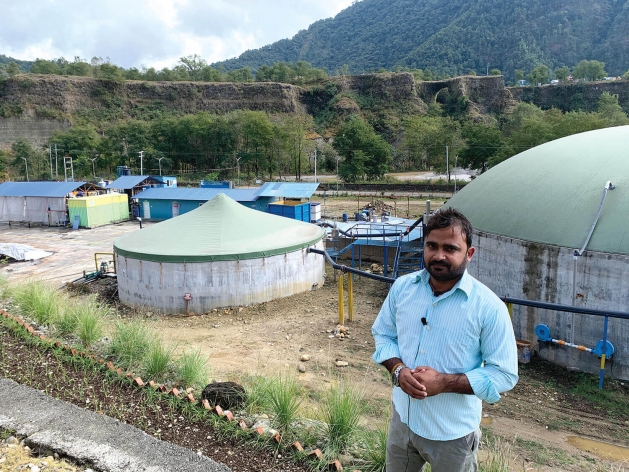 A company in Pokhara has enlarged household digesters into an industrial scale plant that uses climate-friendly technology that could ultimately be scaled nationwide to reduce Nepal’s balance of trade gap.

KASKI, Nepal, Jan 17 2020 (IPS) - Nepal’s future may not be in hydropower, as most assume, but actually in the dung heap. A new industrial-scale biogas plant near Pokhara has proved that livestock and farm waste producing flammable methane gas can replace imported LPG and chemical fertiliser.

Over the past 30 years, Nepal has become a world leader in spreading locally-designed household biogas digesters. There are now 300,000 of them, helping reduce deforestation, improving people’s health and lifting women out of drudgery and poverty.

Now, a company in Pokhara has enlarged household digesters into an industrial scale plant that uses climate-friendly technology that could ultimately be scaled nationwide to reduce Nepal’s balance of trade gap.

Biogas has a three-fold advantage. It reduces greenhouse gas emissions, and is therefore climate friendly. It allows us to manage raw waste. And it can slash our import bill for LPG and chemical fertiliser

Kushal Gurung’s grandfather was in the British Army, and he also applied for recruitment but failed the eyesight test. So, he set up Gandaki Urja in Pokhara that works with wind, solar and hydropower, but he believes Nepal’s best option for sustainable growth lies in energy from waste.

“Nepal must abandon fossil fuels, but even among renewable energy sources biogas has a three-fold advantage. It reduces greenhouse gas emissions, and is therefore climate friendly. It allows us to manage raw waste. And it can slash our import bill for LPG and chemical fertiliser,” says Gurung. “It is a win-win-win.”

A tipper truck has just arrived from Gorkha at Gandaki Urja’s biogas plant at Kotre near Pokhara, which with its dome digester looks like a nuclear reactor. The truck tilts its container to empty 5 tons of smelly poultry waste into a pit where rotting vegetables and cow dung from a farm in Syangja are all being mixed before being fed into the 4,000 cubic meter digester that is kept inflated.

In the absence of oxygen, bacteria already in the cow dung go to work to break down the waste into methane, carbon dioxide and hydrogen sulphide. The impurities are removed by filters to produce 200 cylinders of bio-CNG a day which are sold to big hotels and restaurants in Pokhara.

Customers pay a deposit for the cylinders and pressure regulators, and usually use up about two cylinders a day. The cost per kg for the bio-Compressed Natural Gas (bio-CNG) is the same as the state subsidised Liquified Petroleum Gas (LPG). However, customers prefer the biogas because it saves them up to 30% cost because it has higher calorific value than LPG, and there is no residue that goes waste.

“So far, the customers are satisfied, and we see demand growing in the future as word spreads,” says Ashim Kayastha, Director of Gandaki Urja.

Half the plant’s revenue comes from bio-CNG and the other half from the effluent which is dried and sold as organic fertiliser. The plant can produce up to 11,000 tons of fertiliser a year and is sold to surrounding farms.

The future of bio-CNG depends on scaling up the technology since any municipality generating more than 40 tons of biodegradable waste per day could have its own biogas plant. Nepal imports 500,000 tons of chemical fertiliser a year, and if each of 100 municipalities produced 5,000 tons of organic fertiliser Nepal could slash its import bill.

This could also significantly reduce the country’s annual import of Rs33 billion worth of LPG from India which grew four-fold in the past 10 years, making up 2.5% of Nepal’s total import bill. But to scale up, industrial biogas needs the same government incentives as hydro, solar and wind power.

At the moment hydropower investors enjoy a 100% corporate tax holiday for 10 years, and 50% for the next five years. There is only 1% tax on imports of equipment for solar, wind and hydropower, there is no such provision for the equipment for industrial scale biogas. Instead, there is a tax on interest, and also VAT on bio-CNG.

“The government should look at this not only as an energy project, but at its multifaceted benefits,” says Kushal Gurung of Gandaki Urja. “There is a waste-to-energy and fertiliser angle, too. If we want to make Nepal fully organic in the next ten years, projects like these need to be prioritised.”

Gandaki Urja got a boost from an unlikely source, Business Oxygen (BO2) in Kathmandu which helps entrepreneurs running Small and Medium Enterprises (SMEs) to scale up by injecting equity and providing technical assistance.

Says Siddhant Pandey of BO2: “We are always on the lookout for climate investments, and we realised that bio-CNG would be an incredible adaptive resilience investment. It would displace imports of LPG and fertiliser. It was going to be clean, no carbon footprint, and it made business sense because it met our internal return on investment expectation.”

The challenges are ensuring reliable sources of raw material and building knowhow for the technology within Nepal.

Says Pandey: “The Pokhara plant is a drop in the ocean, it can abe replicated in all 7 provinces. We know it is scalable, and it depends how proactive provincial governments will be.”