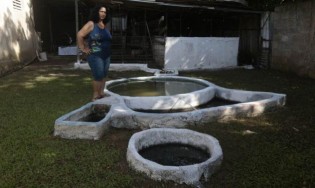 By Kunda Dixit
Nepal’s future may not be in hydropower, as most assume, but actually in the dung heap. A new industrial-scale biogas plant near Pokhara has proved that livestock and farm waste producing flammable methane gas can replace imported LPG and chemical fertiliser.

By Mario Osava
Biogas has the potential to provide 36 percent of the electricity consumed in Brazil or replace 70 percent of diesel if purified as biomethane, according to the Brazilian Association of Biogas and Biomethane (Abiogas).

By Mario Osava
“We want to make history," agreed the teachers at the Chiquinho Cartaxo Comprehensive Technical Citizen School. They are the first to teach adolescents about generating power from bad weather in the semi-arid Northeast region of Brazil.
Next Page »
ADVERTISEMENT ADVERTISEMENT