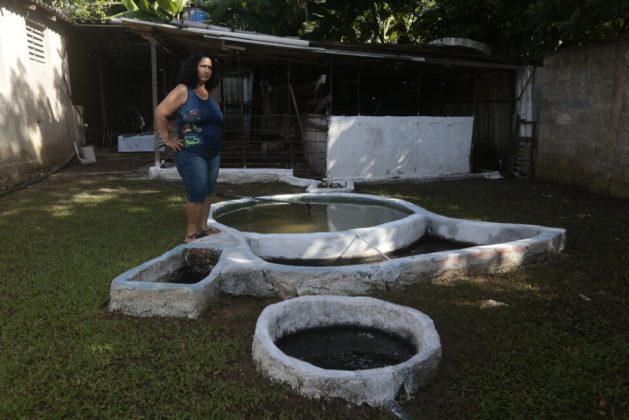 Farmer Mayra Rojas says that the Chinese-type fixed-dome biodigester built in back of her home in Carambola, in the municipality of Candelaria in western Cuba, has become part of her daily life and a key factor in improving her family's quality of life. CREDIT: Jorge Luis Baños/IPS

HAVANA, Aug 2 2022 (IPS) - Standing in front of a blue flame on her stove, getting ready to brew coffee, Mayra Rojas says the biodigester built in the backyard of her home in western Cuba has become a key part of her daily life and a pillar of her family’s well-being.

“Biogas is a blessing,” says Rojas, a farmer who lives in the rural community of Carambola, in the municipality of Candelaria, located about 80 kilometers from Havana in the western province of Artemisa.

A pioneer in the use of this form of renewable energy in her town, she explains that with biogas “I spend less time cooking and pay less for electricity,” while the savings have enabled the gradual upgrade of her old wooden house to a more solid cinderblock structure.

In addition, “it doesn’t blacken the pots, like when I used firewood. And now I get my nails done and they last, as does my hair after I wash it,” says the environmental activist who raises awareness about caring for nature among elementary school children, in an interview with IPS at her farm.

She also specifies that greater support from her husband and two children in household chores, cleaning the yard and taking care of the animals on the family farm, “and greater awareness of environmental care,” are other benefits brought about by the use of this alternative energy.

In fact, it was her husband, Edegni Puche, who built the biodigester, for which the family put up part of the cost, while receiving contributions from the municipal government and the local pig farm company.

At the back of the house are the pigsties where they raise pigs, as well as fruit and ornamental trees, while on an adjoining lot Rojas is setting up an organoponic garden, where she will grow different vegetables.

As she pours the freshly brewed coffee, she says that “before, when the pens were cleaned, the manure, urine and waste from the pigs’ food accumulated in the open air, in a corner of the yard. It stank and there were a lot of flies.”

But in 2011 she learned about the potential of biodigesters, where organic matter is decomposed anaerobically by bacteria, but in a closed, non-polluting environment that provides gas as an energy resource.

Training workshops and advice from specialists from the Cuban Society for the Promotion of Renewable Energy Sources and Respect for the Environment (Cubasolar) and the Movement of Biogas Users (MUB) encouraged people to build biodigesters, Rojas said.

Founded in 1983, MUB brings together some 3,000 farmers who use the technology in this Caribbean island nation of 11.1 million inhabitants.

An incentive to expand biogas in Cuba was provided by the international Biomas-Cuba project, which began in 2009 and is due to finish this year, focused on helping to understand the importance of renewable energy sources in rural environments, the role of biodigesters on farms and in waste treatment systems on pig farms, among other objectives.

With funding from the Swiss Agency for Development and Cooperation (Cosude), the initiative is coordinated by the Indio Hatuey Experimental Station, a research center attached to the University of Matanzas in western Cuba, and involves related institutions in several of the country’s 15 provinces. 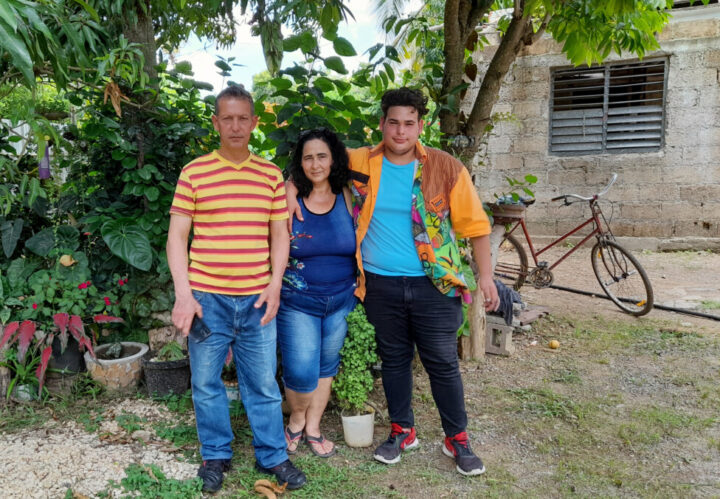 Mayra Rojas, her husband Edegni Puche and the couple’s youngest son stand in the backyard of their home. Family support for household chores, cleaning the yard and caring for the family’s animales, along with increased awareness of environmental care are other benefits that the biodigester has brought to the life of this rural Cuban woman. CREDIT: Jorge Luis Baños/IPS

Methane, from enemy to ally

Experts agree that the proper management of biological methane resulting from the decomposition of agricultural waste and livestock manure can generate value and be a cost-effective solution to prevent water and soil contamination.

As a potent greenhouse gas, methane has 80 times the warming power of carbon dioxide, according to studies.

Therefore, its extraction and use as energy, especially in rural and peri-urban environments, can be a solution for reducing electricity consumption and for helping to combat climate change.

More than 90 percent of Cuba’s electricity generation is obtained by burning fossil fuels in aging thermoelectric plants and diesel and fuel oil engines, which pollute the air and contribute to global warming.

There are an estimated 5,000 biodigesters in Cuba, in a nation where a significant percentage of the 3.9 million homes use electricity as the main energy source for cooking and heating water for bathing.

“We have to make people more aware that the biodigester not only protects the environment and provides energy, but also brings savings, because the manure that is not used is money that is thrown away,” says Rojas.

It also provides biol and biosol, liquid effluent and sludge, respectively – end products of biogas technology that are rich in nutrients, ideal for fertilizing and restoring soils, “as well as watering and keeping plants green,” says Rojas as she proudly shows the varieties of orchids in her leafy yard.

Her biodigester has also proven its usefulness to the community, because when there are blackouts due to tropical cyclones that frequently affect the island, “neighbors have come to heat up water and cook their food,” she adds. 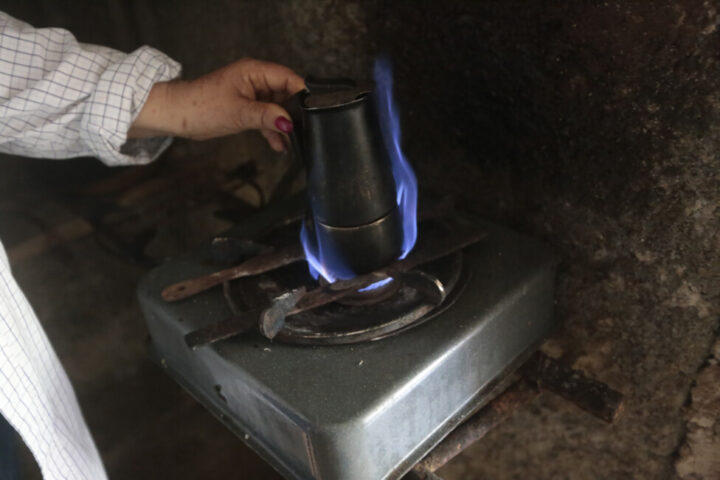 Mayra Rojas turns on biogas on her small stove to brew coffee in her home in the rural community of Carambola, in the municipality of Candelaria, in the western Cuban province of Artemisa. She says that with this clean energy source she spends less time cooking and saves electricity. CREDIT: Jorge Luis Baños/IPS

Rojas says that a major impediment to the spread of biodigesters in local communities and the country is the island’s economy, whose three-decade crisis was aggravated by the COVID pandemic and the tightening of the U.S. embargo.

The decapitalization of the main industries and financial problems are major factors in the low levels of production of cement, steel bars, sand and other elements used to make biodigesters, which are also necessary to reduce the high housing deficit and fix the portion of homes that are in poor condition.

The availability of manure is another stumbling block with a deficient pig and cattle herd, which will have to wait for the most recent government measures aimed at stimulating their growth and balancing it with domestic demand for meat to take effect.

“I received the support of the municipal government, the local pig company, plus the technical advice from Cubasolar” to build the six-cubic-meter Chinese-type fixed dome biodigester, explains Rojas. “But not all families have enough animals or can afford to build one.”

Perhaps that is why in Carambola it is only possible to find five biodigesters in a community of about 120 homes and 400 local residents, she added.

“Building a biodigester has become too expensive,” acknowledged Lázaro Vázquez, coordinator of Cubasolar in San Cristóbal, a municipality adjacent to Candelaria, who provided advice for the construction of the one on the Rojas farm, which is considered small-scale (up to 24 cubic meters per day).

Although costs depend on factors such as the size, type and thickness of the material, and even the characteristics of the site, specialists estimate that the average minimum cost for the construction of a small-scale biodigester cooker for household use is around 1,000 dollars, in a country with an average monthly salary of about 160 dollars at the official exchange rate.

Vázquez told IPS that low-interest loans should be made available, because “it will always be more economical to make biodigesters using domestic products.”

He pointed out that in Cuba “there is potential” to expand the network of biodigesters, which could reach 20,000 units, at least small-scale ones, according to conservative estimates by experts. 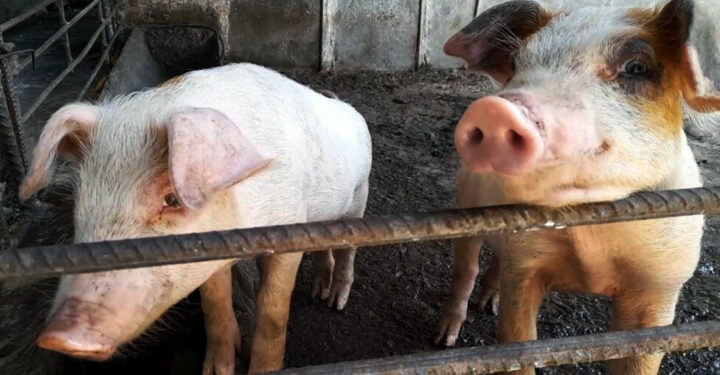 Two pigs stand in a pen built next to the biodigester in the backyard of the home of farmer Mayra Rojas. Experts agree that proper management of the biomethane resulting from the decomposition of agricultural waste and livestock manure can generate value and be a profitable solution to prevent water and soil contamination in Cuba. CREDIT: Jorge Luis Baños/IPS

During a Jul. 21 session of Cuba’s single-chamber parliament, economic stimulus measures were announced, including an aim to increase the production and use of biofuels and biogas.

“Although it can be used in transportation…the main benefit of the biodigester is environmental and the efficiency of biogas lies in its final use,” José Antonio Guardado, a member of Cubasolar’s National Board of Directors and coordinator of MUB, explained to IPS.

In this regard, Guardado reflected that the direct use of biogas for cooking is much more efficient than if it is transformed into electrical energy or used to power a vehicle.

The head of MUB recommended “understanding the value of biogas technology in a comprehensive manner, taking advantage of all of its end products. This includes the supply of basic nutrients for soil fertilization that has a direct impact on food production.”

This would contribute to the closing of cycles of the circular economy, based on the principles of reduce, recycle, reuse, which promotes the use of green energies and diversification of production to achieve resilience.

“Evidently this final product, from biogas technology, will only be achievable locally, with the participation of all the actors of the Cuban economy, and social inclusion,” Guardado said.

Ministerial Order 395, issued in 2021 by the Ministry of Energy and Mines, stipulated that each of Cuba’s 168 municipalities must have a biogas development program and strategy, and must coordinate their management and implementation with their respective provinces.

The appointment of a government official to head the commission, to prioritize the allocation of materials to build biodigesters, seems to confirm the authorities’ decision to promote sustainable energy development from the local level.