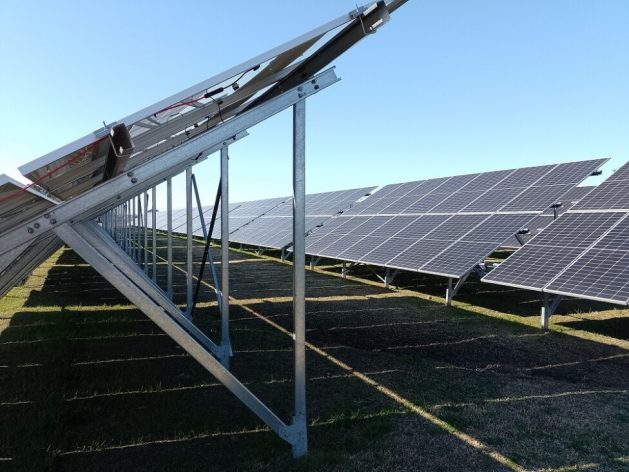 View of the solar park in the municipality of Escobar, located an hour's drive from Buenos Aires. Inaugurated this month, it is the first municipally financed and managed solar energy project, at a time when private investment has withdrawn from large clean energy projects in Argentina. CREDIT: Daniel Gutman/IPS

ESCOBAR, Argentina, Jul 18 2022 (IPS) - The multitude of solar panels stands out along a dirt road in an unpopulated area. Although located just an hour’s drive from Buenos Aires, the new solar park in the municipality of Escobar is in a place of silence and solitude, symbolic of the difficulties faced by renewable energies in making inroads in Argentina.

The Escobar plant, inaugurated this month, is the first solar energy park with municipal investment and management, at a time when private initiative has practically withdrawn from clean energy projects in this South American country of 47 million people, which has been in the grip of a deep economic and financial crisis for years.

“There are 3,700 photovoltaic solar panels that produce electricity to be sold to one of the electric cooperatives that distributes power in the area. With this plant, we seek to position ourselves as a sustainable municipality and access financing for new projects,” Victoria Bandín, director of Innovation in the Municipality of Escobar, told IPS during a tour of the grounds of the six-hectare park.

Located 50 kilometers from the Argentine capital, to which it is connected by a freeway, Escobar is a municipality on the northern edge of Greater Buenos Aires, a gigantic metropolitan area of 15 million inhabitants where the country’s greatest wealth and poverty live side by side.

Escobar’s extensive green areas have attracted thousands of families in recent years seeking to get away from the cement and noise of Buenos Aires, which has fuelled the construction of dozens of upscale high-security private housing developments.

Escobar is also home to a large community of Bolivian immigrants, who play a key role in the production of fruits and vegetables. In fact, the fresh food market that supplies the stores of several municipalities in the area bears the name “Bolivian Community”.

Next to the market, which is very close to the solar park, the white, inflated tarp of a biodigester, in which the market’s organic waste is processed, stands out. 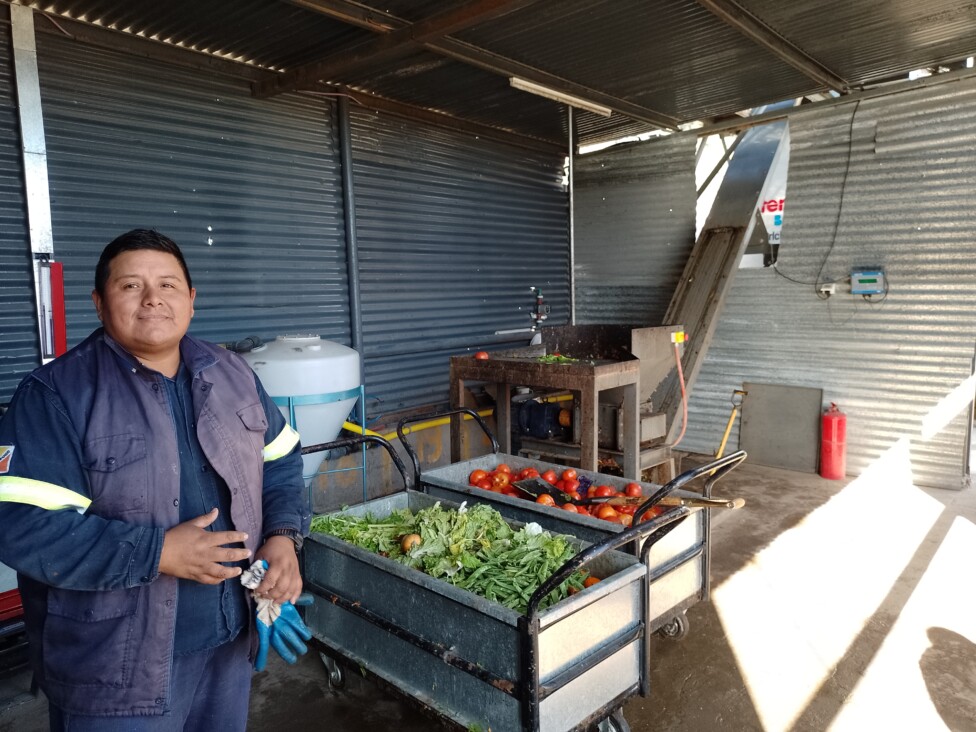 Eliseo Acchura is about to send spoiled food discarded by stallholders to the biodigester at Escobar’s fruit and vegetable market. The biodigester, operating since last year, produces biogas that is then converted into electricity used in the market. CREDIT: Daniel Gutman/IPS

“I pick up almost a ton of fruit and vegetables per day that the stallholders discard, and after 40 to 60 days of decomposition in the biodigester, we have biogas,” Eliseo Acchura, who works on the project inaugurated last year with support from the United Nations Development Program (UNDP), told IPS.

The biogas is used to generate electricity to supply part of the market.

“We have rural areas and we seek to preserve ourselves as a green place on the edge of the great gray blob that is the greater metropolitan area,” Guillermo Bochatón, coordinator of the Sustainable Escobar program, which is carrying out several environmental initiatives, told IPS.

The rise and fall of renewables

Clean energies experienced a boom in Argentina starting in 2016, thanks to the Renovar Program, which managed to attract domestic and foreign private investors.

Through this program, the national government guaranteed the purchase of electricity for 20 years at a fixed rate in dollars and created a guaranty fund with the participation of international credit institutions to guarantee payment.

The share of renewable sources in the total electricity mix, almost non-existent in 2015, grew significantly since 2016, reaching a record high of 13 percent on average in 2021.

Today, Argentina’s electricity system has an installed capacity of almost 43,000 MW, of which 5,175 MW are renewable. The main source of generation is thermal (powered by natural gas and, to a lesser extent, oil) making up 59 percent of the total, followed by large hydroelectric projects, which make up 25 percent (only hydroelectric projects of less than 50 MW are considered renewable).

Of the 189 renewable energy projects in operation, 133 were commissioned over the last four years. 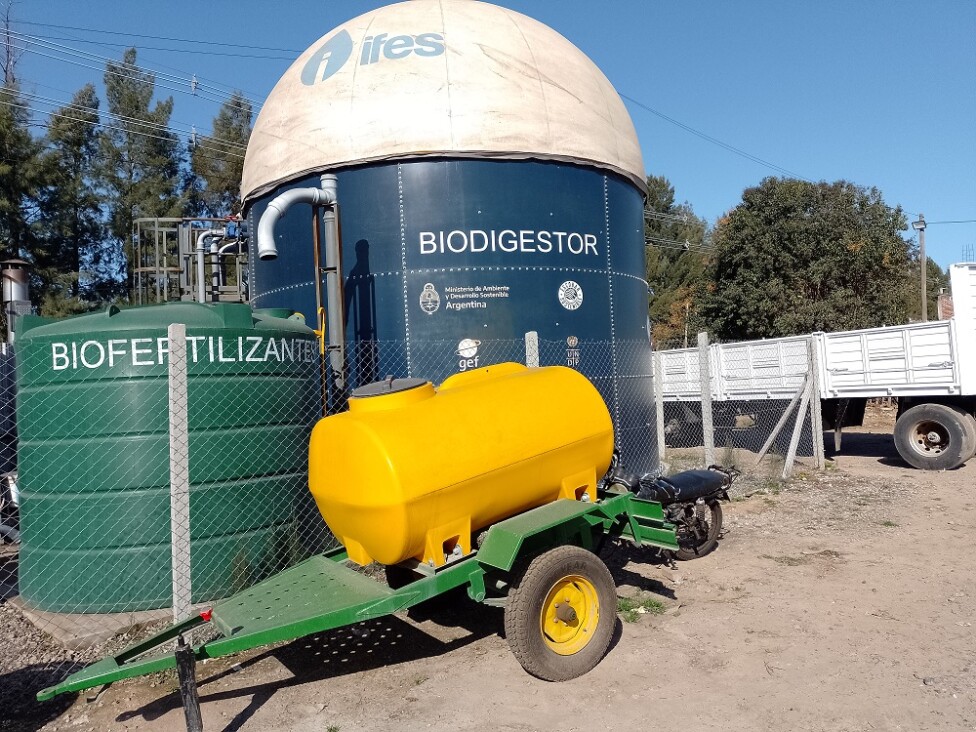 The biodigester at Escobar’s wholesale fruit market was inaugurated last year and is part of the environmentally friendly initiatives launched in this municipality near the Argentine capital. CREDIT: Daniel Gutman/IPS

Clean energies today face two major problems in this country, according to Marcelo Alvarez, a member of the board of directors of the Argentine Chamber of Renewable Energies (CADER).

One has to do with infrastructure due to the saturation of the electricity transmission networks that deliver electric power to large cities. Another is the lack of financing, as a result of the macroeconomic conditions in the country.

“Even private ventures in distributed generation today are practically reserved only for environmental activists, because the lack of financing and extremely low electricity rates make them unprofitable,” Alvarez explained.

He said that the way things are going, the country is not likely to meet the goal set by law in 2015, for 20 percent of the national electricity mix to come from domestic sources by 2025.

“From a technical point of view, Argentina’s potential for renewable energies is enormous, because it has the necessary natural resources. And economically too, because in the medium term the costs of electricity production will fall,” Gabriel Blanco, a specialist in renewable energies from the National University of the Center of the Province of Buenos Aires (UNICEN), told Ecoamericas.

“The main obstacle is that there is no political will, because the decision is to bet on the energy business of fossil fuels, large hydroelectric and nuclear power plants,” he added.

The Escobar solar park has an installed capacity of 2.3 MW and required an investment of some two million dollars, which will be recovered with the sale of electricity within seven years, said the mayor of Escobar, Ariel Sujarchuk. “Between 23 and 53 more years of useful life of pure profit will be left after that,” he added.

The inauguration was also attended by Environment Minister Juan Cabandié, who pledged more than 1.7 million dollars in government funds for the expansion of the solar park, which has a large piece of land available for the installation of more panels.

In his speech in Escobar, Cabandié criticized industrialized countries for failing to comply with the financing needed to transform the economies of developing countries, as pledged under the Paris Agreement on climate change, adopted in the French capital in 2015.