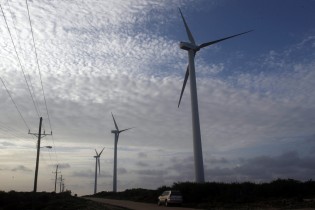 By Daniel Gutman
The Argentine population can now generate their own energy through clean and unconventional sources and incorporate surpluses into the public grid, thanks to a new law. This is an important novelty in a country embarked on a slow and difficult process, with a still uncertain end, to replace fossil fuels.

By Orlando Milesi
Chile, Latin America’s leader in solar energy, is starting the new year with an innovative step: the development of the country´s first citizens solar power plant.

By Catherine Wilson
Waves are ubiquitous in the more than 20 island states scattered across 165 million square kilometres of the Pacific Ocean. But only this year, following a ground-breaking study by oceanographic experts, are they now seen as an economically viable source of renewable energy in the region.

By Marianela Jarroud
Chile expects to have a more efficient and stable electricity market, with a more steady - and above all, less expensive – supply, when the country’s two major power grids are interconnected over a distance of more than 3,000 km.

By Diego Arguedas Ortiz
Costa Rica has almost reached its goal of an energy mix based solely on renewable sources, harnessing solar, wind and geothermal power, as well as the energy of the country’s rivers.
Next Page »
ADVERTISEMENT ADVERTISEMENT