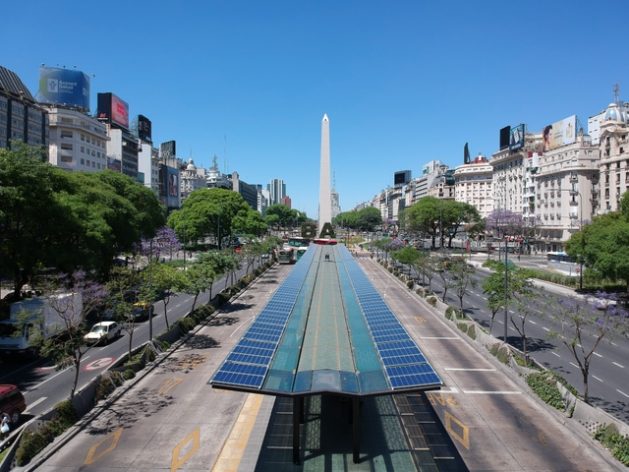 Solar panels installed on covered bus stops of the public transport system in the city of Buenos Aires, on the 9 de Julio Avenue, with the emblematic obelisk in the background. Clean and unconventional energies comprise a negligible share of Argentina's energy mix, but different government initiatives seek to change this. Credit: Courtesy of Sustentator

BUENOS AIRES, Feb 24 2018 (IPS) - The Argentine population can now generate their own energy through clean and unconventional sources and incorporate surpluses into the public grid, thanks to a new law. This is an important novelty in a country embarked on a slow and difficult process, with a still uncertain end, to replace fossil fuels.

The law, passed by Congress in November, was promulgated in December by President Mauricio Macri, who declared 2017 the “year of renewable energies”, in an initiative that as yet has no concrete results to show.

The new law was born with the aim of fomenting the generation and incorporation in the grid of clean and unconventional energy by many small nearby sources, citizens and other private actors, in what is known as distributed, dispersed or decentralised generation.

“There are still many unknowns about whether the distributed generation law will be effective. The essential thing is to see what decisions the government takes this year in terms of incentives,” industrial engineer Rodrigo Herrera Vegas told IPS, who in 2009 founded one of the pioneer clean energy companies in the country.

“Distributed energy is a change of paradigm in energy production, which can be important for Argentina. The time of the passive user, who consumes and pays the energy bill, has ended, because that is no longer efficient." -- Juan Bosch

“Renewable energy equipment is not manufactured here and it pays very high import duties. So for someone who lives in Argentina it is too expensive today to buy solar panels, for example. It would take 12 or 13 years to recover the investment,” he added.

Argentina has had a hard time shifting to renewable power sources. They still represent a negligible share of the electric grid, which is made up of 64 percent thermal power plants fueled by oil or gas, 30 percent large hydroelectric plants, and four percent nuclear power plants, according to official data.

The good news is that, after the absolute failure of two laws creating incentives for renewable projects passed by the legislature in 2001 and 2006, for economic reasons, a third law approved in 2015 seems to be definitive.

Thanks to this law, between 2016 and 2017, the government held tenders and signed contracts with private investors for the construction of 147 renewable energy undertakings, with a total capacity of 4,466 megawatts (MW), in 22 of the country’s 23 provinces. The vast majority of these projects involve wind (2,466 MW) and solar (1,732 MW) power.

These facilities are expected to become operational in the next few years, which would be an important contribution to an electrical grid which today, with an installed capacity of around 30,000 MW, is already at its limit or does not meet demand, particularly on the hottest days of summer, when high consumption often causes power cuts in large cities.

According to the latest official data released, between March and August, months with relatively low electricity consumption, the inhabitants of Buenos Aires spent almost 16 hours without electricity on average.

Citizen-generated energy is added to the equation

“Distributed energy is a change of paradigm in energy production, which can be important for Argentina. The time of the passive user, who consumes and pays the energy bill, has ended, because that is no longer efficient,” said Juan Bosch, a lawyer who specialises in energy issues, who is also the president of SAESA, a company dedicated to unconventional energy and natural gas.

“Generation through large power plants in this country exceeds the transmission capacity at times of peak consumption, and that’s when production by private homes can make a difference, since energy is produced where it is consumed,” he told IPS.

The law aimed at “Fomenting Distributed Generation of Renewable Energy Integrated in the Public Power Grid” establishes the following goals: “energy efficiency, the reduction of losses in the grid, the potential reduction of costs for the electrical grid as a whole, environmental protection provided for in the National Constitution, and the protection of the rights of users in terms of equity and non-discrimination.”

It also requires that power companies “facilitate the injection” into the grid of surpluses that individual consumers may generate, and it prohibits companies from making any additional charge for doing so.

In any case, whoever adds energy to the grid will not obtain money for the energy they sell, but will be instead compensated by the company with discounts in subsequent billings.

Regarding the most critical issue in the implementation of the distributed energy system, which is how to make it economically attractive for users, the law creates a public fund to encourage its development, which the government is to set up with about 95 million dollars of its own funds.

For Juan Carlos Villalonga, a member of the lower house of Congress for the governing alliance Cambiemos who helped draft the law, “the first ones that are going to take advantage of this possibility in Argentina are productive undertakings, which have money to invest, and in many parts of the country today receive an electric service that is expensive and bad.”

Villalonga acknowledged to IPS that it will take a long time for residential users in Argentina to begin producing their own energy.

“They will do it when the prices of the necessary equipment are driven down, through different tools the State has to achieve this, such as increasing the price at which the energy generated by a user is purchased, or giving access to better financing,” he said.

The crisis affecting the energy sector has been recognised by the government.

According to data from the Ministry of Energy and Mining, on the coldest days of the Southern Cone winter, when residential heating systems drive up consumption of natural gas, up to 30 percent of the natural gas consumed is imported.

In the summer, when electricity consumption rises due to air conditioning, this South American country of 44 million people buys up to 10 percent of the energy used from its neighbours Brazil, Paraguay and Uruguay.

The government said it intends to raise the installed capacity of the electric system from the current 30,000 MW to 50,000 MW by 2025, of which 11,500 should come from renewable sources.

The goal for eight percent of electricity to come from renewable sources by December 31, 2017, as set by the law currently in force, was not met.

However, the second goal established by the law – to cover 25 percent of demand with renewables by 2025 – is expected to be achieved.

The figurehead of the dream of unconventional clean energy is the enormous Cauchari solar energy park which began to be built last year in the northwest province of Salta, and which will provide 300 MW.

China is playing a leading role in the project, financing more than 80 percent of a total budget of 390 million dollars. And the 1,200,000 solar panels that are being installed on 700 hectares of land were manufactured in the Asian giant.

The land on which the plant is being built belongs to an indigenous community, which was promised two percent of the profits.