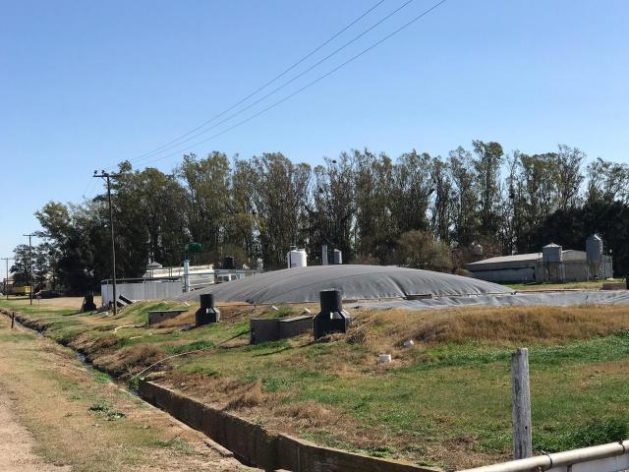 The biodigester of the Monje Agricultural and Livestock Cooperative, which brings together 550 small farmers in this town in northeastern Argentina on the banks of the Paraná River, produces biogas that feeds electricity to its oil plant and biofertilisers used on the crops. CREDIT: Courtesy of CopMonje

BUENOS AIRES, May 11 2021 (IPS) - “Until five years ago, we didn’t know about the circular economy, but today our waste generates environmentally neutral products that also offer a return,” says José Luis Barrinat, manager of a cooperative that brings together some 550 small farmers in Monje, Argentina.

Their story reflects a reality that has begun to spread in recent years in the rural areas of this South American country, a traditional powerhouse in food production. Today both small farmers and large agribusiness companies generate energy and other products from what was once considered waste and was solely an environmental problem.

The Monje Agricultural and Livestock Cooperative is located 370 km north of Buenos Aires, in the northeastern province of Santa Fe, and has a pig farm of some 200 sows which sells some 90 animals each week, Barrinat told IPS by telephone from his home town.

“Farmers are beginning to realise that livestock production effluent is not a waste product but a raw material that can generate value, and that an environmental problem can become a profitable solution." -- Diego Barreiro

Until recently, the manure was collected in large open ponds, which were a major emitter of methane, one of the main greenhouse gases (GHG) contributing to global warming, into the atmosphere.

Everything changed, however, with the 2018 inauguration of a biodigester, where effluent from the pig farm are now treated together with other organic waste, such as decomposing grains.

The biodigester replicates nature by converting organic matter into energy using bacteria that carry out an anaerobic degradation process.

The biodigester in Monje is made up of a large tank with waterproofed walls covered by a canvas reinforced with rubber that seals it hermetically, into which the effluent from agricultural activities runs through channels.

Barrinat explained that the resulting biogas has two uses: “We use it as fuel for an electric generator, which covers part of the consumption of our oil plant, and also for a grain dryer that we use when the harvest is wet. We also extract biofertilisers, which we use on our 35-hectare field.”

Building the biodigester cost nearly 100,000 dollars and was made possible thanks to a grant from the United Nations Food and Agriculture Organisation (FAO) and advice from Argentina’s governmental National Institute of Agricultural Technology (INTA).

“The use of biogas has grown enormously since 2015 in this country, alongside research and the creation of knowledge,” said Jorge Hilbert, an international advisor at INTA. “Unfortunately, this came to a halt in the last two years, due to the financing difficulties that Argentina is experiencing,” he added, speaking to IPS in the capital.

In Cristophersen, a town in northeastern Argentina, biodigesters were built by Adecoagro, an agroindustrial company that invested six million dollars to produce biogas from the manure of 12,000 cows. Adecoagro has been selling renewable energy to the national electricity grid for more than three years. CREDIT: Courtesy of Adecoagro

Hilbert coordinates the Global Digital Biogas Cooperation project in the country, which last year investigated market conditions in Argentina, Ethiopia, Ghana, Indonesia and South Africa. The initiative was financed by the European Union, which is interested in exporting its biogas technology to emerging countries.

In the case of Argentina, the study noted that there are 100 biogas plants in operation and that the main potential for this renewable energy lies in the effluent from pork and beef production and the dairy industry.

Biogas generation received a boost in 2015, when the Law for the Promotion of Renewable Energies was passed. The following year the government launched the RenovAr Programme, by which the State guarantees the purchase of electricity generated with non-fossil fuel sources.

Environmental engineer Mariano Butti, an INTA researcher in the city of Pergamino, told IPS that thanks to RenovAr, 36 large-scale biogas plants have been built or are under construction, which inject energy into the national power grid.

However, Butti said by telephone from that city, located some 220 km from the capital, that there is still a long way to go, especially for medium and small farmers.

“The benefit of biodigesters is twofold, because they generate biofertilisers that replace chemical, fossil-based fertilisers, and because they cut GHG emissions from untreated effluent,” he said.

“Today in Argentina we are wasting a resource,” added Butti, who cited concrete examples, such as Navarro, an agricultural municipality located 120 km from Buenos Aires.

The expert explained that “Navarro has 20,000 inhabitants and 180 cattle farms, with a total of 38,000 cows. Today, they generate local electricity with two diesel engines and dump the effluent from livestock into a river, instead of making use of it.”

However, developing the potential of agricultural waste in Argentina is not an easy task.

In 2018, INTA developed a project for Chañar Ladeado, a town of 6,000 people, also in the northeastern province of Santa Fe, where the main activity is pig farming. Thanks to the effluent, biogas would have been supplied to the whole community, which currently uses bottled gas, but the plan collapsed because the financing fell through.

Faced with the failure of the initiative, a local pig farmer, Gabriel Nicolino, installed a biodigester on his own farm, which has 200 sows. “I did it with the help of INTA, a bit by trial and error, because in this country it is very difficult to get credit,” Nicolino told IPS by telephone from that town.

“I am starting to use the biogas as a fuel to generate electricity for the breeding barn, which includes heating the pigs in their first few weeks of life. I hope to recoup the investment in the long term,” he added. 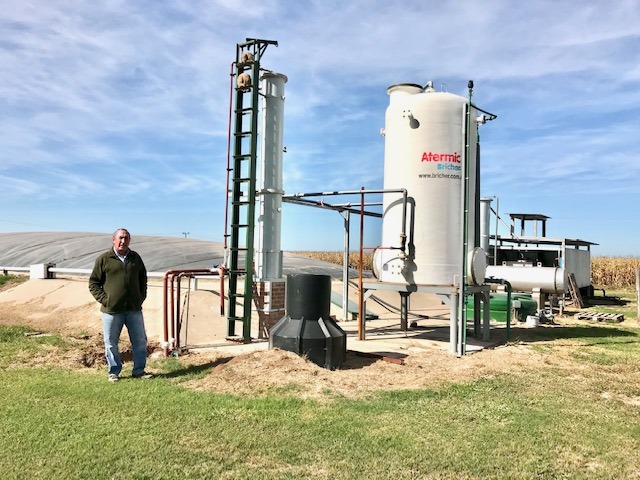 José Luis Barrinat, manager of the Monje Agricultural and Livestock Cooperative, stands by the biodigester, next to the gas filter and the facilities where the gas is cooled before being sent to the electricity generator. The biodigester works with effluent from the pig farm and other organic waste. CREDIT: Courtesy of CopMonje

Who pays the environmental costs?

Ignacio Huerga, an INTA specialist from the city of Venado Tuerto, notes that the outlook for the generation of biogas from agricultural waste is very different depending on the scale of the farms.

“Large farmers have to think about investments of millions of dollars with technology imported from countries like Germany and Italy. Smaller producers are left with developments from universities or national companies that provide technology,” he told IPS from that city.

He added that “the problem of economic viability has to do with the fact that in Argentina nobody pays the cost of the environmental impact of their activity. If they had to pay it, things would be different. In any case, biogas is sure to grow over the next few years in this country.”

One of the large Argentine agribusiness companies that chose biogas is Adecoagro, which produces milk, grains, rice, sugar and ethanol in Argentina and also does businesses in Brazil and Uruguay. Adecoagro describes itself as a “producer of food and renewable energy under a sustainable model.”

The company has four dairy farms in the town of Cristophersen, Santa Fe, with 12,000 dairy cows.

“In 2004 we began to investigate how we could take advantage of cow manure. Back then we applied it on our fields as fertiliser, because our first natural biodigester is the cows’ stomachs, but we saw that there was more potential,” Lisandro Ferrer, head of Industrial Projects at Adecoagro, told IPS.

Thanks to the RenovAr plan, and using Italian technology, Adecoagro invested six million dollars in a biodigester and has been injecting electricity into the national grid since November 2017. “We have 1.4 MW in installed power. We could cover the energy needs of a town of between 500 and 1,000 residents,” Ferrer said by phone from Cristophersen.

“The biodigester is fed with 200 tons of cow manure per day, which is sent to three 5,000-cubic-metre concrete tanks. The way we see it is the cows transform the corn they eat into milk, and what is left over we transform into biogas to generate electricity,” he explained.

However, promoters of biogas still have to work to spark the interest of agricultural producers. Fourteen years ago Diego Barreiro founded the Argentine company Biomax, dedicated to the manufacture and commercialisation of biodigesters, and since then he has been touring the country explaining the benefits of the system.

“We are working hard to lower costs. Today we have 54 biodigesters installed and interest is growing. We have a farmer who, thanks to the biofertiliser made from pig manure, managed to increase the yield of his soybean field so much that in one year he recovered the investment,” Barreiro told IPS in Buenos Aires.

He said “Farmers are beginning to realise that livestock production effluent is not a waste product but a raw material that can generate value, and that an environmental problem can become a profitable solution.”