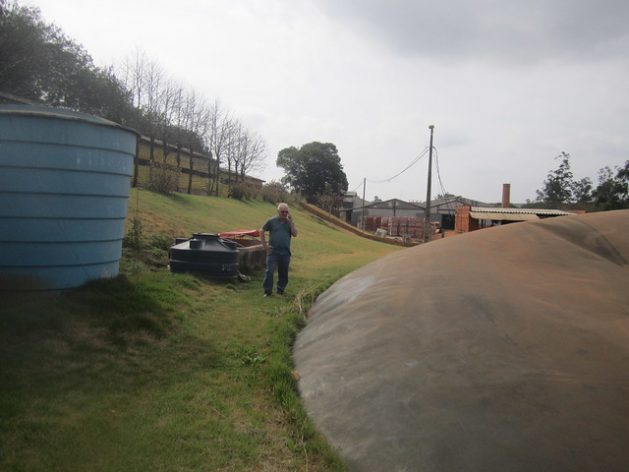 Romário Schaefer, 65, stands between the biodigester buried in the ground on the right and the blue tank holding whey that is mixed with the manure of the pigs he fattens in a row of pig pens (top left) to produce biogas, in the southern Brazilian municipality of Entre Rios do Oeste. In the background is his brick factory, which saves about 6,500 dollars a month in electricity by using biogas. Credit: Mario Osava/IPS

ENTRE RIOS DO OESTE, Brazil, Aug 16 2019 (IPS) - Romário Schaefer is fattening up 3,300 pigs that he receives when they weigh around 22 kg and returns when they reach 130 to 160 kg – a huge increase in meat and profits for their owner, a local meat-processing plant in this city in Brazil.

Schaefer is not interested in the pork meat business. What he wants is the manure, which he uses to produce biogas and electricity that fuel his brick-making factory.

“I’m not a farmer,” he says as he shows us around his Stein Ceramics company in the middle of a 38-hectare rural property on the outskirts of Entre Rios do Oeste, a farming town of 4,400 people in western Paraná, one of three states in Brazil’s southern region, on the border with Paraguay.

He is explaining the difference between himself and neighbouring pig farmers who produce biogas and sell it to the Mini-Thermoelectric Plant inaugurated on Jul. 24 to generate energy that serves the Entre Rios municipal government and all of its facilities in the town itself and the rest of the municipality.

For them it is a new agricultural product, and has been recognised as such in Paraná for commercial and tax purposes. But for Schaefer it’s an input for his factory, which makes bricks.

Animal waste, which pollutes the soil and rivers, is becoming an important by-product in southwestern Brazil, where pig and poultry farming has expanded widely in recent decades.

The Haacke farm, in the municipality of Santa Helena, south of Entre Rios, uses the waste produced by its tens of thousands of hens and hundreds of cattle to produce biogas, electricity and biomethane.

Its biomethane, a fuel derived from the refining of biogas which is employed as a substitute for natural gas, is used in vehicles at the giant Itaipú hydroelectric plant shared by Brazil and Paraguay on the Paraná River, which forms part of the border between the two countries.

In Mariscal Cándido Rondon, a few kilometres to the north, the Kohler family, pioneers in the use of biogas on their large farm, took on another role in the chain of this energy which is more than just clean – it actually cleans the environment. 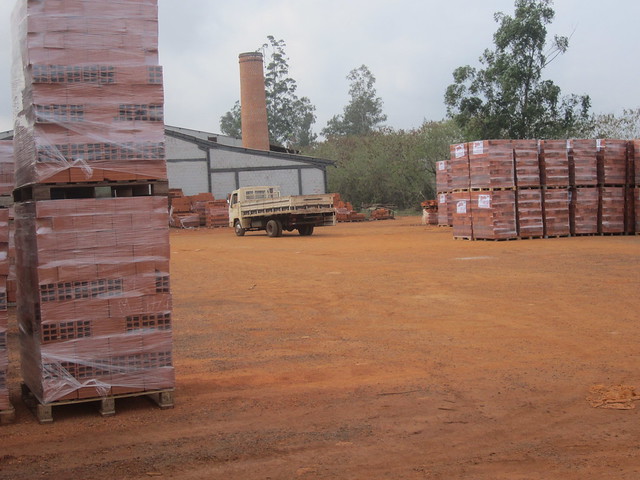 Part of Stein Ceramics, whose prosperity and ecological production were made possible by the biogas produced from the manure of 3,300 pigs. The factory produces enough bricks monthly to build 200 60-square-metre homes in the state of Paraná, on Brazil’s border with Paraguay. Credit: Mario Osava/IPS

They created a biodigester company, BioKohler, which is present in many projects spreading throughout Paraná and other Brazilian states, not only selling equipment but also sharing know-how brought from other countries.

The new family initiative that can guide new projects is a biogas-fired power plant with an installed capacity of 75 kilowatts, built on the farm in partnership with the German company Mele, with many “tropicalised” technological innovations.

“Such a unit is only viable above 150 kilowatts of power, a scale that allows the cost of the investment to be recovered,” Pedro Kohler, who leads the family’s industrial branch, told IPS.

Schaefer looks at the question from the angle of the consumer who generates his own energy. “Without biogas my factory would not be viable, I would not be able to compete and survive in the market,” he said.

In recent years, many ceramic products factories, including brick-makers, went bankrupt in Brazil, something that also happened in the west of the state of Paraná, after the national economic recession of 2015 and 2016, which especially affected the construction industry and aggravated the rise in energy costs.

The pig fattening contract with the slaughterhouse allowed him to avoid bankruptcy, the businessman said. 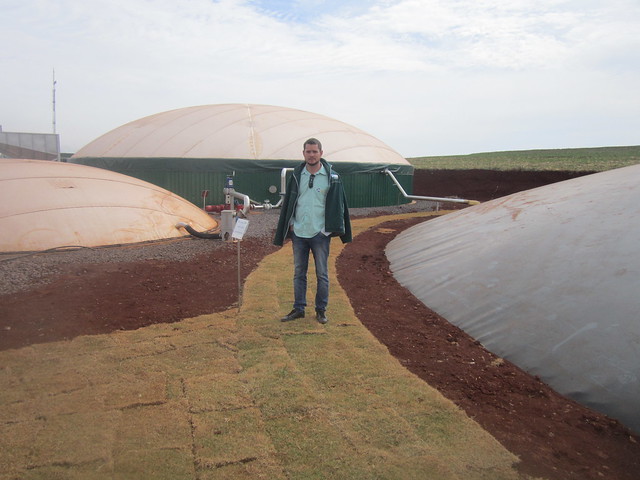 Pedro Kohler, who heads a biodigester company in the western Brazilian state of Paraná, stands between a biodigester and deposits of biogas and biofertilisers from the thermoelectric plant he installed on his family’s farm in the municipality of Cándido Rondon. Innovative technologies and equipment, provided by their German partner Mele, will modernise the biogas sector in Brazil. Credit: Mario Osava/IPS

“The meat-packing plant supplies everything: food, medicine and technical assistance. What I provide is the installations and the workforce; a couple of workers is enough because everything is automatic, and I keep the manure,” he told IPS on his rural property.

That makes it possible for him to deposit 1.8 million litres of pig waste in the biodigester, a large closed ball of black canvas, half buried in a pit measuring about 10 metres in diameter, where it ferments thanks to anaerobic bacteria.

The biodigester is the source of the biogas that feeds a generator which produces 23,000 megawatts/hour per month, enough to save 25,000 reais (6,500 dollars at the current exchange rate) – almost half of his electricity bill.

Actually, his mini-plant operates only four to five hours a day. It does so during peak evening consumption hours, when the electricity supplied by the distribution company is most expensive.

In the next few months, Schaefer hopes to put an additional 2,000 piglets in his fattening shed, where he is building new pigsties. He would thus expand biogas production, both to generate more electricity and to feed the kilns, replacing the burning of briquettes and wood waste.

The businessman has 19 years of experience with biogas, initially focused on burning it as a substitute for firewood, which was scarce, and on preventing pollution. As he explains, he proudly points to his “smokeless” fireplace.

In 2013, rising costs forced him to expand the biodigester and install the electric generator.

He also had to automate his factory to survive. “In the past we employed up to 90 workers, today there are only 20 and production has risen threefold,” he said. 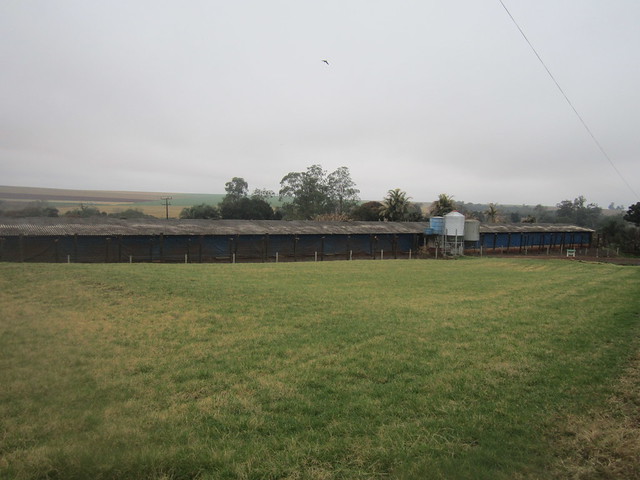 Long sheds where thousands of pigs are fattened are becoming a familiar part of the landscape in rural areas of Entre Rios del Oeste, in southwestern Brazil, where a Mini Thermoelectric Plant was inaugurated on Jul. 24. The plant runs on biogas produced by a network of 18 pig farms and supplies the city government facilities. Credit: Mario Osava/IPS

Behind the progress made was great persistence, the ironing out of numerous problems and third party assistance. Sometimes he almost gave up, he confessed. Some solutions came to him by chance, like the biodigestion mixer recommended by a German embassy official, during a visit to his company.

Similarly, he learned about the advantages of incorporating waste whey into cheese production. This offers the dairy industry a sure way to dispose of it, while preventing pollution.

The main source of learning, technical support and drive for the various projects in western Paraná is the International Center for Renewable Energy-Biogas (CIBiogas), which operates in the Itaipu Technology Park.

Founded in 2013 as a non-profit association of 27 national, local and international institutions, CIBIogas has a specialised laboratory and implemented 11 biogas projects on farms and in agribusiness enterprises.

It is an energy source with varied uses and inputs that requires a lengthy learning process and depends on business models and markets that have yet to be defined and are not yet consolidated, said Rafael González, director of Technological Development at CIBiogás.

“The hormones in pigs change their waste and biogas,” González told IPS.

González said biomethane is the fuel currently used by 82 Itaipu cars and has already been approved in tests with tractors, buses and other large vehicles. It is best to produce it from bird droppings, which facilitate the removal of hydrogen sulfide and carbon dioxide, he explained.

Biogas can meet up to 36 percent of the electricity consumption of this South American country, which is the size of a continent and is home to 210 million people, CIBiogas estimates.

This potential is basically divided between agricultural waste, which includes livestock and sugarcane vinasse, and urban waste, including sewage and garbage dumps.

In addition to avoiding pollution and the emission of greenhouse gases, biogas has been shown by local experience to promote local development, through energy projects and a chain of businesses, such as equipment industries, services and productive arrangements, González said.