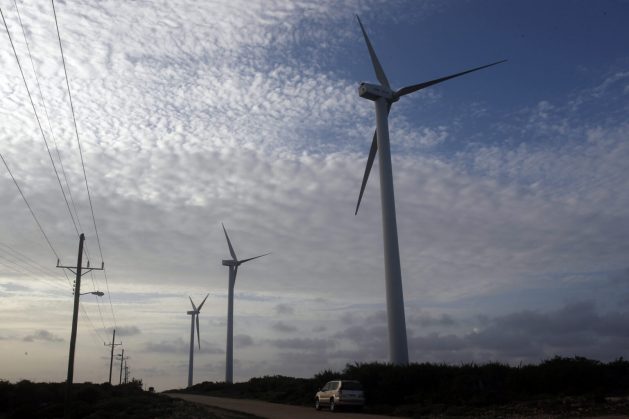 Wind turbines at the Gibara 1 wind farm generate electricity in the municipality of the same name in Holguín province, eastern Cuba. The aim is for at least 37 percent of Cuba’s electricity to come from clean energies by 2030; this is a first step towards a much more ambitious goal that envisions an energy mix made up 100 percent of domestic sources. CREDIT: Jorge Luis Baños / IPS

HAVANA, Feb 28 2022 (IPS) - Cuba has readjusted its plans to achieve at least 37 percent of electricity from clean energy by 2030, a promising but risky challenge for a nation that is a heavy consumer of fossil fuels and has persistent financial problems.

This is a first step towards a much more ambitious goal: an energy mix made up of 100 percent domestic sources, in order to achieve sovereignty.

Approved in 2014, the Policy for the Prospective Development of Renewable Energy Sources (RES) and their Efficient Use projected that solar, wind, biomass and hydroelectric power would account for 24 percent of electricity generation by 2030.

Currently, 95 percent of the electricity produced in this Caribbean island nation comes from burning fossil fuels, including natural gas.

Based on government indications and research by the Electric Union and Cuban universities, “it was determined that we can reach 37 percent (by 2030) with RES,” said Rosell Guerra, director of Renewable Energies at the Ministry of Energy and Mines, in an interview with IPS.

The official pointed out that since it is an island nation, “Cuba is not interconnected with any major power system,” which means that as the use of RES gradually expands, “it is important to ensure the stability of the electric system and the quality of the service, voltage and frequency, as well as the storage of electric power for the night time.”

This archipelago consumes just over eight million tons of fuel annually, of which 4.4 million tons are used for electricity.

Nearly 40 percent of the fuel must be imported, mainly fuel oil and diesel, which have higher prices on the international market.

The country spends some 2.8 billion dollars annually on the electricity sector, including the purchase of fuel, the operation and maintenance of aging thermoelectric plants and the purchase of energy from independent producers.

“We have no alternative, the country cannot continue to pay such large energy bills, which together with food purchases (estimated at some two billion dollars annually), are our largest,” Guerra stressed.

Cuba’s carbon dioxide (CO2) emissions decreased in the last five years, to 22.9 million tons in 2020, according to international data, but energy generating activities are still the main domestic sources of polluting gases.

Achieving 37 percent generation with sustainable energies “will mean the emission of nine million fewer tons of carbon dioxide per year,” added the official. 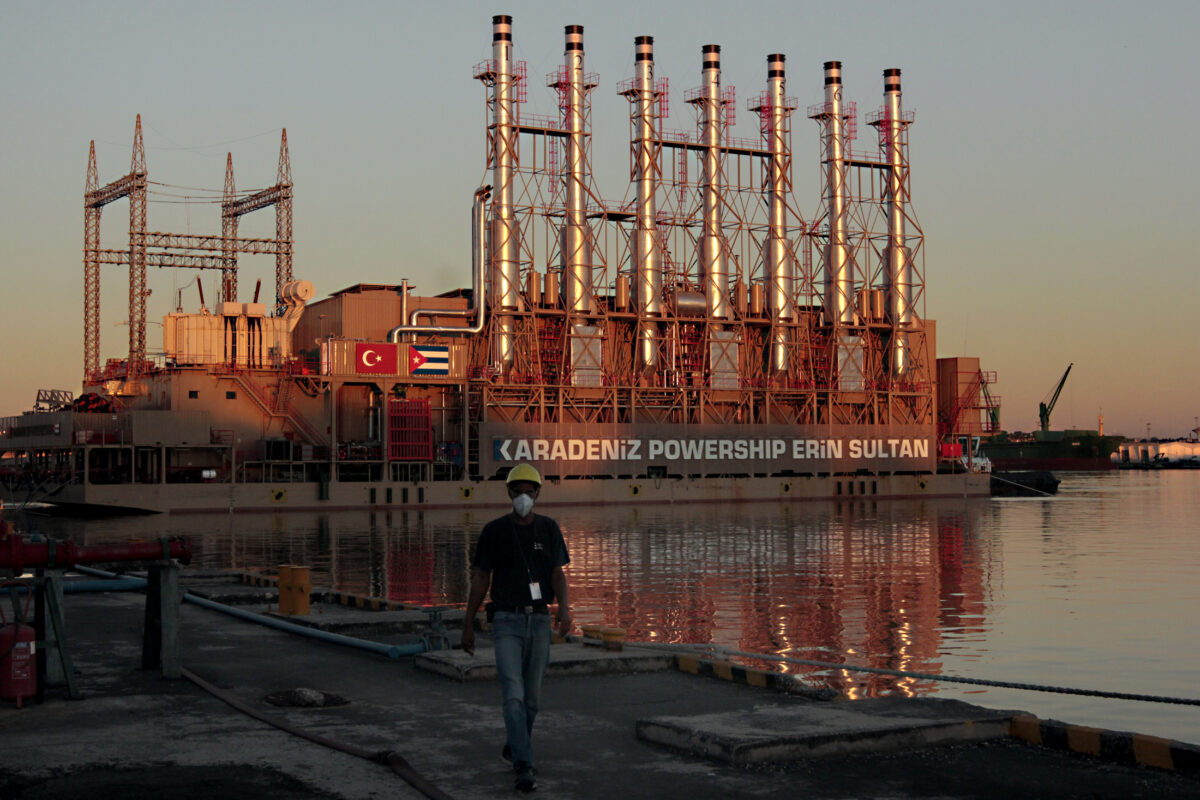 A floating power plant arrives at Havana port from Turkey in November 2021. In Cuba, 95 percent of the electricity produced comes from the burning of oil and oil derivatives, together with natural gas. CREDIT: Jorge Luis Baños / IPS

Picking up the pace

The largest island nation in the Caribbean will have to step on the gas if it wishes, within eight years, to have 3954 megawatts per hour (MW/h) of installed capacity in renewable energies, as outlined in the government’s plan.

“The implementation of the RES Policy is behind schedule; by the end of 2021 we should have had 649 MW/h in operation, but today only 47 percent of what was planned, 304 MW/h, has been achieved,” Guerra acknowledged.

He attributed the delay to the country’s three-decade-long economic crisis, with its main sources of income impacted by the COVID-19 pandemic, which led the authorities to request a moratorium on debt interest payments to international creditors.

Guerra also referred to the effects of the U.S. government’s embargo against Cuba, in force since 1962, which hinders access to credit and technology, increases the cost of freight for transporting fuel and keeps investors away.

However, he clarified, since 2014 “500 million dollars were invested in RES,” which provide energy for some 300,000 households at noon, in a country of more than 3.8 million homes and 11.2 million inhabitants.

The shift in the energy mix by 2030 will require an investment of some six billion dollars “that will have to be sought from external sources, whether through credits or foreign direct investment,” since the country is not in a position to assume the cost alone, said the official.

He pointed out that “in addition to the economic and environmental analysis, the vision in this matter is based on the need to move towards energy independence.”

Cuba has eight thermal plants with an average operating life of more than 30 years.

Most of these plants process heavy domestic crude oil, with a sulfur content between seven and 18 degrees API, which makes more frequent repairs necessary, that are sometimes postponed due to lack of financing.

Malfunctions in the facilities have caused generation crises in recent years, the most recent from April to July 2021, affecting industrial production and Cuban families, most of whom use electricity to cook food, among other uses.

The rest of the electricity is generated by the natural gas produced along with domestic oil, floating units (patanas), together with five percent renewable energies.

The solar program appears to be the most advanced and with the best growth opportunities in a nation whose solar radiation averages more than five kilowatts per square meter per day, which is considered high.

Solar parks contribute 238 MW/h, a little more than 78 percent of the renewable energy in the country, according to the statistics.

Guerra said that “Cuban universities are very proactive with RES and energy efficiency, with several innovative and applied science projects, and with funding, both nationally and in collaboration with the European Union.”

Marlenis Águila, an expert with the Renewable Energy Directorate, told IPS that “some of these programs or projects are based on national technologies, applied on farms, and with results in the field of agro-energy, which are worth replicating widely.”

Both experts referred to the installation, especially in rural areas, of more than 1,000 pumping systems with solar panels that save energy and provide water to livestock and farming families, while a 4,000 cubic meter biogas plant is planned to generate electricity.

“There are seven biogas plants in the country. They are small, the largest has a capacity of 250 kW/h, but they contribute during peak hours, when they are most needed,” said Guerra.

In addition, two new bioelectric plants with a capacity of 40 MW/h, three wind farms (151 MW/h) and two small hydroelectric plants (3.4 MW/h) are under construction, among other projects in different phases with foreign investment and credit management. 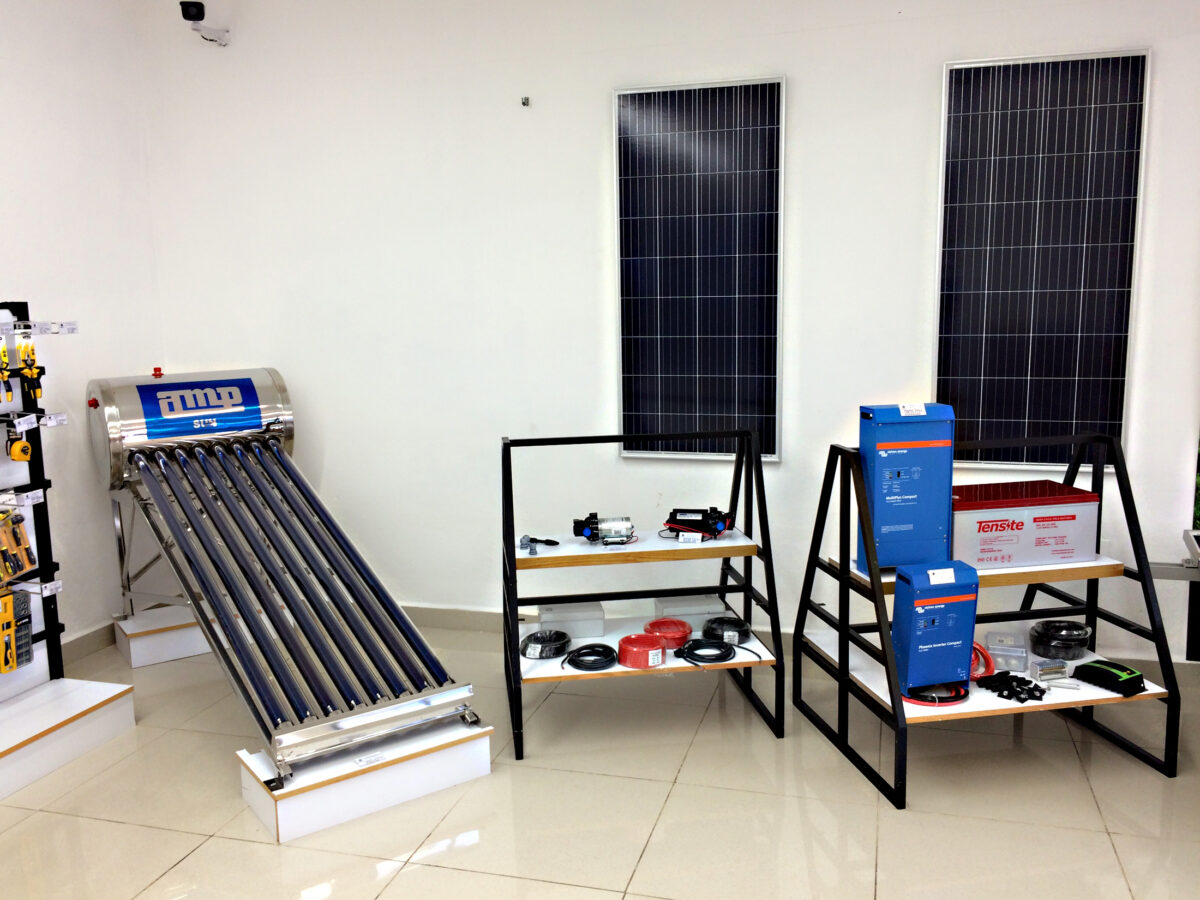 A store specializing in household appliances sells equipment to obtain electricity from renewable sources in the municipality of Playa, Havana. In recent years, Cuba approved regulations with tariff and tax benefits for foreign investors who participate in the expansion of renewable energies, and began selling solar panels and heaters to promote their use by the public. CREDIT: Jorge Luis Baños / IPS

The second edition of the Renewable Energy Fair, scheduled to take place in Havana Jun. 22-24, will seek to attract foreign investors for the transition to renewable energies in Cuba.

“The first fair, in January 2018, was modest in size but very useful,” Guerra said. “Prestigious international agencies came and transferred knowledge to us. This time we intend to emphasize solar energy – both photovoltaic and thermal – and biomass.”

Representatives of international agencies, projects and companies such as the International Renewable Energy Agency, the World Wind Energy Association, the International Solar Alliance, the Green Climate Fund, the Belt and Road Energy Partnership, the French Development Agency and the Japan International Cooperation Agency (JICA) are expected to attend.

In recent years, Cuba approved regulations to encourage the presence of foreign investors in the development of sustainable energy, both in large and small local projects.

Resolution 223 of the Ministry of Finance and Prices, published in June 2021, exempts wholly foreign-owned companies implementing electricity generation projects with RES from paying taxes on profits for eight years, from the start of their commercial operations.

Other regulations, such as Decree-Law No. 345 of 2019, contain incentives to promote self-supply, the sale of surpluses to the National Electric System, as well as tariff and tax benefits for individuals and legal entities that use them.

The government strategy also proposes the installation of the more efficient LED bulbs in public lighting and the sale of solar water heaters and efficient equipment, which despite their high prices are aimed at expanding the use of renewable energies among the public.