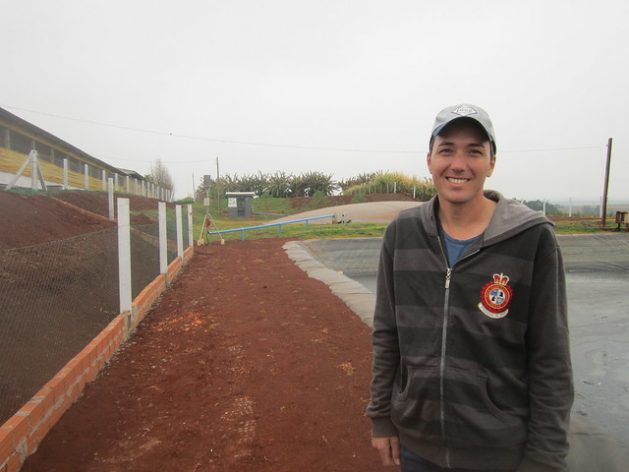 Claudinei Stein is a farmer who produces biogas using the manure of his 7,300 pigs, which he breeds and sells to a pork processing plant in southern Brazil when they reach 23 kilos of weight. To his right is the biofertiliser pond, with the manure used to produce biogas in a biodigester. At the far left are the pigsties. Credit: Mario Osava/IPS

ENTRE RIOS DO OESTE, Brazil, Aug 6 2019 (IPS) - Pigs, already the main source of income in this small municipality in southwestern Brazil, now have even more value as a source of electricity.

The mini-thermal power plant of Entre Rios do Oeste, inaugurated on Jul. 24, uses the biogas provided by 18 farms, in a pioneering technical-commercial agreement in Brazil involving pig farmers, the city government, the Paraná Energy Company (Copel), the Itaipu Technological Park (PTI) and the International Center for Renewable Energies-Biogas (CIBiogas).

The project was executed by PTI – the Brazilian-Paraguayan hydroelectric power plant Itaipu‘s centre for teaching and development research – and CIBiogás, a non-profit association of 27 international, national and local institutions, which operates at the PTI headquarters.

The Entre Rios city government will benefit by generating electricity with the biogas it buys from the pig farmers. The electricity is injected into Copel’s distribution network, reducing the energy costs paid by 72 municipal office buildings and schools.

“It will produce savings that we will invest in health and education,” said Mayor Jones Heiden.

His municipality, in the western part of the southern state of Paraná and on the shores of the Itaipú reservoir that separates Brazil from Paraguay, was a natural choice for the project, as there are some 155,000 pigs, or 35 animals for each of the 4,400 local inhabitants.

Rafael González, CIBiogás’ director of technological development, told IPS in his offices that the city government also took an interest in the project and offered the area for the plant to be installed, resources for its operation and support for the pig farmers.

Of the more than 100 pig farmers in the municipality, only 18 who are located where the 20-km network of gas pipelines was installed are participating, after accepting the conditions for financing the biodigester, which converts the waste into biofertiliser while extracting the biogas.

“Some didn’t want to because it would take them more than 10 years to pay off the loan. There were 19 who were going to take part, but one pulled out after deciding to build his own biodigester and generator” in an individual business, taking advantage of the abundant manure produced by his 4,000 pigs, one of the participants, Claudinei Stein, told IPS. “That was the beginning, the second step will be public lighting,” opening up opportunities for other producers, said the mayor.

The mini-thermal power plant, with a capacity of 480 kilowatts, can generate 250 megawatts/hour per month, 43 percent more than the city government’s maximum consumption. It involves 215 tons of manure and 4,600 cubic metres of biogas produced daily by 39,000 pigs.

Stein has 7,300 feeder pigs which he receives from the Friella company when they weigh about seven kilos, fattens them, and returns them when they reach 22 or 23 kilos.

Friella is the main company in town, with three meat-packing plants where pork is processed and sold fresh or industrially processed, as well as an animal feed factory and its own hogpens.

But it outsources the breeding and fattening of most of the pigs. Stein explained that while it entails transportation costs, the company saves on installations, space and labour power.

Specialising in the second stage, in which each animal produces less than half of the manure from the entire fattening process, Stein estimates that he will earn an income of 1,800 to 2,000 reais (375 to 430 dollars) a month, enough to pay off the credit for the biodigester, which cost him 75,000 reais (19,800 dollars), in eight years. But he joined the project for other reasons: to produce biofertiliser and improve the environment. Biodigestion eliminates odors, mosquitoes and contamination of groundwater on his 13-hectare property and improves manure as fertiliser for planting corn and soybeans.

“This way I save money on chemical fertilisers,” he explained. “I also like bold initiatives,” said the 39-year-old farmer, who learned about the benefits of biodigesters at a young age, because there was one on a cousin’s farm where he worked.

But the installation of the Entre Rios plant was plagued by delays, despite the recognised advantages of biogas and its potential for expansion in the western part of the state, due to the heavy presence of pig and poultry farming.

But the opportunity to bring it to fruition arose in 2012, when the National Electric Energy Agency – the regulator of the sector – outlined strategies and criteria for biogas projects, calling for proposals to be presented.

The projects for Paraná depend on funds that the Copel distributor must allocate to research and development projects, equivalent to 0.5 percent of its turnover.

“We registered the Entre Rios do Oeste project,” but the contract with Copel was not signed until 2016, Gonzalez said.

Difficulties then arose with energy and tax regulations, which blocked the city government from purchasing the biogas, defined as a processed industrial good produced by farmers, the director of CIBiogas explained. View of a row of gas holders, large containers for storing the biogas that will fuel the mini-thermal power plant of Entre Rios do Oeste, which generates electricity using the gas extracted from the manure of part of the 155,000 pigs raised in this municipality in the southern Brazilian state of Paraná, on the border with Paraguay. Credit: Mario Osava/IPS

New regulations were necessary, with a different interpretation, that recognises biogas as an unprocessed agricultural product, in order to design the business model for the mini-thermoelectric plant fueled by biogas, which is in the category of distributed generation by consumers.

The project then took on its definitive shape, with the city government buying biogas from the pig farmers who installed the biodigester.

But opening up credit lines to finance the equipment required more lengthy negotiations, to come up with a model replicable in other municipalities and regions and with different arrangements.

There was a precedent for the construction of a mini biogas power plant in the municipality of Marechal Cândido Rondon, 34 km northeast of Entre Rios. The Agroenergy Condominium for Family Farming of the Ajuricaba River Basin, later called Coperbiogas, emerged there in 2009.

In 2014 it began to generate electricity, as part of another CIBiogas project. But it didn’t last long. Today, only 15 of the 33 members remain in the cooperative, the mini thermoelectric plant was closed down, and the biogas is sold to a neighbouring poultry plant belonging to the Rondon Limited Mixed Agroindustrial Cooperative (Copagril).

“It was a successful project” and not a failure as some people saw it, according to González. “Its objective was not to become economically profitable, but to clean up the environment, clean up the river,” he argued.

In fact, it was part of Itaipu’s Cultivating Good Water Programme, which sought to prevent pollution of rivers from sewage that would end up in the reservoir created by the hydroelectric dam.

The project remains active: 250 cubic metres of biogas are transported daily through the 25-km network of pipelines to three gasometers, while a filtering system removes the hydrogen sulfide that causes corrosion.

The families continue to use gas in their homes and some use the gas for milking, thanks to which at least one of the farms has improved the quality of their milk, using biogas in the pasteurisation process, Daiana Martinez, a biogas information analyst at CIBiogás, told IPS.

In Ajuricaba, unlike Entre Rios, biogas is made from both cattle and pig manure. But the scale of production and the biodigesters are much smaller, which makes electricity generation economically unfeasible, said Pedro Kohler, owner of a local biodigester factory.