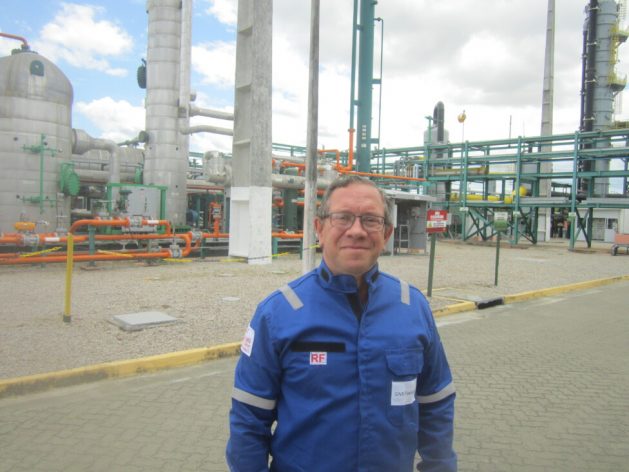 Thales Motta, director of GNR Fortaleza, stands in front of the biomethane plant located in northeastern Brazil, the development of which required overcoming prejudices, mistrust and misinformation to open up the market for gas generated from garbage. Now biomethane is expanding, making use of landfills and agricultural biomass. CREDIT: Mario Osava/IPS

FORTALEZA, Brazil , Sep 5 2022 (IPS) - The increasing productivity with which humankind generates waste has gained at least one sustainable counterpart: the extraction of biogas from landfills, a growing activity in Brazil.

"There was a great deal of prejudice even among engineers, skepticism in the gas companies. We had to present analyses and quality tests that were more rigorous than the ones required for fossil fuel gas. But we broke down the barrier of discredit and opened a new market, proving that it is a safe, stable gas with predictable prices.” -- Thales Motta
Two small plateaus stand out in the landscape on the outskirts of Caucaia, one of the 19 municipalities that make up the metropolitan region of Fortaleza, capital of the state of Ceará in the Northeast of the country.

Although they look similar, one of the hills receives about 5,000 tons per day of solid waste collected in the metropolitan region of 4.2 million inhabitants. The other, the old sanitary landfill which began to operate in 1991, is already closed, but it is the one that generates more gas.

“We are pioneers in the production of biomethane from garbage,” said Thales Motta, director of Fortaleza Renewable Natural Gas (GNR), a partnership between the private companies Ecometano, of the MDC renewable energy and natural gas group, and Marquise Ambiental, of Fortaleza, which manages the Caucaia landfills.

Biomethane is the by-product of biogas refining that removes other gases, such as carbon dioxide and hydrogen sulfide.

GNR Fortaleza produces about 100,000 cubic meters per day of this gas, which is sold to the state-owned Ceará Gas Company (Cegás), which mixes it with natural gas in its pipelines.

“We supply 15 percent of the gas distributed by Cegás, which trusted the quality of our biomethane,” Motta said during IPS’s visit to the GNR plant, inaugurated in December 2017. 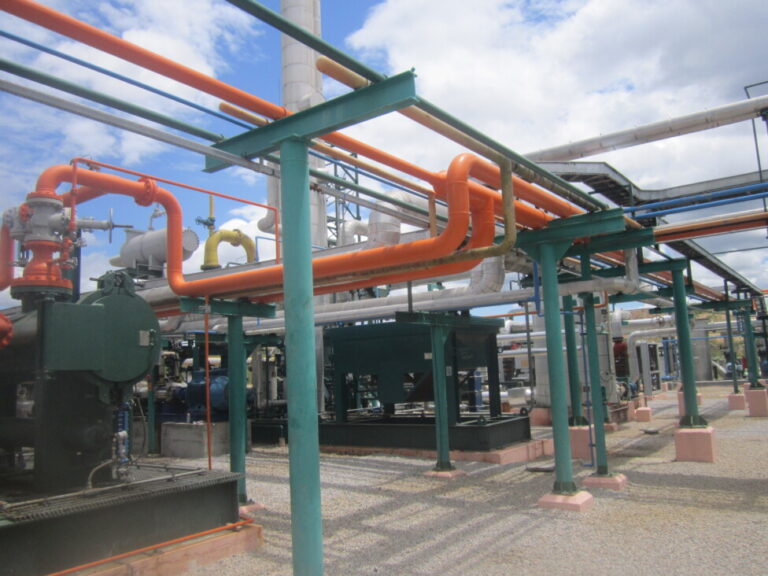 This labyrinth of pipes collect biogas from the landfill and refine it to produce biomethane with 95 percent purity. The renewable gas is mixed with natural gas for industrial use, in vehicles and thermoelectric plants, as well as in homes and businesses in the metropolitan region of Fortaleza, in northeastern Brazil. CREDIT: Mario Osava/IPS

Ecometano’s pioneering activity is due to another plant, Dos Arcos, established in 2014 in São Pedro da Aldeia, a coastal city of 108,000 inhabitants, 140 kilometers from Rio de Janeiro. Its capacity is limited to 14,000 cubic meters per day.

“There was no regulation for biomethane then and the National Agency of Petroleum, Natural Gas and Biofuels denied us authorization to sell it,” said Motta, an electrical engineer. There were losses; the sales were made directly to a limited number of customers, such as supermarkets.

But the company persevered and the regulation came out in 2017, shortly before the start of GNR Fortaleza’s operations.

“There was a great deal of prejudice even among engineers, skepticism in the gas companies. We had to present analyses and quality tests that were more rigorous than the ones required for fossil fuel gas,” said the plant manager.

“But we broke down the barrier of discredit and opened a new market, proving that it is a safe, stable gas with predictable prices,” he added. 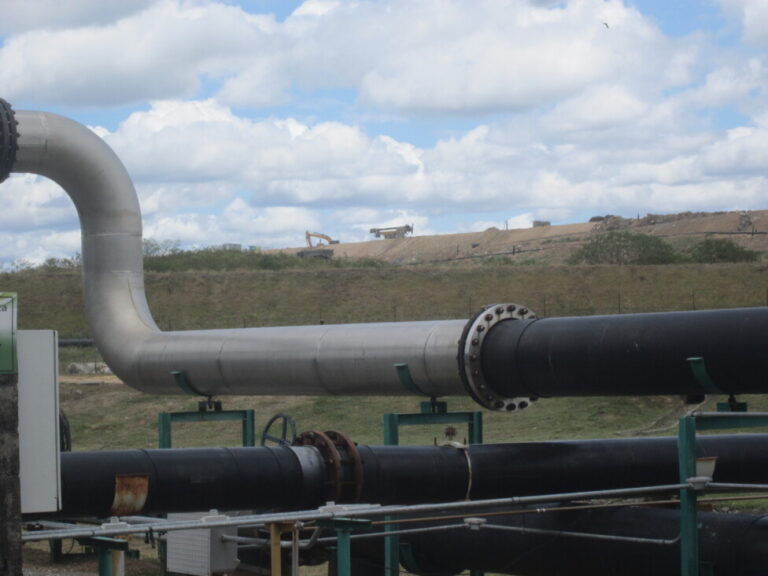 A view of the new Caucaia landfill, near Fortaleza, capital of the state of Ceará in northeastern Brazil, which receives about 5,000 tons of garbage a day. It already produces biogas, but will do so on a larger scale in a few years. CREDIT: Mario Osava/IPS

At the beginning, biomethane cost 30 percent more, but today it is 30 percent cheaper than natural gas, in view of the rise in fossil fuels, he pointed out. Its price depends on internal factors, such as inflation, and is not subject to unpredictable oil prices on the international market or exchange rate fluctuations, he stressed.

“Biomethane competes with fossil gas on an advantageous footing today. But even if oil becomes cheaper, the market is predisposed to betting on biomethane” because of environmental issues, he said.

“Cegás decided to distribute biomethane because it considers it strategic to diversify its mix with a cleaner, renewable and sustainable gas, thus contributing to reducing pollution and improving the environment,” the company’s president, Hugo de Figueiredo Junior, told IPS.

“It is also an opportunity to expand suppliers, competition and conditions to offer better prices to the end consumer,” he added.

Cegás, in which the state of Ceará is a majority shareholder, was a pioneer within Brazil in the injection of biomethane into its network, starting in May 2018.

The nearly 15 percent proportion of biomethane in the total volume constitutes “one of the highest percentages of renewable gas injected into the grid by a distributor in the world,” Figueiredo said.

That proportion may expand in the future, but biomethane faces several challenges, he added.

There is a need to disseminate existing technological solutions and facilitate access to them, expand knowledge about potential uses of green gases, and improve regulation and processes for the collection and disposal of solid waste and wastewater, he said. 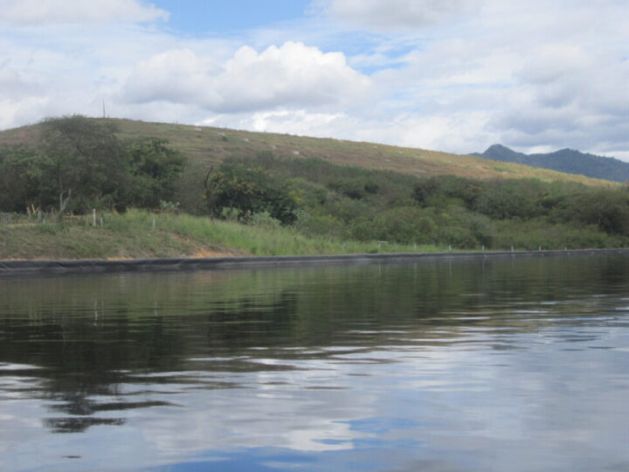 The old landfill, now covered, still generates biogas that is converted to biomethane by refining, in Caucaia in northeastern Brazil. The dark lake is leachate, a highly polluting waste liquid that is treated before being discarded by sprinkling it on the soil. CREDIT: Mario Osava/IPS

In terms of production, GNR Fortaleza is now the second largest biomethane plant in Brazil. It is surpassed by Gas Verde, from Seropédica, a town near Rio de Janeiro, which has been producing 120,000 cubic meters per day since 2019.

Many interested parties visit GNR, which has become a reference point for gas generated from waste because it has developed process technologies that make it possible to integrate equipment from different national and international suppliers, “with its own codes that are open” to anyone, said Motta.

Currently, many companies that extract biogas from landfills for electricity generation are preparing to convert their plants to biomethane production, he said.

“We receive visits here from universities and groups of interested parties. We have to build an auditorium for lectures. There was no laboratory for biomethane analysis in the Northeast. Now we have one and research on this gas is mushrooming,” Motta said.

But it is necessary to take a broader view, he acknowledged. Landfills are limited. A minimum of 2,000 tons of waste per day is needed to make a biomethane plant viable, he estimated. Only large cities with at least one million inhabitants generate that much solid waste.

“We have to look for other kinds of biomass,” he said. 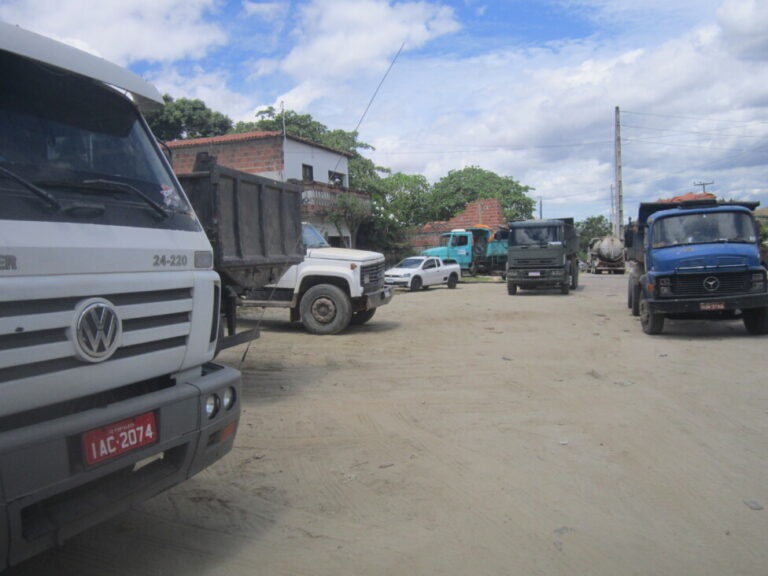 Hundreds of trucks travel the roads transporting garbage to the Caucaia landfill, some 20 kilometers from Fortaleza, the capital of the state of Ceará in Brazil’s Northeast region. About 5,000 tons of garbage are produced daily from the metropolitan region, which has 4.2 million inhabitants. CREDIT: Mario Osava/IPS

This process is already underway, especially in the South and Southeast regions of Brazil, where largescale agricultural production offers a large volume of waste. Sugarcane is the main source of biomass, as it is also planted to produce ethanol, whose consumption in vehicles is on par with that of gasoline.

Livestock manure, especially from pigs, drives the production of biogas for electricity generation, and a growing proportion goes towards conversion into biomethane, especially for use in vehicles.

“Biomethane is a suitable fuel for the energy transition, has more predictable prices (than fossil fuels) and can be produced in regions far from the existing natural gas network,” which in Brazil is concentrated along the eastern coast, Figueiredo, the president of Cegás, said from the company’s headquarters in Fortaleza.

But not having a pipeline nearby can frustrate large projects, Motta said. He gave the example of a sugar agribusiness company that could produce 30,000 cubic meters of methane a day. As this is double its own consumption and the nearest big city is 90 kilometers away, the project was unfeasible.

Harnessing gas from garbage, and from biomass in general, has become an urgent necessity in the face of the climate emergency. Methane contributes more intensely to the greenhouse effect than carbon dioxide, the most prevalent greenhouse gas, which is used to gauge threats to the climate.

Brazil and other countries pledged to reduce methane emissions by 30 percent by 2030, as a crucial step towards keeping global warming to a maximum of two degrees Celsius by 2050.

GNR Fortaleza, located in Caucaia, a city of some 370,000 inhabitants 15 kilometers from Fortaleza, plays an environmental role. But in terms of employment, it generates only 32 direct jobs and an uncertain number of indirect jobs, including outsourced services, temporary consultants and suppliers of certain equipment.

Cegás serves only 24,000 gas consumers in Greater Fortaleza. According to its data, industry accounts for 46.26 percent of consumption, thermoelectric plants for 30 percent and motor vehicles for 22.71 percent. There is little left – just 0.73 percent for households and 1.22 percent for commerce.