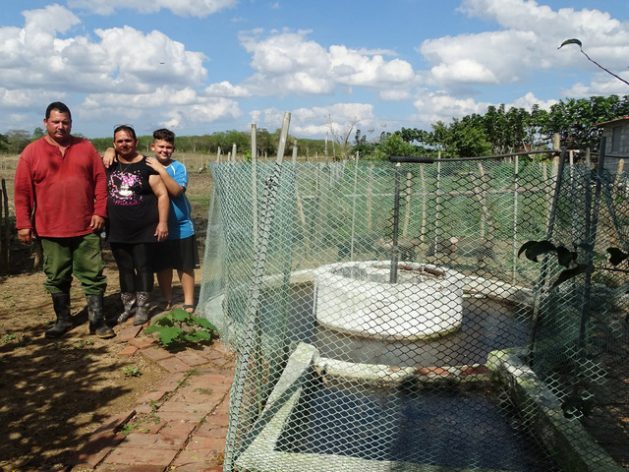 Yunia Cancio and her husband and son stand next to the biodigester installed on their El Renacer farm, in the municipality of Cabaiguán, Sancti Spíritus province, thanks to the Biomass Cuba project financed by the Swiss Agency for Development and Cooperation. CREDIT: Courtesy of Biomass Cuba

HAVANA, May 19 2021 (IPS) - Yunia Cancio cooked with firewood until a few years ago, when a biodigester was built on her family’s El Renacer farm in Cabaiguán, a municipality in the central Cuban province of Sancti Spíritus, under the Biomass Cuba project. That change meant a lot for her family’s quality of life, but it was not the only one.

“Life has improved a lot thanks to the biodigester, especially for me, because as the woman of the house I’m the one who cooks,” the 48-year-old farmer told IPS by phone from her family farm. “It’s a very clean fuel, more comfortable and safer, everything is more hygienic. Before I used to cook everything with firewood and my day-to-day workload was harder.”

She explained that using the biogas she normally cooks for 10 people a day and for 20 during the planting and harvest seasons, when the tobacco farm employs more workers.

Cancio and her family are among the residents of agricultural localities involved in Biomass Cuba, a project initiated in 2009 with funding from the Swiss Agency for Development and Cooperation (SDC), which is currently in its third stage and is to be completed in 2022.

According to Leidy Casimiro, a professor at the University of Sancti Spíritus and an expert with Biomass Cuba, in its different facets of renewable energy, training and agroecology, the initiative directly benefits more than 15,000 people, including 5,417 with biogas technologies.

The initiative is coordinated by the Indio Hatuey Experimental Station, a research centre attached to the University of Matanzas in western Cuba, and also involves related institutions in the eastern provinces of Guantánamo, Santiago de Cuba, Granma and Holguín, and the central provinces of Las Tunas and Sancti Spíritus.

The biodigester at the El Renacer farm began operating on Jul. 15, 2014. “It was built by my father-in-law and brother-in-law, with the help of my husband and children, who carried bricks and made the mixture. With a capacity of nine cubic metres, it was built under the supervision of Alexander López, an expert in biodigesters,” Cancio said.

She also explained that electricity savings have been significant on the 28-hectare farm where her family has long-term “usufruct rights” and where they raise pigs and a few head of cattle and grow tobacco, vegetables and fruit.

“Something really important was when we received a rice cooker that was powered by biogas, a wonderful thing that we hadn’t seen before; we enjoyed it very much,” she recalled when commenting on the changes brought by the biofuel.

The plant also created new routines. Since it is fed mainly by manure from the farm’s pigs, the biodigester is connected to the pigsties. From time to time, cow manure is added to make the biogas more potent, from the stables, which are farther away.

According to Giraldo Martín, national director of Biomass Cuba, “The results are very valuable because today we have farms that consume only 30-40 percent of the conventional energy they used before.” 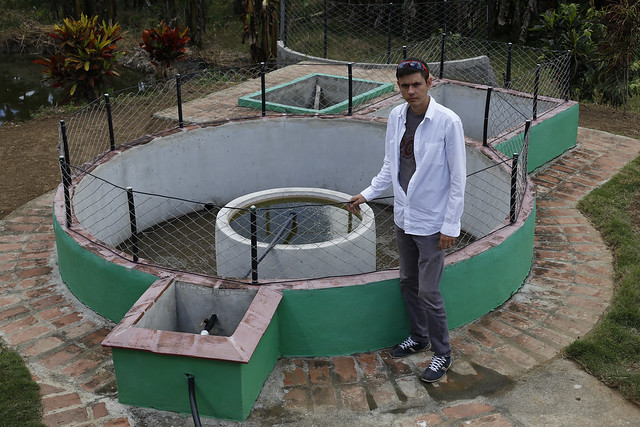 Engineer Alexander López Savrán stands next to one of the standard fixed-dome biodigesters he has developed, installed on a farm in La Macuca, a village in the municipality of Cabaiguán, in the central province of Santi Spíritus, Cuba. CREDIT: Jorge Luis Baños/IPS

In a telephone interview with IPS from the municipality of Perico, in the province of Matanzas, Martín explained that in all its stages, Biomass Cuba has provided technologies and created capacities so local residents could move towards the concept of agroenergy in rural areas.

He also mentioned the covered lagoon model, an industrial technology that treats large quantities of biological waste to provide high volumes of biogas on a daily basis, which may be used in the future to generate electricity for the national power grid.

“In social terms, Biomass has had a great impact in the communities where it has intervened, generating employment, producing food, and in Cabaiguán, receiving domestic fuel through the supply networks that conduct biogas from pig farming areas to homes, with social and environmental benefits,” Martín said.

“We have farms that use the solid and liquid waste from the biodigesters as an excellent fertiliser with abundant nutrients that also contributes to the recovery of degraded soils, which are widespread today in agricultural areas in Cuba,” he explained.

Cancio said these techniques are used on her family’s farm, where the effluent from the biodigester “is used to fertilise the farm’s organoponic crops, including varieties of vegetables, herbs and medicinal plants, and fruit trees.”

“We are diversifying and…we now have infrastructure to extract oils, add value to various products, obtain flour from our root vegetables (a staple of the Cuban diet), motivate us to improve consumption habits and create new recipes with things that we did not use before,” she said proudly.

However, the Biomass project has also had its setbacks.

Martín said that one of the barriers that Biomass has had to break down was the lack of understanding about the concept of treating animal waste and producing energy, something that has taken a great deal of explaining and “is still not completely worked out.” 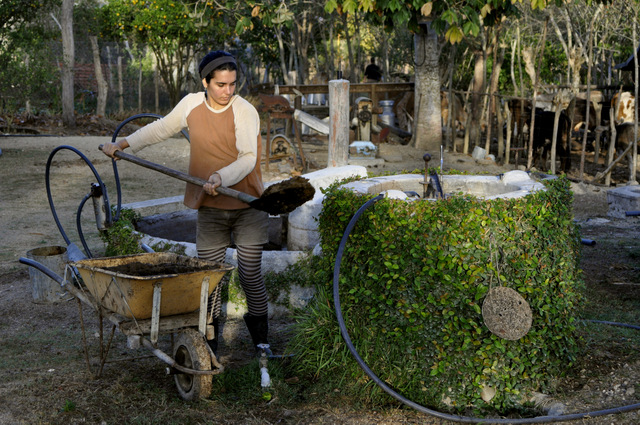 He also considered it a challenge to align the priorities in the bidding and purchasing system with the plans of companies and productive and service organisations, so that the equipment acquisition processes are efficient and allow the technologies and knowledge generated by the projects to be applied expeditiously.

The project director said the main impact of the initiative was the way it influenced public policies.

Biomass contributes to “understanding the importance of renewable energy sources in rural areas, the role of the contributions that farms can make with biodigesters, waste treatment systems on pig farms, the use of rice husks to produce electricity and steam to dry rice, as well as the use of residual wood from sawmills to generate energy,” Martín said.

Meanwhile, José Antonio Guardado, national coordinator of the Movement of Biogas Users (MUB), told IPS that there are between 4,500 and 5,000 biodigesters around the country. “A count is currently being carried out in order to have a more precise figure,” he said by e-mail from Santa Clara, capital of the province of Villa Clara.

The MUB, which brings together producers who use the technology of anaerobic digestion by the action of microorganisms, emerged in Cuba in 1983 and has 3,000 members throughout this Caribbean island nation.

Guardado said the most urgent task of this movement was the promotion of the closed cycle system.

“In our assessment, in less than five percent of the installed biodigesters, closed-loop criteria and concepts are used, which means that the surplus end products are used in the processes that are generated in the chain on the farm, such as fish farming, irrigation or fertilisation,” he said.

Guardado said the MUB and all other actors working on the issue at the local level should defend this technology until all existing biodigesters in the country are closed-loop, including the distribution of surpluses among neighbouring producers.

According to the Ministry of Energy and Mines, 95 percent of the national energy mix is made up of fossil fuels, while this year the generation of energy from renewable sources is expected to grow to 6.3 percent of the total energy produced in the country.

Cuba’s goal is for 24 percent of energy to come from renewable sources by 2030.