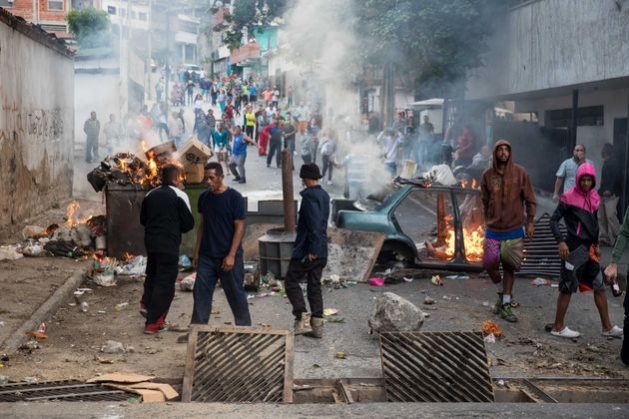 Demonstrators in the neighborhood of Cotiza, on the north side of Caracas. Credit: Courtesy of EfectoCocuyo.com

CARACAS/BOGOTA/BRUSSELS, Feb 28 2020 (IPS) - Power in Venezuela is slipping away from state institutions and concentrating in the hands of criminals, guerrillas and other non-state actors. Any new negotiations between government and opposition must consider how to defang these armed irregulars, who might otherwise scuttle an eventual settlement.

What’s new? Political turmoil, economic ruin and heightening tensions with neighbouring countries have furnished non-state armed groups, including guerrillas from Colombia, criminal syndicates, paramilitaries and pro-government vigilantes known as colectivos, with the means to expand their influence and presence across Venezuela.

Why does it matter? Armed groups filling the vacuum left by a government determined to resist domestic opposition, international pressure and mounting sanctions pose a threat of escalating violence in the absence of negotiations, while also entailing major risks of sabotage in the wake of any eventual political settlement.

What should be done? These groups’ threat to peace must be contained, and that imperative should feature prominently in future talks aimed at settling the crisis. Those negotiations should include Venezuela’s military. Demobilising each armed group will require a tailored approach, but most should aim for deals securing acquiescence in a comprehensive political settlement.

The ceaseless struggle for supremacy between President Nicolás Maduro’s government and opposition forces has turned state organs into partisan bodies that either solicit support from armed groups or overlook them.

Economic ruin brought about by government mismanagement – now worsened by U.S. sanctions – has pushed numerous Venezuelans into illicit livelihoods and the orbit of organised crime.

Meanwhile, the country’s long, porous borders have allowed Colombian guerrillas to gain footholds deep inside the country. The armed groups are far from identical, but all are ready to use violence and territorial control to further their goals, and any might sabotage a settlement that Venezuela’s competing political forces eventually agree to.

Defanging them will require approaches tailored to each outfit, but the main goal should be to demobilise fighters and seek their buy-in to a deal that ends Venezuela’s collective agony.

Guerrillas from Colombia, loyalist pro-government militias known as colectivos, paramilitaries and a catalogue of criminal gangs stand out as the main non-state armed groups now operating in Venezuela. Their methods, goals and affinities vary hugely.

Some profess ideological motivations while others pursue naked criminal profit. Some work in alleged collusion with ruling elites, while others purportedly have ties to opposition elites. The opposition led by Juan Guaidó and its international allies, now numbering close to 60 countries, accuse all but the right-wing paramilitaries of complicity with state security forces, or even with the high military command and political elites within chavismo, the movement named after the late president, Hugo Chávez.

But the exact nature of the ties between these armed groups and the state, and the mutual benefits that arise from them, are not always easy to identify. Skirmishes between state and non-state actors acting in supposed coordination have exposed the high levels of mistrust that divide them.

Formal talks between the government and opposition are moribund, but if and when they restart, they should urgently address the questions of how to reduce the armed irregulars’ influence and how to stop them from scuttling agreements that the sparring Venezuelan sides may reach. As the types of armed groups present different problems, each will need its own remedy.

Dealing with Colombian guerrillas will require intensive cooperation between Caracas and Bogotá, ideally as part of efforts in the latter capital to end the insurgencies through negotiations aimed at general demobilisation.

Some colectivos may be persuaded to reassume their historical role as mediators between state and society. As for criminal elements, several of them may also accept deals whereby they avoid prosecution or face reduced sentences in exchange for giving up arms.

Experience in other Latin American countries shows that such tactics, while not always easy to swallow, are more likely to help the Venezuelan state reassert its writ with a minimum of additional bloodshed.