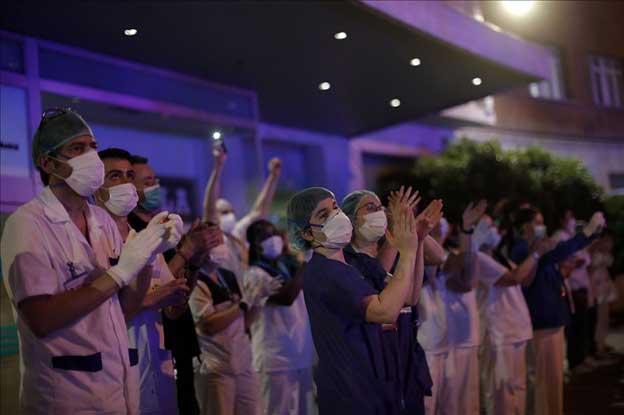 COPENHAGEN, May 28 2020 (IPS) - For the past few decades, many big corporations and very wealthy individuals have operated according to the myth that they are “self-made”, that their success owed nothing to anyone else.

From that narrative has come the notion that they are entitled and able to cut themselves off from others, contributing as little as possible in taxes and workers’ wages.

But now that the myth has run into the fact of the Covid-19 pandemic, it’s clear that none of us are independent; that we are, in fact, interdependent.

I am a one of those who gets highlighted as a self-made man. I am told that I fit the storyline: I am an immigrant son of a single mother from Iran; while my mum cleaned in hotels, I studied hard, worked hard, and went on to be a successful entrepreneur. I rose to be a multimillionaire – the American Dream, except in Denmark!

It has always been obvious to me, however, that I have not risen all by my own efforts: that I am not a self-made man, that the welfare state made me. Without the creche care and schooling and health care I received, I could not have flourished; and without Denmark’s strong public services, neither could my business.

That’s why, in real life, contrary to the Hollywood tale, kids are more likely to achieve the American dream in Denmark than in America. That’s why I recognise that it is my responsibility to help others rise, by giving back – not only as a philanthropist, but also, and preferably, as a taxpayer.

That’s why I am helping to lead an international campaign – Move Humanity – that is demanding that governments increase taxes on people like me.

A number of governments have shared that pressure from the richest individuals is a major obstacle in the way of key inequality-reducing reforms. Studies show that the super-rich have been avoiding as much as 30% of their tax liability. Poor countries have been losing $170 billion of tax revenues every year as a result of tax dodging. Many corporations and wealthy individuals have lobbied against higher taxes, arguing that they would be anti-business. But, as we have seen, the fact is that tax is not anti-business, pandemics are anti-business.

A small number of plutocrats are profiteering in this crisis in obscene ways and appear to be planning for dystopia. But most businesses are ultimately threatened by the combination of health collapse, economic collapse, systems collapse and trust collapse that Covid-19 has wrought.

Progressive taxation – from corporate profits, and from personal income and wealth – is the only sustainable way to fund the public services and infrastructure on which restoration depends.

Public health, stability and trust are the platforms on which business viability stands. To do what is right is also to do what is practical.

It is time for millionaires to back redistribution. Over 175 millionaires signed the open letter launched at Davos in January 2020, “Millionaires against Pitchforks”, that called for higher taxes on people like themselves.

But these 175 were seen as outliers. Now, after the Covid-19 crisis, that could change, and must change.

The Covid-19 crisis has highlighted just how much society depends on frontline workers, these no longer hidden heroes. It has also highlighted, in the Financial Times’s words, that “radical reforms — reversing the prevailing policy direction of the last four decades — will need to be put on the table. Governments will have to accept a more active role in the economy. Redistribution will again be on the agenda.”

Across the world now, politicians of many stripes, economists of almost all stripes, and ordinary people of every stripe increasingly recognise the essential role of government action, funded by progressive taxation.

Tackling inequality is central to restore consumer demand, strengthen human capital, ensure collective health security and prevent societal breakdown. If we allow inequality to rise any higher, we will all be in danger – of an even more intensified economic crisis and of violent instability.

For the rich to hide in bunkers, offends others’ dignity and their own, and is no way to truly thrive. Even before Covid-19, a multimillionaire whom I visited in Brazil could, when he looked out of his window, see only metal bars, as if he was caged in.

From my window in Denmark, the view is of flowers. As is noted in The Spirit Level, and in the yearly World Happiness Report, more equal societies are safer, healthier, happier, and more stable. They have longer-running growth, and higher social mobility. And they are much better able to cope with crises.

The Covid-19 pandemic is revealing not only how unjust the world’s inequalities are, but also how these inequalities have been rooted in a fallacy that denied the reality of our interdependence.

The difference between clinging to individualized and inward-looking approaches, and unleashing the power of collective action from the local to global, will be millions of lives saved and billions of lives improved.

Higher taxes on very wealthy few, and on the biggest corporations, are crucial to restoring trust and to funding the common services we all need to thrive. Through this we can put the world back in business, and reconnect business with the world. It’s worth every penny. Even millionaires should back it.

*This piece was co-authored with Ben Phillips, an advisor to governments and international institutions on how to tackle inequality.